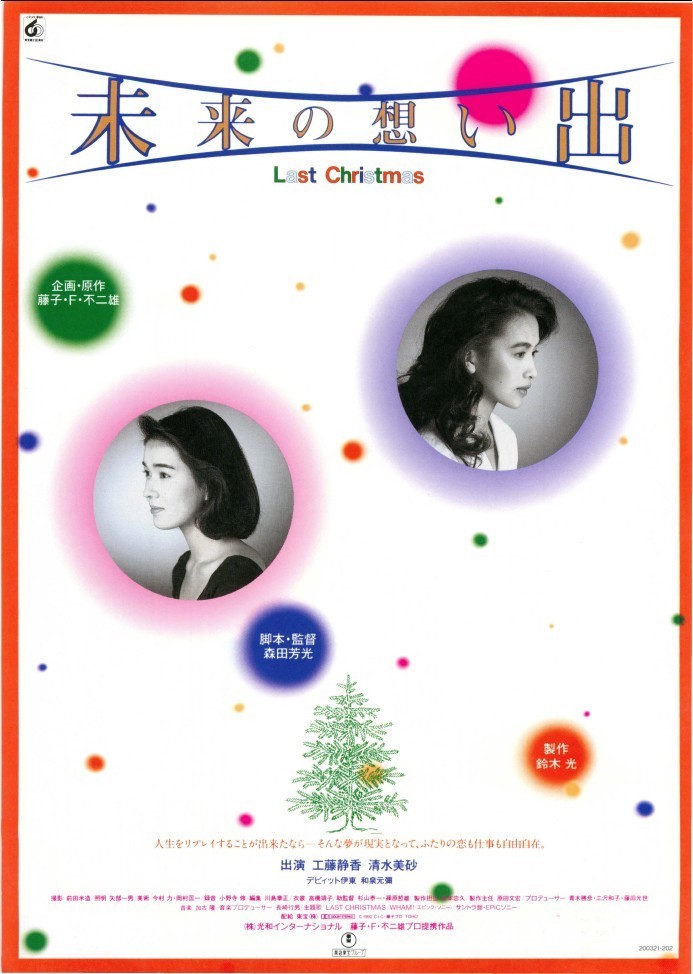 Based on the contemporary manga by the legendary Fujiko F. Fujio (Doraemon), Future Memories: Last Christmas (未来の想い出 Last Christmas, Mirai no Omoide: Last Christmas) is neither quiet as science fiction or romantically focussed as the title suggests yet perhaps reflects the mood of its 1992 release in which a generation of young people most probably would also have liked to travel back in time ten years just like the film’s heroines. Another up to the minute effort from the prolific Yoshimitsu Morita, Future Memories: Last Christmas is among his most inconsequential works, displaying much less of his experimental tinkering or stylistic variations, but is, perhaps a guide its traumatic, post-bubble era.

After a short segment set in 1971 in which one of our two heroines, Yuko Nando (Misa Shimizu), tells her classmates of her dream to become a best selling children’s author, we flash forward to 1981 where Yuko is a struggling artist unable to find success with her publishing company. A decade later, Christmas 1991, Yuko seems to have made little progress and despondently finds herself bonding with a mysterious woman offering a fortune telling service at the side of the road.

Ginko Kanae’s (Shizuka Kudo) life also seems to have spiralled downwards since 1981. A career as an office lady led to a fateful party after which another girl ended up going home with the guy she liked, and then she ended up being rebound married to the second choice salaryman she wound up with. Hence she’s reading fortunes on a less than busy side street at Christmas. The two women bond and swap phone numbers, but tragedy is about to befall them both as Yuko has a heart attack and dies at an office golf outing and Ginko has an accident on the way back from attending Yuko’s funeral. Never fear, the two women are soon cast back to 1981 with the next ten years of memories intact to help them make “better” choices and hopefully save their futures from ruin.

1992 was the start of a difficult era for Japan, the collapse of the bubble economy left behind it not just financial instability and social uncertainty, but a lingering feeling of foolishness and betrayal among those who’d been promised so much during the bubble years only to have the rug cruelly pulled from under them. It’s not surprising that many people of around Yuko and Ginko’s ages may have liked to travel back to 1981 and either relive the boom years or try and prevent the resultant tragedies from occurring. Unsurprisingly, the pair’s first pass at a do over sees them striving for conventional success, using their future knowledge to their advantage – Yuko by appropriating the idea of a popular 1991 manga to become an award winning artist, and Ginko becoming a financial guru. Both women come to feel conflicted about their “dishonest” choices which see them prosper unfairly, ironically robbing them of the chance to succeed as individuals in their own right and fulfil their own potential in the way they had always wanted to.

After each die at the same point and in the same way once again despite their financial successes, they get a second go, now with twenty years of hindsight to help them work out what’s really important. This time each chooses a path filled with more individual expression and the expectation of happiness. Romance is the name of the game as both women vow to spend more time with the men they love. However, having been through this once before Yuko and Ginko also have an expectation that their time will end once again in December 1991, meaning they feel conflicted about making a life with lovers they’ll be leaving behind. Gradually each starts to wonder if their fates are really as sealed as they fear them to be, or if they’ve been given this chance to start again precisely so that they can change their futures for the better.

In 1992, the idea that everything doesn’t have to be as gloomy as it seems might have been an important one, even more so than it is now. In the original timeline, Yuko and Ginko were, like many in the post-bubble world, victims of circumstance rather than people who’d actively made poor choices and the lessons which they learn are also those of their generation. Financial success is not everything, particularly if it’s gained in a “dishonest” way. More than changing their fates, Yuko and Ginko must first learn how to be happy which lies in self realisation, fulfilled potential, and, ironically, that their fate doesn’t matter so long as they live happily in the now.

Morita’s approach is again a timely one, filled with the music of the era (including a cover version of the title song from previous Morita hit, Main Theme), stock footage, and a curiously retro, nostalgia filled approach for a period that was only a decade earlier. Dissolves, slow motion and double exposures are his concessions to the sci-fi themes, but what he’s really interested in is capturing the essence of the era more so than crafting an emotionally affecting piece. Necessarily of its time, Future Memories: Last Christmas is among Morita’s weaker efforts but does serve to shine a light on early ‘90s pop culture as it found itself in a moment of profound self reflection.

Original trailer (no subtitles but lots of Christmas Cheer…and…Wham) 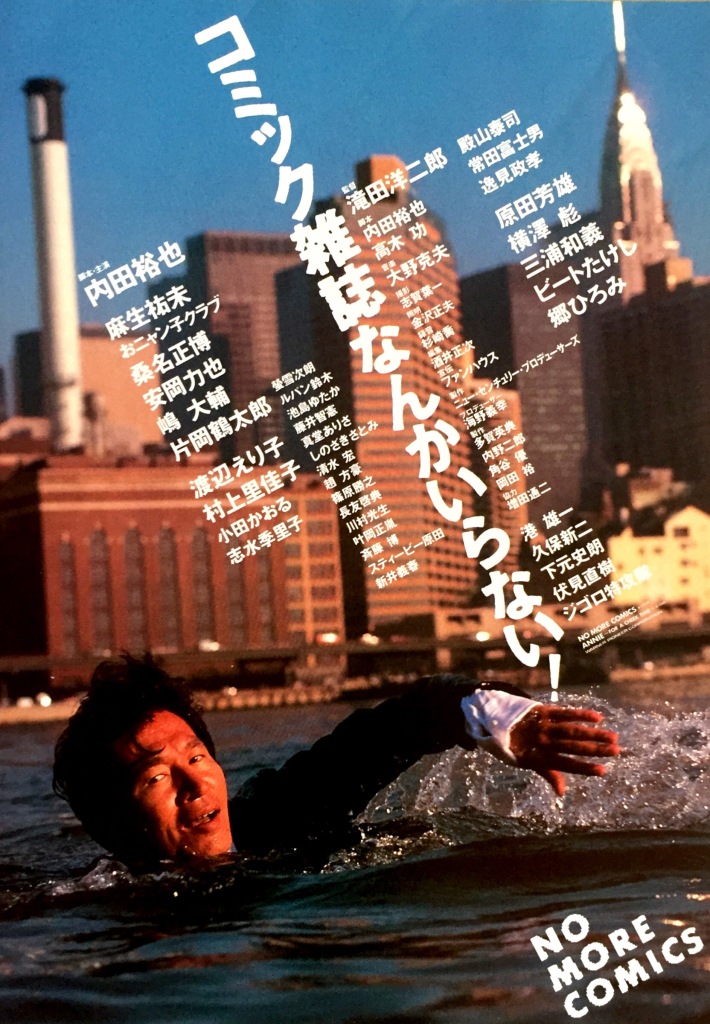 The word “paparazzo” might have been born with La Dolce Vita but the gossip hungry newshound has been with us since long before the invention of the camera. Yojiro Takita’s 1986 film No More Comics! (コミック雑誌なんかいらない, Komikku zasshi nanka iranai AKA Comic Magazine) proves that the media’s obsession with celebrity and “first on the scene” coverage is not a new phenomenon nor one which is likely to change any time soon.

Kinameri (Yuya Uchida) is a hack reporter on a gossipy news magazine programme which reports on all the sordid personal details of the private lives of celebrities. In a bit of neat meta commentary, we first meet him when he’s doggedly following real life top actress of the time Kaori Momoi (making a brief self cameo) as she tries to board a plane at the airport. Kinameri keeps on asking his inappropriate questions about her alleged relationship with a screenwriter whilst Momoi successfully ignores him before finally reaching the relative sanctuary of the security cordon preventing Kinameri from actually boarding the plane with her. Of course, his interview attempt has failed but he plays the footage on the programme anyway justifying her silence as a lack of denial and that he has therefore “proved” that the rumours are true.

Kinameri is both respected and ridiculed by his colleagues who praise his probing journalistic techniques which see him doggedly refusing to give up on a story but also find his intensity amusing seeing as he’s mostly chasing cheating spouses rather than uncovering the next great political scandal like his heroes who exposed Watergate. Having graduated from a top Japanese university in political sciences, this is far from the line of work Kinameri would want to be doing and its vacuity coupled with his own failed ambitions push him further and further into a spiral of self loathing and depression.

It’s not only celebrities either. Even if you could make a case that those in the entertainment industry have entered into a pact with the media and are, therefore, fair game, civilians and particularly victims of crime should be off limits. Kinameri will literally stop at nothing to scratch a up a story including attending the funeral of a murdered 14 year old girl and quizzing her mother over the rumours that the girl had been engaging in prostitution to try and elicit some kind of social commentary about the youth of today. After his programming starts to decline in popularity he’s relegated to the late night slot which involves visiting various shady places such as strip clubs, snack bars that are actually yakuza hang outs, and even the set of a porn film where he gets a cameo feeling up the lead actress in the front of a convertible.

While all of this is going on, Kinameri is also receiving some bothersome cold calls offering to sell him gold as an investment proposal. His elderly neighbour is visited by a woman from the company and does actually buy some but Kinameri smells a rat and his journalistic instincts kick back in. His bosses at the network aren’t convinced though – dodgy gold dealers doesn’t sound like a ratings winner after all and even when Kinameri agrees to even shadier assignments so he can pursue his leads, they still aren’t really behind him. Eventually they catch up but it’s almost too late.

Kinameri keeps doing what he’s paid to do, even if he clearly despises everything about it. Asking trivial and ridiculous questions and being ignored anyway, conducting a vacuous meet and greet with a gang of up and coming idol stars, even posing as a gigolo – there are no lengths to which he will not sink in pursuit of his story. By the film’s finale he’s still the frontline reporter, looking on while a vicious yakuza (played by a young Takeshi Kitano) commits a brutal murder right in front of the cameras. No one is moving, no one is trying to stop this, everyone is manoeuvring to get the best coverage. Kinameri has had enough and, with a look of rage and contempt on his face, he launches himself through the widow in a last minute attempt to make a difference but once again, lands up flat on his face and, finally, excluded from the action.

Years ahead of its time, No More Comics! takes an ironic look at invasive media coverage of celebrity gossip which clogs the airwaves while the real story is wilfully ignored. Ironically, Kinameri even becomes something of a celebrity himself, well known for his dogged interviewing style. He receives countless answerphone messages from “fans” (somehow ringing his personal phone number) either praising his efforts or berating him for not pushing his targets harder. When a young aspiring journalist stops him in the street and asks for advice, Kinameri doesn’t even answer but just walks away with a look of contempt and sadness on his face. Finally, after his mad dash into a crime scene in the final reel, he becomes the news himself. All of his fellow reporters suddenly want to know “what happened”, “what was it like”, “did you go in to save him or for the story?” etc. Still stunned and probably in need of medical attention, Kinameri looks directly into the camera, puts his hand across the lens and states “I can’t speak fucking Japanese”.

Filled with rage and shame, No More Comics! is a Network-esque satire on the world of live broadcast reporting exposing the seedier sides of journalistic desperation. Ahead of its time and sadly still timely in the age of 24hr coverage which mainly consists of the same trivial stories repeated ad nauseum, its messages are needed more than ever.