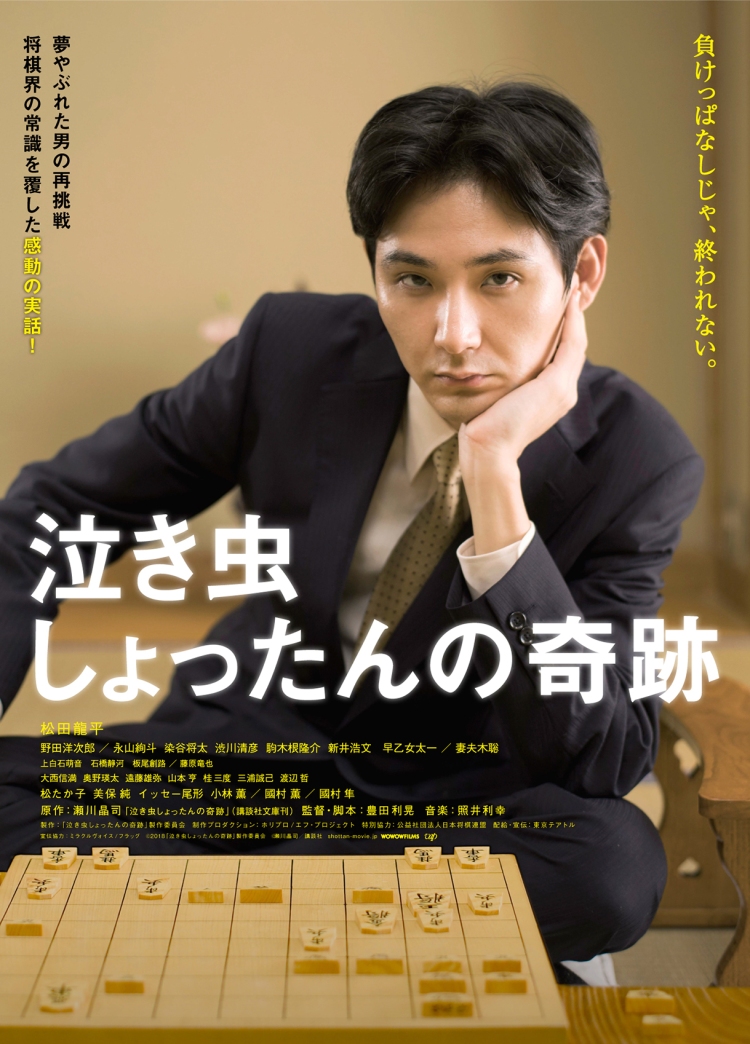 Toshiaki Toyoda burst onto the scene in the late ‘90s with a series of visually stunning expressions of millennial malaise in which the dejected, mostly male, heroes found themselves adrift without hope or purpose in post-bubble Japan. For all their essential nihilism however, Toyoda’s films most often ended with melancholic consolation, or at least a sense of determination in the face of impossibility. Returning after a lengthy hiatus, Toyoda’s adaptation of the autobiography by shogi player Shoji “Shottan” Segawa, The Miracle of Crybaby Shottan (泣き虫しょったんの奇跡, Nakimushi Shottan no Kiseki), finds him in a defiantly hopeful mood as his mild-mannered protagonist discovers that “losing is not the end” and the choice to continue following your dreams even when everything tells you they are no longer achievable is not only legitimate but a moral imperative.

An aspiring Shogi player himself in his youth, Toyoda opens with the young Shoji discovering a love of the game and determining to turn pro. Encouraged by his surprisingly supportive parents who tell him that doing what you love is the most important thing in life, Shoji (Ryuhei Matsuda) devotes himself to mastering his skills forsaking all else. The catch is, that to become a professional shogi player you have to pass through the official association and ascend to the fourth rank before your 26th birthday. Shoji has eight chances to succeed, but in the end he doesn’t make it and is all washed up at 26 with no qualifications or further possibilities seeing as he has essentially “wasted” his adolescence on acquiring skills which are now entirely meaningless.

As his inspirational primary school teacher (Takako Matsu) tells him, however, if you spend time indulging in a passion, no matter what it is, and learn something by it then nothing is ever really wasted. Shoji’s father says the same thing – he wants his son to follow his dreams, though his brother has much more conventional views and often berates him for dedicating himself to shogi when the odds of success are so slim. It may well be “irresponsible”, in one sense at least, to blindly follow a dream to the exclusion of all else, but then again it may also be irresponsible to resentfully throw oneself into the conventionality of salaryman success.

Nevertheless, shogi is a game that drives men mad. Unlike the similarly themed Satoshi: A Move for Tomorrow, also inspired by a real life shogi star, The Miracle of Crybaby Shottan has a classically “happy” ending but is also unafraid to explore the dark sides of the game as young men fail to make the grade, realise they’ve wasted their youths, and retreat into despair and hopelessness. Shoji accepts his fate, internalises his failure, and begins to move on neither hating the game nor loving it, until finally reconnecting with his childhood friend and rediscovering his natural affinity free from ambition or desire.

Another defeated challenger, expressing envy for Shoji’s talent, told him he was quitting because you can’t win if you can’t learn to lose friends and he didn’t want to play that way. Shoji doesn’t really want to play that way either, freely giving up chances to prosper in underhanded ways and genuinely happy for others when they achieve the thing he most wants but cannot get. He does in one sense “give up” in that he accepts he will never play professionally because of the arbitrary rules of the shogi world, but retains his love of the game and eventually achieves “amateur” success at which point he finds himself a figurehead for a campaign targeted squarely at the unfair rigidity of the sport’s governing body.

Shoji’s rebellion finds unexpected support from all quarters as the oppressed masses of Japan rally themselves behind him in protest of the often arcane rules which govern the society. As his teacher told him, just keep doing what you’re doing – it is enough, and it will be OK. Accepting that “losing is not the end” and there are always second chances even after you hit rock bottom and everyone tells you it’s too late, a newly re-energised Shoji is finally able to embrace victory on equal terms carried solely by his pure hearted love of shogi rather than by ambition or resentment. A surprisingly upbeat effort from the usually melancholy director, The Miracle of Crybaby Shottan is a beautifully pitched reminder that it really is never too late, success comes to those who master failure, and being soft hearted is no failing when you’re prepared to devote yourself body and soul to one particular cause.

The Miracle of Crybaby Shottan was screened as part of the 2019 Nippon Connection Film Festival.