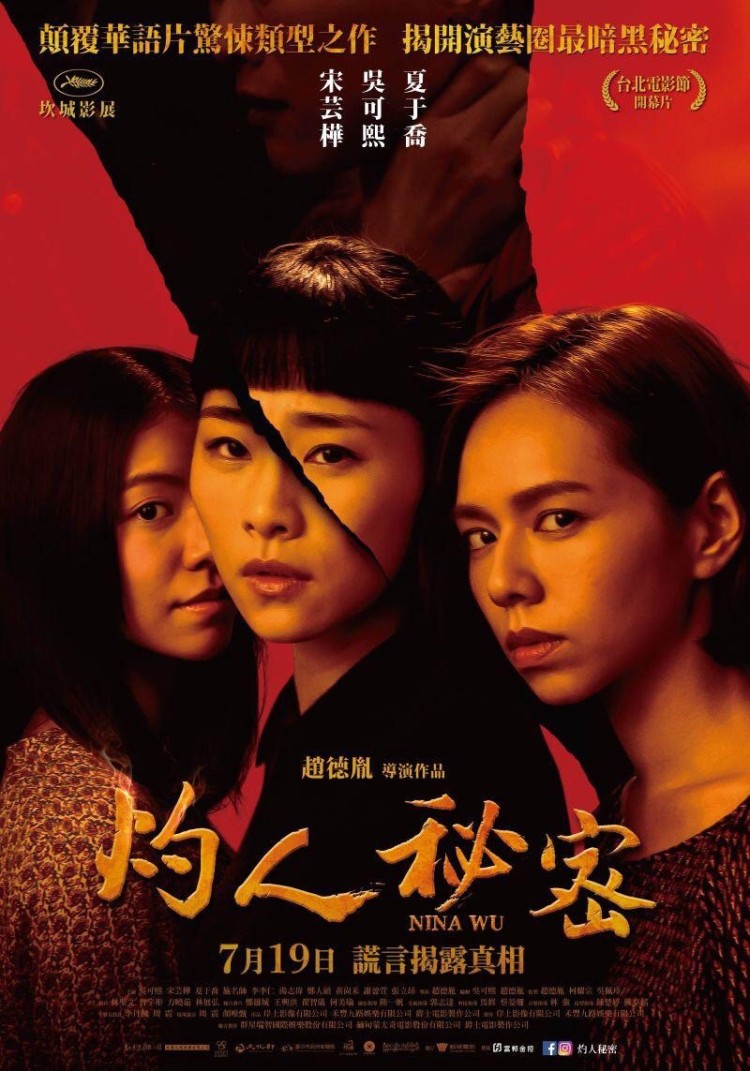 “They’re not just destroying my body but my soul” complains an exploited woman in a film within a film, “I’ll do something you’ll all regret” she adds, only the actress never will. Penned by leading actress Wu Ke-xi, Nina Wu (灼人秘密, Zhuó Rén Mìmì) provides a timely exploration of the gradual erasure of the self the pursuit of a dream can entail in a fiercely patriarchal, intensely conservative culture. Arriving in the wake of the #metoo scandal the film goes in hard for industry exploitation but never tries to pretend that these are issues relating to the film industry alone or deny the various ways it informs and is informed by prevailing social conservatism.

Originally from the country, the titular Nina Wu (Wu Ke-xi) has been in Taipei for eight years trying to make it as an actress but is still awaiting that big break. Aside from some small bit parts and commercial jobs, she supports herself by working in restaurants with a side career as a live-streaming webcam star. Then, just as she’s starting to think it’s too late, a call comes through – she’s in the running for the lead in a high profile period spy thriller. The only snag is that the part requires full frontal nudity and explicit sex scenes.

Nina is understandably conflicted. Aside from the potential discomfort, taking a part in the kind of film this could turn out to be is a huge gamble that could either make or break her career (just look at what happened to Tang Wei after Lust Caution, itself a period thriller about a female assassin who falls for her target). Nina’s unsympathetic agent skirts around the fact this might be her last chance while promising to respect her decision, implying it’s this or nothing. Of course, neither he nor the sleazy director inviting parades of identically dressed hopefuls up to his hotel room where he forces them to engage in dubious acts of degradation for his own enjoyment will admit that the reason they want a “fresh face” isn’t for any artistic motivation but that no well established actress with a proper agent would ever take a role like this (and even if she did, she couldn’t be pushed around in the same way).

Convincing herself to do whatever it takes, Nina takes the part but goes on to suffer at the hands of a controlling and tyrannical director who psychologically tortures and physically abuses her supposedly in order to get the performance he wants rather than the one she chooses to give him. A repeated motif sees hands continually around Nina’s throat as if she were being permanently strangled, unable to speak or express herself, permitted breath only when compliant with the desires of men.

Subsuming herself into the part, Nina avoids having to think about the various ways her offscreen life is also a performance or of her own complicity in the erosion of her emotional authenticity. A visit home reveals a difficult family environment with a father (Cheng Ping-chun) losing out in the precarious modern economy, while she, now the “famous actress”, wonders if she was happier as an am dram bit player staging inspirational plays for children. The secret she seems so desperate to conceal seems to be her same sex love, sacrificed for a career in Taipei and now perhaps unsalvageable. Her lover has moved on, preparing to marry a man and embark on a socially conventional life. If she too has made her peace with sacrificing a part of her true self, she does at least seem superficially “happy” in contrast to Nina’s gradually fracturing psyche.

Meanwhile, Nina becomes paranoid that a mysterious woman is stalking her. Apparently another hopeful also driven mad by the demands of an exploitative industry, the woman is convinced Nina has taken what was rightfully hers and done so by selling her body for career advancement. Yet as time goes on we begin to wonder if the film ever happened at all or is only a part of Nina’s fabricated delusion sparked Marienbad-style by the single traumatic event on which the film ends, filled as it is with a lingering sense of tragic defeat. Nina Wu never takes her longed for revenge, even if she (perhaps) gains it in a kind of success, but silently endures as the misuse of her body begins to destroy her soul and leaves her nothing more than an empty vessel on which the desires of others are projected.

Nina Wu was screened as part of the 2019 London East Asia Film Festival. 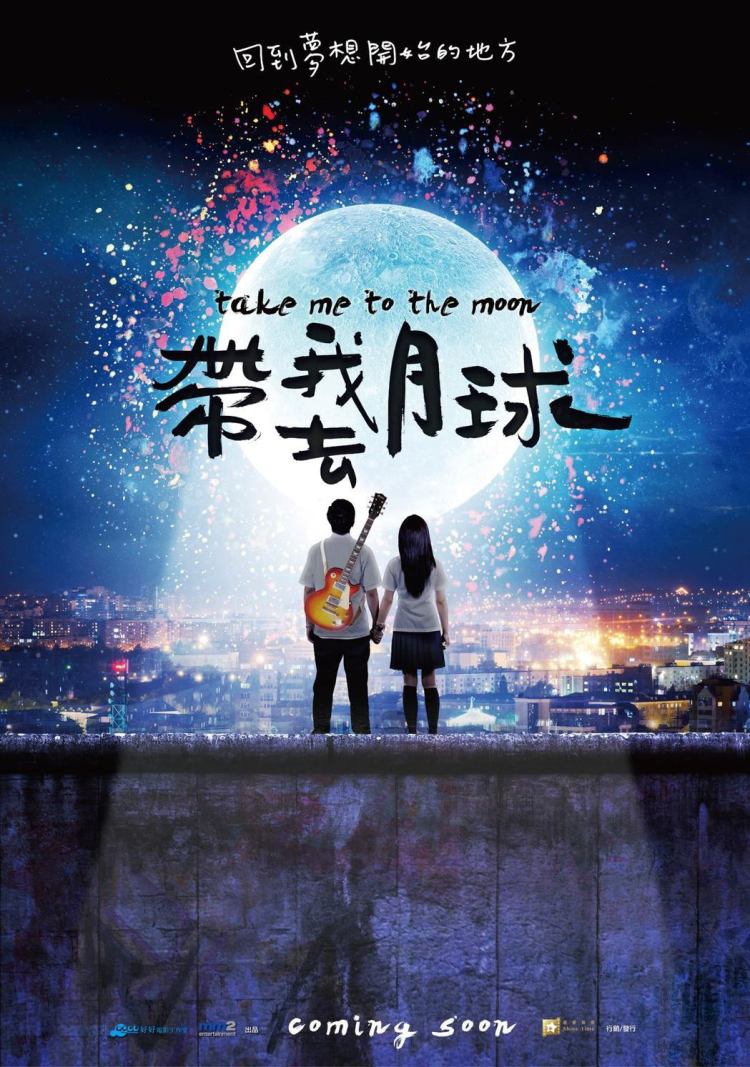 Should you continue pursuing your dreams even after you know they won’t come true or just give in and live a dull but comfortable life of conformity? These are questions most young people face at one time or another, but for the hero of Hsieh Chun-Yi’s Take me to the Moon (帶我去月球, Dài Wǒ Qù Yuèqiú), they take on an extra dimension when he is suddenly thrown back into the past with an opportunity to “save” the life of a friend if only he can convince her to abandon her dreams of stardom and stay home instead. A melancholy nostalgia fest for late ‘90s Taiwan (and the late ‘90s in general), Take me to the Moon is an ode to lost opportunities, words unsaid, and the immutability of the past which nevertheless makes room for the odd miracle or two as its hero realises perhaps he’s not grown up as much as he thought.

Three years prior to the main action, 30-something Wang (Jasper Liu) takes a business trip to Tokyo where he reconnects with high school friend Emma (Vivian Sung) who won a prestigious competition to go to Japan and train with a big idol producer. Sadly, Emma’s dreams have not panned out and she’s embarrassed to let her old friend see just how badly things have been going for her. Fast-forward three years to the present and Emma has unfortunately passed away at only 38 after years of hard drinking in hostess bars, poor nutrition, and overwork finally caught up with her. The once tight group of high school bandmates, two of whom have become a married couple, argue over their collective failure to save their friend at which point Wang walks out, meets a weird old woman who gives him some strange flowers, and is knocked over by a car only to wake up back in 1997. Desperate to save Emma, Wang thinks his best bet lies in ruining her chance to go to Japan so that she will never experience the failure of her hopes and dreams and will stay home to live a simpler, safer life.

Filled with a youthful nostalgia and feeling of authenticity, Take me to the Moon makes the most of its ‘90s setting, recreating the late 20th century city through impressive CGI. Wang reacquaints himself with his teenage self, retrieving his well hidden box of tame pornography and enjoying another few bowls of his mother’s delicious fish soup, but his main goal is essentially to ruin the dreams of his friend – an act of betrayal which might be in her interest, but then again it isn’t Wang’s choice to make and perhaps Emma would rather follow her heart even if it means it’s going to get broken.

What Wang eventually realises, as one of the Tom Chang tracks which pepper the narrative points out, is that what he should have been treasuring was the extra time spent with friends rather than worrying about the future. Back in his teenage years Wang was too shy to confess his lifelong crush on Emma and then went on to be plagued by classic bad timing in adulthood until finally it was too late. His attempts to “save” Emma by ruining her life are in part selfish but also cowardly in taking the place of simply saying the things he needed to say at the right time. Finally figuring this out, Wang realises that he can’t “save” Emma like the hero of a time travel movie by manipulating the past, but he has been given a second chance to let her know how he felt. This, in the end, is what may finally, really “save” his friend – simply letting her know that he is there supporting her, that she’s fine as she is and doesn’t need to be “perfect” to be loved as her overbearing parents have led her to believe.

Though Wang awakens to a more positive change than he might have expected, the general idea is that you can’t rehash the past and should make sure that you’re happy with your present to avoid the desire to try. Having given up on his youthful dreams for a lonely corporate existence, middle-aged Wang regains a little of his essential self and decides to fight for a more authentic way of life even if it doesn’t really go anywhere. Warm and fuzzy yet also strangely melancholy, Take me to the Moon is another in a long line of Taiwanese high school nostalgia movies but proves a fitting tribute both to its era and the singer songwriter featured throughout who himself died young in a tragic car accident in 1997 aged just 31.