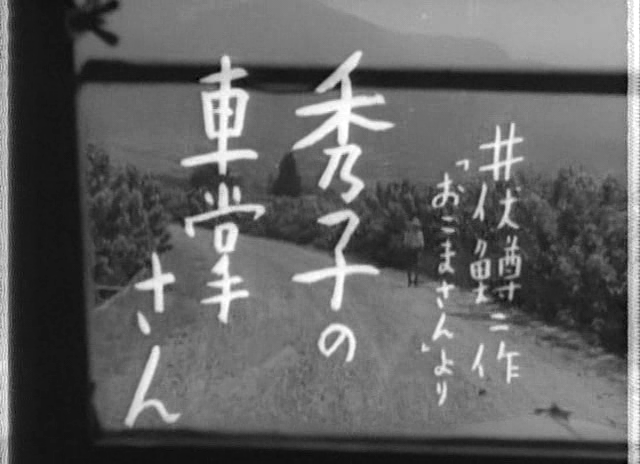 It’s true enough that we might not have enough extant material from the pre-war and wartime eras to be as selective as some might accuse of us of being on realising that the directors we tend to remember are the ones we see as resisting. Though there were a fair few who managed simply to steer clear of the prevailing ideology, most skirted their way around the demands of the censors board by embracing the kinds of themes they could would work with. In Hideko, the Bus Conductor (秀子の車掌さん, Hideko no Shasho-san) Naruse pushes in a slightly different direction, retreating almost entirely from the troubles of the contemporary era into an idyllic vision of pastoral Japan.

Echoing Mr. Thank You, he opens with a POV shot of bus travelling a rural road accompanied by jaunty music. Neatly undercutting the cheerful atmosphere with ironic absurdity, we then cut to bus conductress Okoma (Hideko Takamine) announcing the next stop to an entirely empty bus. The problem is, the bus Okoma and the driver, Sonoda (Kamatari Fujiwara), operate is old, slow, and dirty. A new company, Kaihatsu, recently launched with shiny new buses that are cleaner and faster, if a little more expensive. Unsurprisingly, most people prefer to travel with Kaihatsu, meaning the only passengers waiting for Okoma’s bus are the kind that don’t have much money or are looking for different kinds of service – e.g. transporting live chickens or unusually large amounts of bags.

A radio programme recommended by her landlady gives Okoma an idea to boost business – performing as a kind of tour guide reading out interesting facts about the local area to entertain the passengers. Unfortunately, no one can quite think of any interesting facts or local landmarks in this tiny rural backwater. Nevertheless, Okoma and Sonoda are determined to give it a go, eventually obtaining permission from the decidedly laissez-faire boss who spends most of his days guzzling ramune and eating kakegori. To make sure the service is professional, they enlist the services of a local writer, Ikawa (Daijiro Natsukawa), whose notebook Okoma once returned when he left it on the bus. Weirdly, he doesn’t even want paying because he enjoys writing this kind of thing, and even coaches Okoma on how to get the cutest accent to really attract those customers with adorable local charm (even though Okoma is very proud to be thought of as nicely spoken young lady with nary an accent at all).

Of course, in true Naruse style, it’s not quite as idyllic as it seems. Most of the people we meet are poor and struggling, that’s why they’re taking this bus and not Kaihatsu’s. Even so, they’re all pleasant and polite, not even minding when Okoma asks the driver to stop by her house so she can chat with her mother, giving her a kimono she’s bought as a present (that her mum tells her off for spending her money on) and swapping her worn out cloth shoes for a classic pair of geta in which she seems to be more comfortable. At one stage, a chicken escapes from the bus and they stop to catch it, timetable be damned. Mind you, there don’t even really seem to be specific stops on this strangely occasional service. In need of passengers, Okoma and Sonoda seem content to stop and pick up random passersby who might be in search of a lift, taking them to wherever they might want to to go.

That might be one reason explaining why Okoma’s landlady is keen to warn her that she’s heard the bus company is no good, it’s just a front for some kind of unspecified shadiness. The truth, however, is more that the boss seems to be the feckless sort who enjoys being bossy but has no idea how to run a business. Distracted by Okoma’s monologue, Sonoda starts forgetting to stop and pick people up and eventually has to slam on the brakes when a child runs out into the street. While they’re checking on the kid, the bus rolls back over the verge, injuring Okoma and landing in farmland. Reassured that no-one has been “seriously” hurt (he’s not getting sued), the boss is then more worried about the insurance, seeing as it doesn’t cover him if the engine was running while they were stopped. Even though Sonoda explains that there’s no damage except maybe a scratch on the side, the boss suggests he scupper the engine and smash the windows so they can claim. They need a better bus, otherwise the company will have to close.

Earlier on, Sonoda and Okoma had joked about a popular slogan “When a country gets confused, loyal subjects appear”. Sonoda rolls his eyes a little and calls it “bombast”. They might not object to adding a bit about birds singing for the emperor’s long reign to their monologue, but it’s plain they aren’t going to go along with something they think is wrong because the boss says it’s a good idea. Sonoda is a little conflicted to begin with, talking it over with Ikawa who acts as the slightly patronising voice of city sophistication, he realises that if he follows the boss’ orders and lies he’ll not only be cheating the rest of society but himself too in doing something he knows to be immoral. Both he and Okoma vow they’ll quit rather than be forced into dishonesty, after all, says Okoma, there are plenty of other jobs (or perhaps not, in real terms, but still there is a choice). Suddenly, they feel quite cheerful, buoyed by their sense of moral righteousness.

An intervention from Ikawa saves their jobs, but this is still a Naruse film in which the world will always betray us, and so Okoma and Sonoda cheerfully continue their tour guiding business little knowing that the boss has gone bust and sold the bus. It might be going too far to say that Naruse envisages a fiery crash, a rude awakening for Okoma and Sonoda who will be left with only the cold comfort that they stood up against authoritarianism when it all goes to hell, but the subtle allegory is all but unmissable. Absurdly cheerful, and just a little bit depressing if you stop to think about it, Hideko the Bus Conductor is a charming jaunt through rural ‘40s Japan filled with salt of the earth types just trying to muddle through while the big bosses put their feet up and pop ramune marbles all day long without a care in the world. 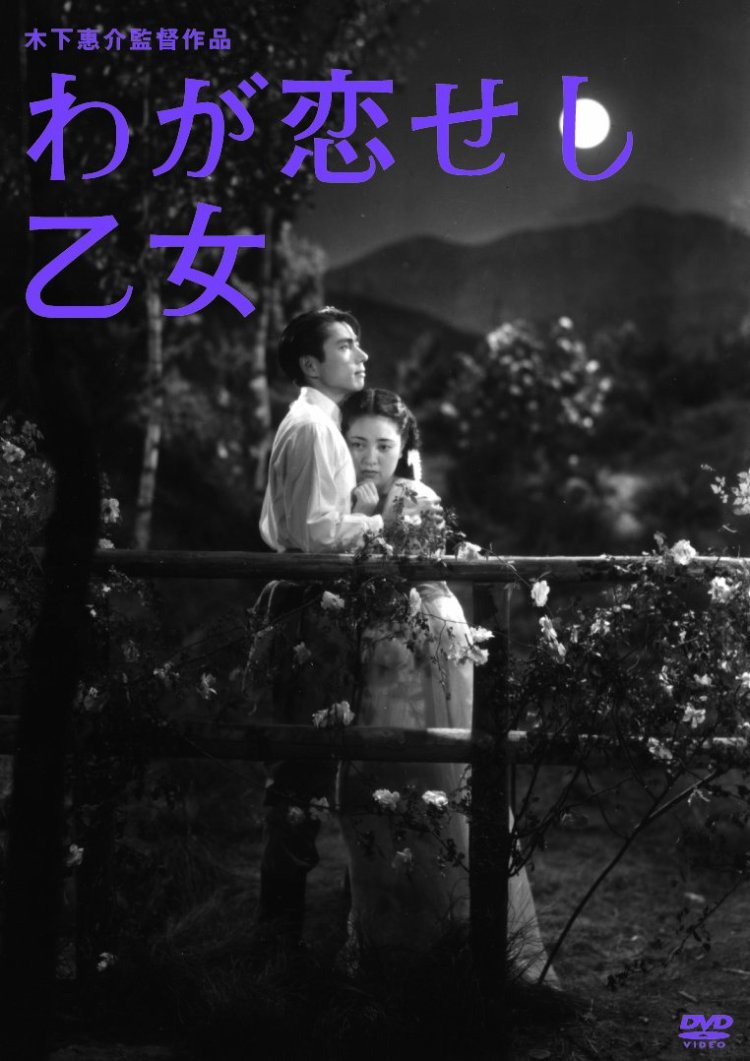 The post-war era, as confusing and chaotic as it was, offered several choices, among them that to change to course, choose to create a better, kinder world than the one which had led to so much suffering. As always, however, the human temptation is to choose the opposite and allow anger and resentment to make everything even worse than it had been before. Occasionally censured for his sentimentality, Keisuke Kinoshita was perhaps among the more defiantly positive of the post-war humanists whose fierce love human goodness knew no bounds. In The Girl I Loved (わが恋せし乙女, Waga Koiseshi Otome) he puts his ideas to the ultimate test as a young man recently returned from the war must learn to cope with various kinds of disappointment but eventually resolves to take solace in other people’s happiness even at the cost of his own.

The tale begins some years earlier when a baby girl is abandoned in front of the Asama Ranch, her mother apparently having taken her own life by jumping from a nearby cliff. The Asamas are good people and moved by the letter they find with the baby so decide to take her in. Yoshiko (Kuniko Igawa) is raised alongside older brother Jingo (Yasumi Hara) as an adopted sister always aware of her origins but very much a full member of the family.

Flash forward to the present day and Yoshiko has become a beautiful young woman. Jingo has returned from five years of war in perfect physical health, keen to resume his idyllic farm life in the beautiful Japanese countryside. The fact is that Jingo has long been in love with Yoshiko, though the situation is understandably complicated seeing as they were raised as siblings even if there is no blood relation between them. Somehow it seems a perfectly natural idea that the pair will marry and many assume this will be the case. Jingo, however, remains somewhat reticent and afraid to voice his feelings. It seems Yoshiko has something to tell him too and so he dares to hope as they both agree to share their respective secrets after the harvest festival.

At the festival, however, Jingo gets a shock. He sees the way Yoshiko looks at another man and realises that what she wanted to tell him was probably that she had fallen in love with someone else. Shaken and confused, Jingo bites his tongue. He knows to say anything now would only create more pain and suffering for everyone while he alone will suffer if he decides to stay quiet.

Nevertheless the temptation is there. Mr. Noda (Junji Soneda), Yoshiko’s intended, is a quiet man, an intellectual who returned from the war early thanks to injury and still walks with a cane. Yoshiko has been fearful that her family may object to the marriage on the grounds of Noda’s disability – something he has also been aware of and warned her about in explaining the potential hardship she may have to endure as his wife seeing as he is also merely a poor schoolteacher. Jingo could try to refuse her permission to marry, try to force her to marry him instead, or refuse to give his blessing for her to marry anyone at all, but if he did that all he’d be doing is condemning both of them to eternal misery. It would be understandable if he began to resent Noda and most particularly his disability which brought him home from the war early and enabled him to be here to fall in love with Yoshiko while Jingo was away and dreaming of home, but then it could so easily have been the other way around.

In the end, Jingo’s love is selfless and good. What he wants is for Yoshiko to be happy and if being with Noda is what that means then Jingo will not stand in her way no matter how much it may hurt him to stand aside. After all, as Noda says, aren’t they both lucky to be alive in this beautiful place? Having suffered so much, the two men understand how precious life is and know it’s far too short for pettiness or resentment. A quiet, gentle tale The Girl I Loved is a sad story of youthful disappointment in love, but it’s also a kind of melancholy manifesto for the new post-war world built on compassion and understanding as a young man decides to take the noble path in accepting that the girl he loved loves someone else and that’s sad but it’s also happy and if you can learn to rejoice in someone else’s happiness even in the midst of your own pain then perhaps everything will be alright after all.

Titles and opening scene (no subtitles)