Written by Hayley ScanlonPosted on July 26, 2018Leave a comment 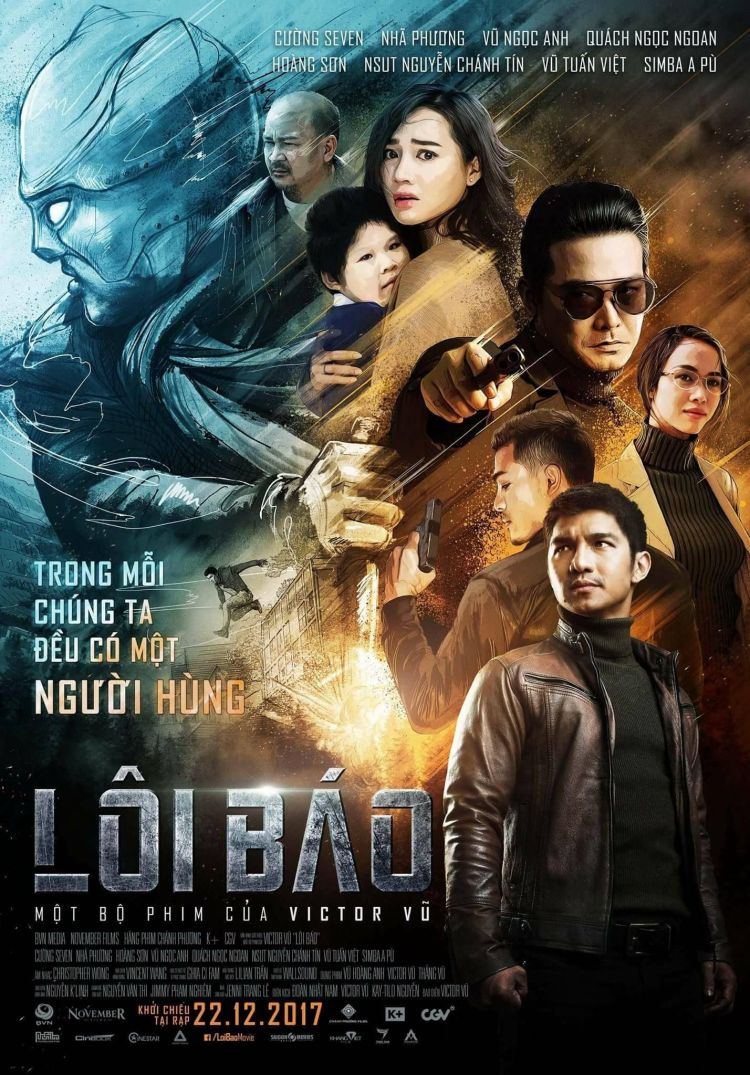 The world can be a strange place. Tam (Cuòng Seven) felt safe in his small town surrounded by his wife and son who were determined to support his artistic dream despite its long genesis, but a dark shadow is about to be cast over his otherwise pleasant existence that will threaten to destroy everything he has built. Victor Vu’s Lôi Báo is perhaps Vietnam’s first superhero movie but it’s also a familiar tale of a conflicted man entering middle-age learning to reaccept his responsibilities, both to his wife and son and to his society as he attempts to balance his desire to help others with that of protecting his family. With great power comes great responsibility as the saying goes and Tam is a responsible guy but the past is calling him and he’ll need to face it head on if he’s to put his fracturing family back together.

Six years after his critically acclaimed graphic novel Descendents of the Crossbow, comic book artist Tam has just come out of a period of writer’s block and is working on a new project – an American-style Superhero book about a pure hearted warrior for justice with intense fighting skills and extreme athletic ability. Not many people are convinced by Tam’s desire to create a Vietnamese superhero, but his family support him and that’s all that matters. In fact, they literally support him because his wife Linh’s (Tran Thi Nha Phuong) coffeeshop is the family’s sole source of income. Tam has a tendency to get lost in his work, which is one reason he’s been putting off seeing the doctor about a serious cough that just won’t go away. When he finally decides to get it checked out it’s already too late – he has terminal lung cancer and only a few months left to live. It’s at this point that his life starts to take a strange, unexpected turn. Uncle Ma (Huàng Son), an older man Tam thought was a farmer, is actually a secret mad scientist who has a hidden laboratory in his garden where he continues to research human head transplants. The obvious conclusion presents itself – Tam decides to undergo experimental surgery to abandon his cancer ridden body and move into a nice new model.

Lôi Báo is the latest in the long line of movies indulging in the thoroughly B-movie science of “Cellular Memory”. Illegal head transplantation is already somewhat unethical, but Tam and Ma acquired their donor body through less than ethical means by grabbing a guy who was mysteriously gunned down in a forest where Tam had just tried to commit suicide out of total despair. Of course, the dead “gangster” came with his own share of baggage which leaves Tam feeling much more impulsive had than he had done before and though he seems to have lost the ability to draw, Tam is thrilled that his new body seems to be a much stronger, faster model than his old one. Not quite able to leap tall buildings in a single bound, Tam can now scale them with little difficulty and lift heavy vehicles all alone. Now he no longer needs to draw superhero stories, he can be a hero for real fulfilling his lifelong dream of being able to save lives and protect the vulnerable from evil.

Only, his new body is not quite so altruistic as he once was, and Tam begins to get off on the fame his newfound heroism is bringing him even while it puts his family danger should anyone find out about all the illegal head transplantation action that’s been going down at uncle Ma’s. He also finds himself strangely drawn to a pretty young doctor who might have been something to the dead gangster, further distancing him from Linh and his son Bu. As expected, there was a little more to the gunfight in the woods than a gangster squabble and Tam will have to learn to put body and soul back together while also dealing with the ghosts of his past and a latent discomfort with the idea of being a husband and father which betrays a lack of faith in the idea of “family” itself.

With plenty of high octane action scenes, Lôi Báo more than does its home genre justice, creating a notably mature origin story for a new kind of superhero who accepts that perhaps he’s not the hero in this story after all. Justice is served, the family repaired, the past laid to rest and there might even be a new book in it too. It has been a busy a few months for Tam, but at least he’s learnt the true meaning of heroism – something which will place him in good stead during his eagerly awaited further adventures!