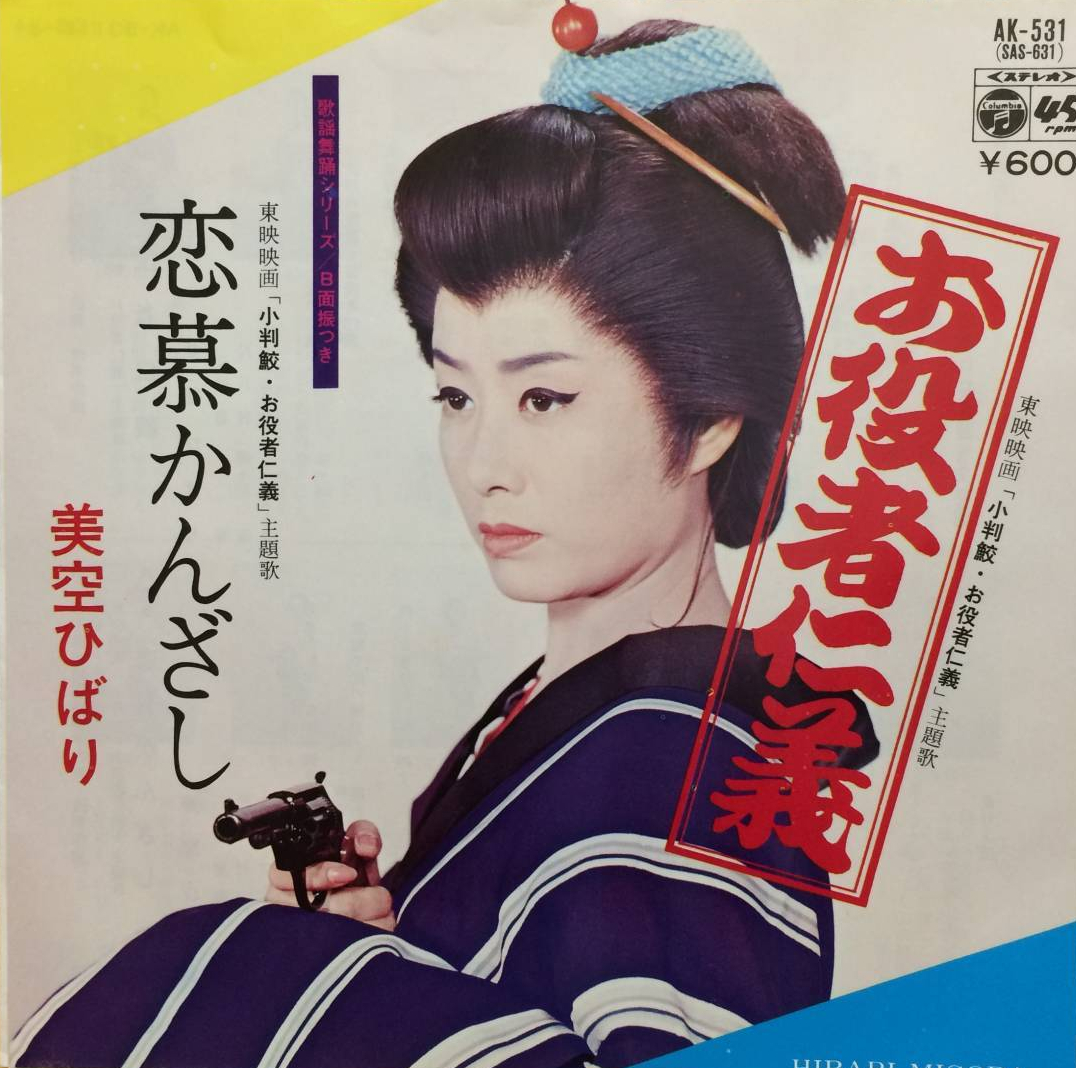 Written by Hayley ScanlonPosted on January 16, 2019Leave a comment 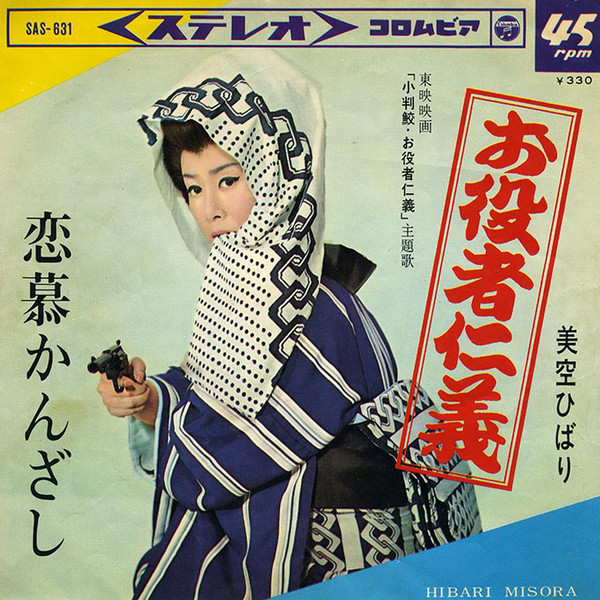 A studio director at Toei, Tadashi Sawashima is best remembered for his work in the studio’s ninkyo eiga genre – prewar tales of noble gangsters, and samurai movies but he also made the occasional foray into the world of musical drama, teaming up with top name singing star Hibari Misora on a few of her historical action musicals. In 1966’s Actress vs. Greedy Sharks (小判鮫 お役者仁義, Kobanzame Oyakusha Jingi) Hibari once again plays a dual role though this time her casting is entirely arbitrary and the visual similarity of the legit actress and the acrobatic outlaw is never explicitly remarked upon.

The action opens with Shichi (Hibari Misora), an acrobat and member of a Robin Hood style band of outlaws (they don’t so much give to the poor as “share” with the less fortunate) interrupting the plot of Yamitaro (Yoichi Hayashi) – a nobleman in disguise to pursue revenge against corrupt lord Doi (Eitaro Shindo) who exiled his father to Convict Island when he began to raise questions about judicial corruption. Meanwhile, Yuki (also played by Hibari) is a top stage actress who is plotting against Doi for sending her father to Convict Island 20 years previously on a trumped up charge. Just as the “tomboyish” Shichi is beginning to fall for the mysterious Yamitaro, he teams up with Yuki to pursue their mutual quests for revenge which has Shichi feeling (needlessly, as it turns out) betrayed and vengeful.

Once again, the samurai order is shown to be corrupt beyond redemption. Doi, a greedy lord, is planning to sell off his only daughter, Ran (Yumiko Nogawa), as a concubine to the shogun. Meanwhile, he is also engaging in a rice profiteering scheme in order to bolster his financial resources. He is also still misusing his influence, just as he did when he had Yuki’s father sent to prison and got rid of Yamitaro’s so he couldn’t expose him.

As in her other movies, Hibari cannot allow this corruption to continue and becomes a thorn in the side of authority. However, the situation this time around is further complicated by her double casting in which she plays two visually identical characters who are, nevertheless, entirely unrelated and the resemblance between them entirely unremarked upon. The “tomboyish” Shichi, apparently falling in love for the first time much to the confusion of herself and others who regarded her lack of traditional femininity as a barrier to romance, becomes awkwardly resentful of the graceful Yuki whose charms she assumes will sway the handsome Yamitaro. Shichi does not seem to consider a class barrier between herself and Yamitaro as a problem but fears his natural affinity with a woman she perceives as superior to herself in her refinement, yet Yuki proves herself as staunch a fighter as Shichi and just as feisty. She appears to have little romantic interest in Yamitaro even if she resents Shichi’s rather blunt instructions to back off, and aside from concentrating on her revenge, spends the rest of the film dealing with the rescue of Doi’s daughter Ran who has drawn inspiration from her stage performances to rebel against her cruel fate and father.

Ran is just another symptom of her father’s corruption in his obvious disregard for her feelings as he prepares to send her off as a concubine to buy himself influence with only the mild justification that her ascendence to the imperial court is an honour even if she will never be a wife, only one of many mistresses. Unlike Ran, Yuki and Shichi have managed to seize their own agency, living more or less independently and as freely as possible within the society they inhabit. Experiencing differing kinds of bad luck and betrayal, they find themselves at odds with each other yet on parallel paths despite their obvious dualities.

With less space for song, Hibari’s dual casting does at least offer twice the fight potential as the outlaw and the actress finally find themselves on the same side to tackle the persistent injustice of Edo era society as manifested in the corrupt Doi and his slimy cronies gearing up for the mass brawl finale in which the wronged take their revenge on the wicked lord by proving him a villain in the public square and earning themselves not a little social kudos in the process. All of which makes the strangely melancholy ending exiling one aspect of Hibari to the outer reaches somewhat uncomfortable but then it does provide an excuse for another song.