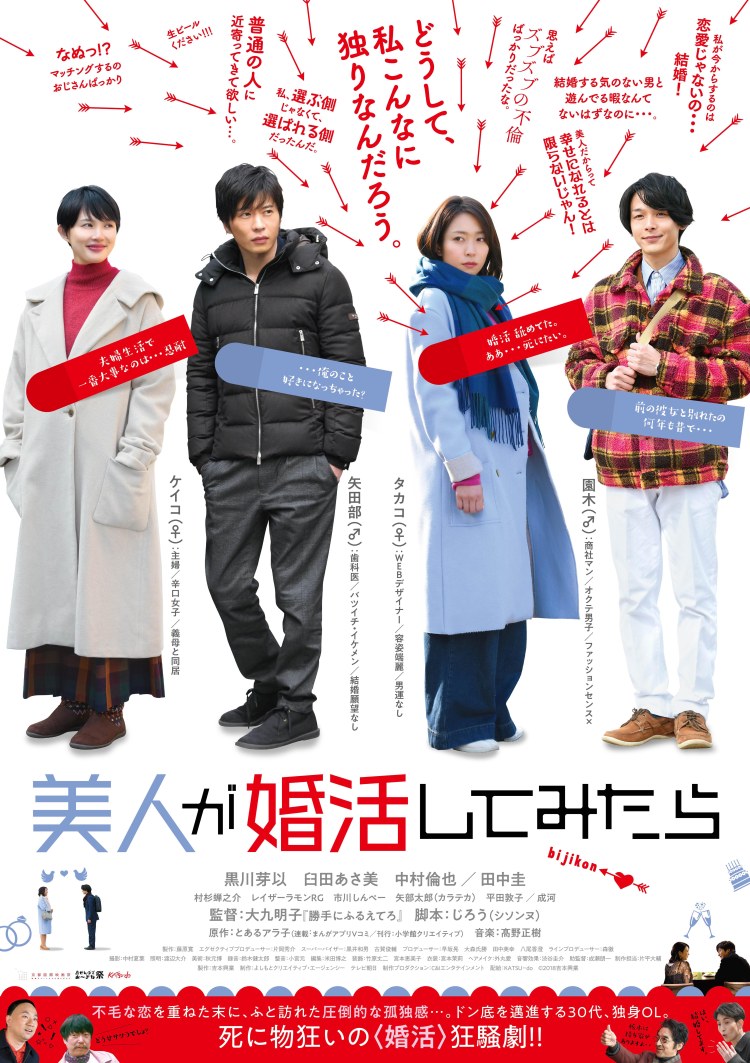 Is life really easier for “beautiful” people or do they simply experience a different series of problems? Some might say beauty is a nice problem to have, but however much people may scoff there is perhaps a price to be paid for physical attractiveness as the heroine of Akiko Ohku’s Marriage Hunting Beauty (美人が婚活してみたら, Bijin ga Konkatsu Shite Mitara) is at pains to point out though few are willing to sympathise. What she discovers, however, is that her beauty has perhaps been her blindspot in that it has made her self-centred and entitled while preventing her from realising what is it that has really been bothering her.

At 32, Takako (Mei Kurokawa) remains romantically naive and has wound up in a series of dead end relationships with terrible men who happened to be married (though she didn’t find out until it was too late). Her best friend, married housewife Keiko (Asami Usuda), tells her that her problem is that she’s too beautiful – single guys are too intimidated to make the first move while the married ones are emboldened by their desire to play with fire and the knowledge that the relationship is essentially meaningless because they already have “commitment” elsewhere. Hitting rock bottom, Takako suddenly has an epiphany that she wants to get married if only to prove that she is worthy of becoming someone’s wife rather just their mistress.

Takako is, it has to be said, perfectly aware that she is an attractive woman and sees little point in deflecting praise that comes her way because her of appearance – something that begins to grate on Keiko as Takako fails submit herself to the level of socially accepted modesty which would require her to protest when called “beautiful”. Keiko’s categorising her as a sad princess is perhaps accurate in that she certainly likes to paint herself as hard done by while refusing to engage with the aspects of her life which cause her to feel miserable and empty. Entering the world of “konkatsu” – accelerated dating with a view to marriage, is then a humbling experience in which she must simultaneously raise and lower her expectations in order to work towards an “ordinary”, conventional kind of settled domesticity.

Of course, “beautiful” people aren’t supposed to need such services, and so Takako’s first few matches on a dedicated marriage orientated website are predictably depressing – a parade of strange older gentlemen hoping to bag a beauty and usually selling their social capital (houses, steady jobs etc) to do so. The one guy she does kind of hit it off with, Sonogi (Tomoya Nakamura), is a shy salaryman who seems nice but lacks confidence and remains creepily in awe of her beauty. Meanwhile, a singles mixer at an “elite” bar introduces her to cynical dentist Yatabe (Kei Tanaka) who seems to have confidence in abundance but very little kindness.

Takako is back to the familiar problem of trying to choose between two men, one nice but servile and the other selfish and indifferent but admittedly exciting. Yatabe is a walking collection of red flags, which is to say that he’s just Takako’s type, but fortunately she’s beginning to figure out that what she likes is not always what’s good for her. Then again, she’s also trying to move past her conception of herself as a “beautiful” woman so Sonogi’s constant deference and gratitude for being allowed in the presence of someone so out of his league is exactly the opposite of what she’s looking for even if she’s beginning to warm to his nice guy charms.

Meanwhile, she remains uncomfortable with her own sense of desire and struggles to reconcile it with society’s preconceived notions of what “beautiful people” should be. Despite their otherwise close friendship, Takako is unable to talk honestly even with Keiko and largely fails to take much of an interest in her friend’s life. Keiko, meanwhile, seems to be trapped in an unfulfilling marriage and secretly may not want Takako to change because she is vicariously enjoying her messy bachelorette lifestyle. Nevertheless, it’s friendship which eventually wins out as the two women agree to meet on more equal terms, sharing their essential selves honestly and without fear as they commit to supporting each other with mutual understanding.

“There are no shortcuts to love”, Takako finally acknowledges as she realises what wanted all along wasn’t superficial acceptance but recognition. What looked like haughtiness was really low self esteem. A quirky tale of a middle-aged woman finding the courage to step into herself, Marriage Hunting Beauty might be telling a familiar story but does so with genuine sympathy for its beautiful heroine as she finally finds the strength to reject the social straightjacket and reclaim her sense of self as a person worthy of respect rather than reverence or ridicule.

Marriage Hunting Beauty was screened as the opening night gala of the 2019 Nippon Connection Film Festival.