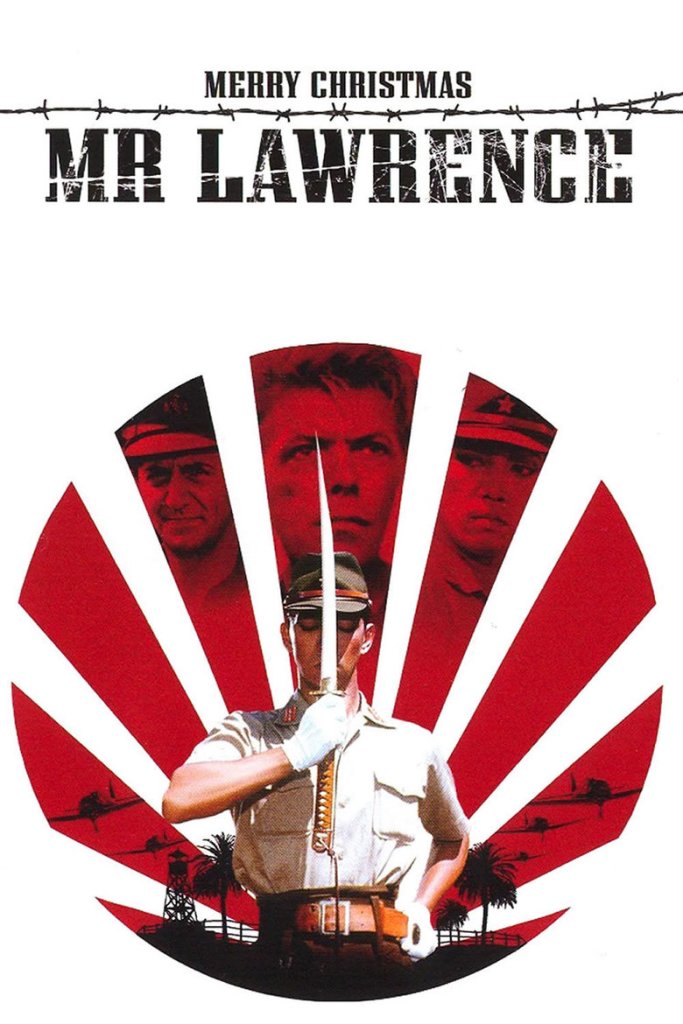 Of all the post-war Japanese filmmakers, the one who liked to twist the knife the most was surely Oshima. No subject too taboo, no pain too raw – he liked to find the sore spot and poke at it a little, if only in the hope of encouraging an accelerated healing, albeit one which would leave a scar to remind you that once you suffered. With Merry Christmas, Mr. Lawrence (戦場のメリークリスマス, Senjou no Merry Christmas) he takes an unflinching look at the treatment of Japan’s prisoners of war and contrasts the Japanese forces with the different attitudes of the (mostly) British soldiers held within the walls of the camp.

Based on a semi-autobiographical novel by Laurens Van der Post, The Seed and the Sower, much of the action takes place in a prisoner of war camp run by the Japanese in Java in 1942. The titular Lawrence (Tom Conti) is one of the British prisoners here but unusually speaks fluent Japanese as he lived in Japan for a time before the war. The camp is run by Captain Yonoi (played by Ryuichi Sakamoto who also composes the music for the film) but largely ministered over by the more sadistic Sergeant Hara (played by Takeshi Kitano in an early straight acting role and billed here solely as “Takeshi”). Things kick off once Yonoi is called away to help preside over a military trial for a “difficult” prisoner who refuses to talk. However, Yonoi is somewhat taken aback by the upright soldier he discovers there. Celliers (played by David Bowie) is sentenced to death only to have the firing squad deliberately miss before he’s transferred to Yonoi’s camp.

As expected the conditions at the camp are not particularly pleasant. The first scene we’re treated to is Lawrence being called to witness an altercation where a Korean/Japanese soldier is accused of raping a Dutch internee. Hara taunts both of them with homosexual slurs and berates the Dutchman for not having resisted strongly enough. Kanemoto, the accused man, has obviously been badly beaten and is eventually ordered to commit seppuku which he eventually tries to do at that very moment by impaling himself on a bayonet. Seppuku is not something to be taken so lightly though so he’ll be patched up now for a ritual suicide later to be witnessed by the wronged parties (whether they wish to watch or not). Homosexuality, or more precisely, homosexual acts, are not to be tolerated among prisoners even if Hara later protests that samurai are not afraid of “queers” whilst insinuating that the majority of Englishman are gay anyway.

Latent homosexuality continues to be an ongoing theme throughout the film. The attraction between Yonoi and Celliers passes beyond simple admiration or even fascination. There don’t seem to be any other particular reasons for Yonoi to continue trying to protect Celliers as he does when he saves him from the firing squad and later allowing him a greater degree of freedom than other prisoners. Both men feel themselves prisoners of their respective social systems – Yonoi as the cold hearted samurai, efficient and unfeeling, yet with an intellectual core and a conflicted heart, and Celliers as a man desperately trying to atone for having once betrayed someone he deeply cared for in a misguided attempt to fit in. That said, both men are on opposite sides of a war and in any case that kind attraction stands against both of their countries’ current social customs. Again, a man is betrayed by a kiss and another man pays an extraordinarily high price leaving the other powerless to save him.

As Lawrence says there are no winners here, wars are just men doing what they thought was right at the time even if they really know that every one of them is wrong. The Japanese are rigid, repressed and anxious whereas the British are obsessed with honour in other ways and lean more towards the side of pragmatism when the going gets tough. A Japanese soldier may prefer to die, even going so far as to commit suicide, rather than subject themselves to the humiliation of having been captured alive. A British soldier will accept becoming a prisoner but largely because he believes he has a duty to live on and serve to the best of his capacity. Once captured, his duty is to try and escape to return to fight and die for King and country until the bitter end.

What both sides have in common is the dehumanisation of its troops. When it comes down to it one man is as good as another. If a radio has been smuggled into the camp someone must be punished for that action, the exact identity of the perpetrator becomes almost an irrelevance. Likewise, if a war has been lost, someone must pay for wrongful acts committed by the losing side even if his actions are no worse than those of any other soldier.

Merry Christmas, Mr. Lawrence proves a beautifully sad condemnation both of the rigidity of war, of men who think they’re acting in righteousness when the very idea is the one which causes them to act unjustly, and of repressive social systems in general. Lawrence acts as the voice of reason whilst all the while admitting that he himself is also “wrong” and forced into certain actions and modes of behaviour with which he does not necessarily agree. Both of these empires are on the verge of crumbling, all this death and cruelty will prove to have been for nothing. War is a fruitless tragedy in which there are no winners, only losers on every side. “There are times when victory is very hard to take”, victors too need to abide by their own sense of decency without being swayed by vengeance masquerading as righteousness.

Merry Christmas, Mr Lawrence is available with English subtitles on blu-ray as part of The Criterion Collection in the US (and was previously released on blu-ray in the UK from Optimum/Studiocanal but appears to be currently out of print).

(That final voice over is needlessy creepy, isn’t it?)

Takeshi Kitano might still be best known for his ultra violent gangster pics, but after making it into the international arthouse repertoire with Sonatine back in the early ‘90s it was Hana-bi which put him on the map as one of Japan’s most prominent exports. Kitano plays the lead in the film once more adopting his cooler than cool persona with occasional flashes of violence only this time on the side of the law (to begin with, anyway).

Told in an initially confusing, flashback structure, Hana-bi follows middle aged policeman Nishi who experiences several life changing events in a short space of time. At the beginning of the film he’s let off a stakeout and told to go visit his wife who’s ill in hospital. Unfortunately, as we later find out, this will prove to be a poor decision as pretty much everything goes wrong – Nishi’s partner, Horibe, is shot and ends up paralysed, one of his other men is wounded and tragically another killed right in front of Nishi’s eyes. After being told that nothing more can be done for his wife and it’s better that she just come home from the hospital, Nishi quits the police force, gets involved with the yakuza and robs a bank before taking off with his wife for one last holiday.

Actually, the film skips over its climactic event until quite a way into its running time. Kitano unsettles us right away by giving us very little explanation for what we’re seeing. He shows us Nishi meeting with the widow of a man we didn’t even know was dead yet (not that he really told us who she was anyway). We’re left to piece events together like a detective listening to a confused witness testimony only our information is primarily visual – there isn’t even a lot of dialogue to guide us on our way. This refreshing technique is one the generally laconic Kitano seems to favour and greatly adds to Hana-bi’s low-key style.

Kitano never says too much in his movies anyway, but this time his is wife also near silent uttering the grand total of two words in the entire film and both of those come in the final scene. We know that she has a terminal illness (though it isn’t clear that she knows this, or how much she understands). Nishi and his wife also apparently lost their young daughter not long ago and it’s implied that perhaps she just hasn’t been fully present ever since. Her lack of speech, shyness and constant game playing coupled with her outwardly cheerful (if sometimes vacant) demeanour give her a childlike quality but the two words she does offer at the film’s conclusion imply (at least in that moment) that she knows what’s going on and understands what is about to happen.

Nishi and his wife have an extremely close relationship, they rarely need to speak to each other. However, Nishi’s partner, Horibe, discovers that his marriage was not as secure as he assumed as his wife and daughter walk out on him after his accident. In an effort to give him something to strive for, Nishi sends him some painting supplies and henceforth Horibe’s artwork (actually designed by Kitano himself) becomes a prominent motif in the film. The first series takes animals and then people and paints them with the heads of flowers but this then gives way to more complicated pointillist scenes. Many of Horibe’s works feature a repeated motif of a man, woman and child (neatly echoed in the films closing scenes) seemingly enjoying a happy family occasion. Perhaps this is an odd sort of masochism on Horibe’s part, lamenting everything he’s lost since his accident but the two figures could also represent the Nishis reunited with their lost daughter.

Shot in Kitano’s trademark blues, Hana-bi is a melancholy tale. Flowers and fire, Kitano shows us both extreme tenderness and fits of violence as he’s both the loving husband, grieving father, nurturing best friend and hardline cop who bears personal responsibility for the loss of his own. This path only leads in one direction and we’ve figured out where we’re headed long before nearing the end of our journey. Nevertheless, Hana-bi is a rich, poetic experience which continues to prove deeply moving and endlessly fascinating.

Hana-bi is re-released in the UK today on blu-ray courtesy of Third Window Films who will also be releasing Dolls and Kikujiro in the near future.