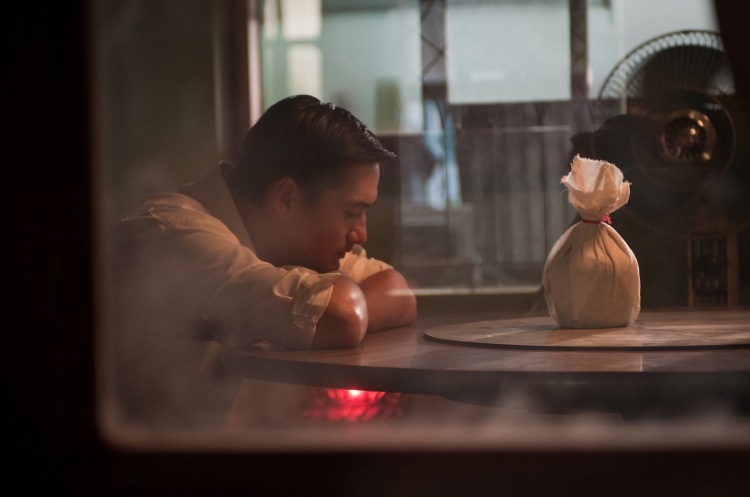 I reviewed this flawed yet interesting film, Concrete Clouds, for UK Anime Network. Probably I think I liked it a bit more than the score suggests but it does have its problems. Also ’90s (or maybe ’80s?) Thai pop is kind of amazing.

Up to now Lee Chatametikool has been best known as the regular editor on the films of Apichatpong Weerasethakul (Uncle Boonmee, Tropical Malady) but with Concrete Clouds he’s finally stepped out of the edit suite and behind the camera to direct his very first feature film. However, Concrete Clouds owes less to Apichatpong Weerasethakul or any of the other well known Thai directors he’s been working with over the last decade than it does to early period Tsai Ming-Liang and the Taiwanese new wave. A mood piece heavy on directorial flair but light on detail, Concrete Clouds never quite comes together but still manages to offer a few rewards for the patient viewer.

Set in 1997 just as the Asian Economic crisis begins to take hold, long time emigré Mutt (Ananda Everingham) gets a late night phone call from his high school age brother to say their father has just jumped off the roof. Mutt goes home for the first time in a long time aiming to lay a few ghosts – less that of his father than that of his teenage self and half forgotten love. Meanwhile, younger brother Nic has formed a tentative romance with a girl from the next building who appears to be living more or less alone and has just begun working in a hostess club. Just like his brother he’ll have to decide whether to abandon his love in Thailand to seek new dreams overseas or chase an ever elusive future in the land of his birth.

To be frank, the somewhat shocking and early death of the father retains little impact after the fact as neither of the now orphaned sons seems to dwell very long on the loss of their only parental figure and there’s no real soul searching over why he did what he did. The blueprints for new buildings he was looking at right before and the constant financial concern on the news screens seem to be evidence enough of his ultimate motives. Neither is much mention made of the absent mother who, one assumes, has been absent for a relatively long time. The age gap between the brothers also means that their relationship is not as close as you might assume brothers to be as Mutt must have left for America when Nic was little more than a toddler. Nevertheless, both boys are cast adrift by the older man’s decision, taken alone and with seemingly little concern for those around him.

The historical context is fairly key to the film though may be impenetrable for those less versed in recent history. In setting the story in 1997, the director intends both to imply that many of Thailand’s present social and economic problems stem back to the Asian Financial Crisis and the new Thai constitution which was created around that time but also to deal with the fragile nature of memory and our own tendencies to over romanticise our pasts by falling in love with a fantasy of our own creation. Mutt has dreamed of his high school girlfriend, Sai, ever since leaving her to go to college in America. He lives with a woman in New York but their relationship doesn’t seem particularly serious and she has not accompanied him to Thailand for his father’s funeral. Even though years have passed he’s remained faithful to the image of Sai he has in his mind and however much he tells himself nothing has changed it’s his own self created image that he’s wedded to, rather than the flesh and blood Sai who’s been busy getting on with her own life in the intervening ten years.

In a another cloud based film, Mikio Naruse’s Floating Clouds, the title refers to the the central characters who are unable to re-root themselves after the disruption caused to their lives firstly in failed Manchurian expedition and then by the after effects of the war. They float aimlessly trying to find something they can cling on to that will allow them to move forward with their lives and ultimately never find it. In Concrete Clouds it’s almost the opposite problem, the characters are weighed down by their dreams, almost crushed by them and unable to move. Their dreams will never lift off the ground because they can’t bear to let go of the past, of the people they once were and things they once thought they wanted.

The most notable element of Concrete Clouds is its unusual shooting style which incorporates everything from snatches of archival footage to long stretches of fantasy sequences played out as karaoke videos to late ‘90s Thai pop songs. The film has an interesting aesthetic which appropriately matches its melancholy and slightly wistful tone though it fails to capture the exact emotional ache that it seems to be going for. Ultimately its disparate elements never quite seem to coalesce into something more and though Concrete Clouds has plenty to admire it stops short of capturing the heart. Nevertheless it’s an impressive debut from Lee Chatametikool who has marked himself out as new talent to look out for in Thai cinema.

And here’s a clip of one of the karaoke sequences

And another from the OST

(I don’t know any Thai at all, what is this music?)

Review of this kind of cute French new wave influenced Japanese indie up at UK Anime Network. I kind of liked this one – it’s getting another screening at The Proud Archivist on Tuesday if you couldn’t make it today. Alternatively you can watch it online via FilmDoo!

It’s generally a mistake to judge a film by its title, but catching sight of  “Au revoir l’été” on the poster or DVD cover is going to tell you several things about the film you’re about to see. First of all it’s obviously in French – a bold choice for a Japanese film, set entirely in Japan, for release in English speaking territories. Loosely translated it means “Goodbye, Summer” and closely channels the film’s obvious inspiration point Eric Rohmer’s Conte d’été (A Summer’s Tale). If you’re thinking a bit French new wave, stories filled with youthful ennui and complicated romances – well, you’re not far wrong. Indie director Koji Fukada brings the new wave’s characteristic existential angst and romantic yearnings to the Japanese small, seaside town in this unexpectedly engaging odyssey into summer themed nostalgia.

Sakuko (Fumi Nikaido) is a slightly lost young girl who finds herself on an unexpected summer trip with her aunt to house sit for another of her aunts in a small, seaside town where she can get down to studying for a second go at her university entrance exams. Summers being what they are, she finds herself less studying than getting to know her aunts’ home town and their strange collection of childhood friends including old flame of one (or maybe all) of the sisters, former thug and current “hotel” manager Ukichi (Kanji Furutachi). Rounding out the band are Ukichi’s college age daughter Tatsuko and Fukushima refugee nephew Takashi (Taiga). Matters become even more complicated when another professor and sometime lover of Sakuko’s aunt Makie, Nishida, turns up to drip sleaze all over our lovely summer vacation. Like the “hotel” that Ukichi runs which turns out to be strictly a rent by the hour affair, Nishida may look presentable and spout a lot of fine talk but underneath he’s anything but genteel. Idyllic as summer holidays can be, there’s always a lesson to be learned somewhere even if you don’t quite see it at the time.

If you had to come up with a one word descriptor for Au revoir l’été, the one you’d go for would be “wistful”. It’s full of nostalgia for those long languid summers that you only experience at a certain time of life (or perhaps never even actually experienced other than in films and books) where days of listless possibility stretch out in front of you as if the summer really will go on forever. Until, of course, it ends abruptly and rudely just you started to feel it was getting started. Walks by the beach, coffee shops, birthday parties for new friends and a tentative romance with a wounded and clueless local boy – it’s the classic French new wave summer holiday.

Perhaps deliberately, it all has the feeling of a dream, as if its charms are born of the wilful ignoring of painful truths. The sun maybe shining (well, mostly), the river water’s warm and the birds are singing but – there’s always a looming shadow of something less pleasant lurking in the background. In a fairly ordinary way, it has to be said – not in a David Lynch sort of way, just in the sort of way you forget that mean thing your boss said to you last week because “you’re on holiday!” and you’ll think about it later. The “hotel” is a love hotel, the famous professor is a jealous womaniser and Takashi is a Fukushima refugee who’s almost glad about the disaster because it got him out of a bad family situation he has no desire to return to. You can have a really great time right now by not thinking about any of these things, but sooner or later you’ll have to leave the beautiful summer beaches for the muddy path back to reality. No one can live “on holiday” forever.

Nothing really happens, no grand life changing events but somehow things have progressed by the end and everyone seems to have reached a new clarity about themselves and their lives for better or worse. If the film has a major fault it’s that it loses more than it gains by casting the net a little wide and trying to deal with everybody’s stories all at once rather than focusing Sakuko’s viewpoint and radiating out from there. The heart of the film is with its younger protagonists, but it doesn’t  shy away from showing us what might become of them with the unhappy grown ups always in the background. Mikie and Ukichi, who’ve both had their share of disappointments in life, seem weighed down by regrets and compromises that even the summer air can’t ameliorate. The most clued up character is the almost cynical Tatsuko who seems immune’s to summer’s charms and is willing to see things as they are and exploit them to her own advantage.

Like many summers, Au revoir l’été is really far too long by the end but it’s so whimsically charming that you don’t quite mind. Another standout performance from Fumi Nikaido anchors the film through her fairly passive, though perceptively gifted, Sakuko and each of her summer companions is so engagingly drawn that there’s always plenty to think about. Which is just as well because this isn’t the sort of film to offer many answers so much as be content in observation. Charming, intriguing and at times beguiling Au revoir l’été may not set the world alight but it does bathe it in a warm summer glow.