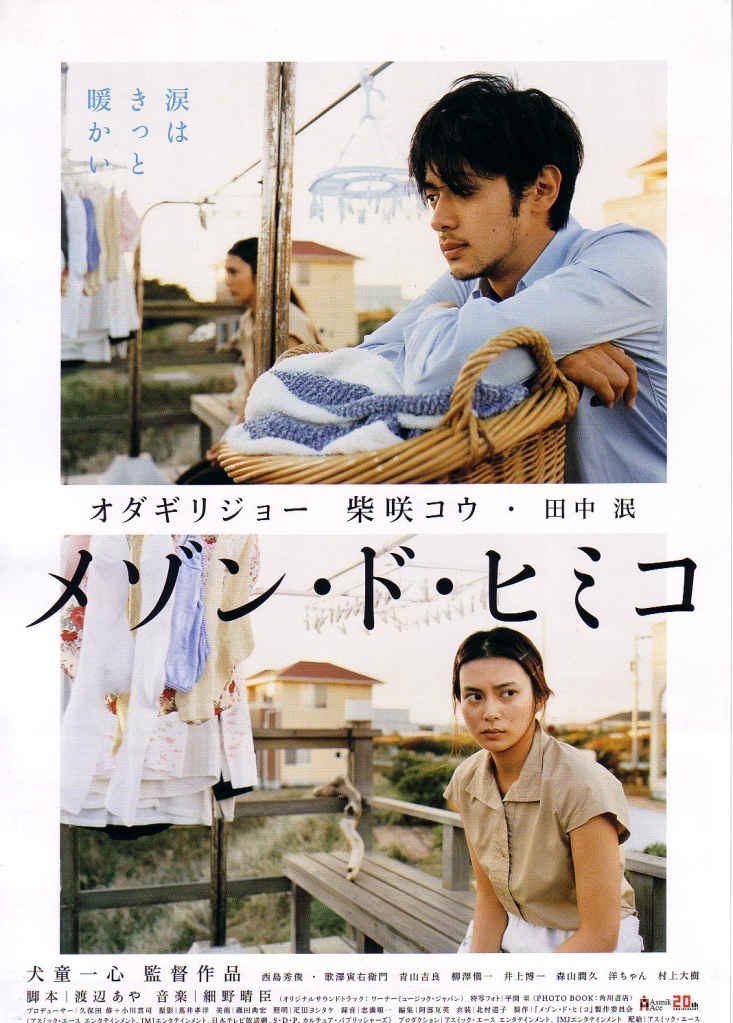 In Japan’s rapidly ageing society, there are many older people who find themselves left alone without the safety net traditionally provided by the extended family. This problem is compounded for those who’ve lived their lives outside of the mainstream which is so deeply rooted in the “traditional” familial system. La Maison de Himiko (メゾン・ド・ヒミコ) is the name of an old people’s home with a difference – it caters exclusively to older gay men who have often become estranged from their families because of their sexuality. The proprietoress, Himiko (Min Tanaka), formerly ran an upscale gay bar in Ginza before retiring to open the home but the future of the Maison is threatened now that Himiko has contracted a terminal illness and their long term patron seems set to withdraw his support.

Haruhiko (Joe Odagiri), Himiko’s much younger lover and the manager of the home, is determined to reunite his boss with his estranged daughter, Saori (Kou Shibasaki), before it’s too late. Saori is a rather sour faced and sullen woman carrying a decades long grudge against the father who abandoned her as a child and consigned her mother to a life of misery and heartbreak, so Haruhiko’s invitations are not warmly received. Haruhiko is not the giving up type and manages to sweet talk Saori’s colleague into revealing her desperate financial situation which has her already working two jobs with a part-time stint in a combini on top of her regular work during which she finds herself looking at lucrative ads for work on sex lines. When Haruhiko offers her a well paying gig helping out at the home, she has no choice but to put her pride aside.

The exclusively male residents of La Maison de Himiko lived their lives during a time when it was almost impossible to be openly gay. Consequently many of them have been married and had children but later left their families to live a more authentic life. Unfortunately, times being what they were, this often meant that they lost contact with their sons or daughters, even if they were able to keep in touch with their ex-wives or other family members for updates. For these reasons, La Maison de Himiko provides an invaluable refuge for older men who have nowhere else to go as they enter the later stages of their lives. The home provides not only a safe space where everybody is free to be themselves but also a sense of community and interdependence.

Though the situation is much improved, it is still imperfect as the home and its residents continue to face prejudice from the outside world. Saori, still carrying the pain of her father’s rejection, views his choice as a selfish one which placed his own desires above the duty he should have felt towards his wife and child. Partly driven by her resentment, Saori has a somewhat negative view of homosexuality on arriving at the home, offering up a selection of homophobic slurs, and is slow to warm to the residents. Gradually getting to know her father again and through her experiences at the home, her attitude slowly changes until she finds herself physically defending her new found friend when he’s set upon by a drunken former colleague who publicly shames him in a nightclub.

The home is also plagued by a gang of bratty kids who often leave homophobic graffiti scrawled across the front wall. One of their early tricks involves throwing a bunch of firecrackers under a parked car to stun Saori so they can hold her captive for a bit because they have really a lot of questions about lesbians and they wondered if she was one, though one wonders what they’d do if someone answered them seriously. Predictably, the leader of the bratty kids may be engaging in these kinds of behaviours because he’s confused himself. Thankfully La Maison de Himiko is an open and forgiving place, welcoming the boy inside to offer support to a young man still trying to figure himself out.

This is not a coming out story, but it is a plea for tolerance and acceptance through which Saori herself begins to blossom, easing her anger and resentment and sending her trademark scowl away with them. One of her closest friends at the home is a shy man who lived most of his life in the closet but makes the most beautiful embroidered clothes and elegant dresses. Sadly, the most lovely of them is reserved for his funeral – he’s too ashamed to wear it alive because he doesn’t like the way he looks in the mirror. Eventually he and Saori end up having an unconventional fancy dress party in which they both break out of their self imposed prisons culminating in a joyous group dance routine in a local nightclub.

Joe Odagiri turns in another nuanced, conflicted performance as the increasingly confused Haruhiko who finds himself oddly drawn to Saori’s sullen charms though the film thankfully avoids “turning” its male lead for an uncomfortable romantic conclusion. A young man among old ones, Haruhiko is somewhat out of place but has his own empty spaces. Revealing to Saori that he lives only for desire he betrays a nagging fear of his own emptiness and journey into a possibly lonely old age. Nevertheless, La Maison de Himiko is generally bright and cheerful despite some of the pain and sadness which also reside there. A warm and friendly tribute to the power of community, La Maison de Himiko is a hymn in praise of tolerance and inclusivity which, as it makes plain, bloom from the inside out.

And the fantastic dance sequence from the film

Just look at at that title for a second, would you? Crying Out Love, in the Center of the World, you’d be hard pressed to find a more poetically titled film even given Japan’s fairly abstract titling system. All the pain and rage and sorrow of youth seem to be penned up inside it waiting to burst forth. As you might expect, the film is part of the “Jun ai” or pure love genre and focusses on the doomed love story between an ordinary teenage boy and a dying girl. Their tragic romance may actually only occupy a few weeks, from early summer to late autumn, but its intensity casts a shadow across the rest of the boy’s life.

The story begins 17 years later, in 2004 when Sakutaro is a successful man living in the city and engaged to be married. Whilst preparing to move, his fiancée, Ritsuko, who happens to be from the same hometown, finds an old jacket of hers in a box which still has a long forgotten cassette tape hidden in the pocket. Dated 28th October 1986, the tape takes Ritsuko back to her childhood and a long forgotten, unfulfilled promise. She leaves a note for Sakutaro and heads home for a bit to think about her past while he, unknowingly, chases after her back to the place where he grew up and the memories of his lost love which he’s been unable to put to rest all these years…

In someways, Crying Out Love is your typical weepy as a young boy and girl find love only to have it cruelly snatched away from them by fate. Suddenly everything becomes so much more intense, time is running out and things which may have taken months or even years to work out have to happen in a matter of hours. In real terms, it’s just a summer when you’re 17 but then when you’re 17 everything is so much more intense anyway even when you don’t have to invite Death to the party too. Aki may have a point when suggesting that the the love the local photographer still carries for their recently deceased headmistress who married another man only lasted so long because it was unfulfilled. Perhaps Aki and Sakutaro’s love story would have been over by the end of high school in any case, but Sakutaro was never given the chance to find out and that unfinished business has continued to hover over him ever since, buzzing away in the back of his mind.

“Unfinished business” is really what the film’s about. Even so far as “pure love” goes, there comes a time where you need to move on. Perhaps the photographer might have been happier letting go of his youthful love and making a life with someone else, although, perhaps that isn’t exactly fair on the “someone else” involved. The photographer’s advice, as one who’s lived in the world a while and knows loneliness only too well, is that the only thing those who’ve been left behind can do is to tie up loose ends. Sakutaro needs to come to terms with Aki’s death so he can finally get on with the rest of his life.

There is a fair amount of melodrama which is only to be expected but largely Crying out Love skilfully avoids the maudlin and manages to stay on the right side of sickly. The performances are excellent across the board with a masterfully subtle performance from Takao Osawa as the older Sakutaro equally matched by the boyishness of a young Mirai Moriyama as his teenage counterpart. The standout performance however comes from Masami Nagasawa who plays the seemingly perfect Aki admired by all for her well rounded qualities from her sporting ability to her beauty and intelligence but also has a mischievous, playful side which brings her into contact with Sakutaro. Her decline in illness is beautifully played as she tries to put a brave face on her situation, determined not to give in and clinging to her romance with Sakutaro even though she knows that she will likely not survive. Kou Shibasaki completes the quartet of major players in a slightly smaller though hugely important role of Sakutaro’s modern day fiancée saddled with a difficult late stage monologue which she carries off with a great deal of skill.

The Japanese R2 DVD release of Crying Out Love, In the Center of the World includes English subtitles (Hurray!).