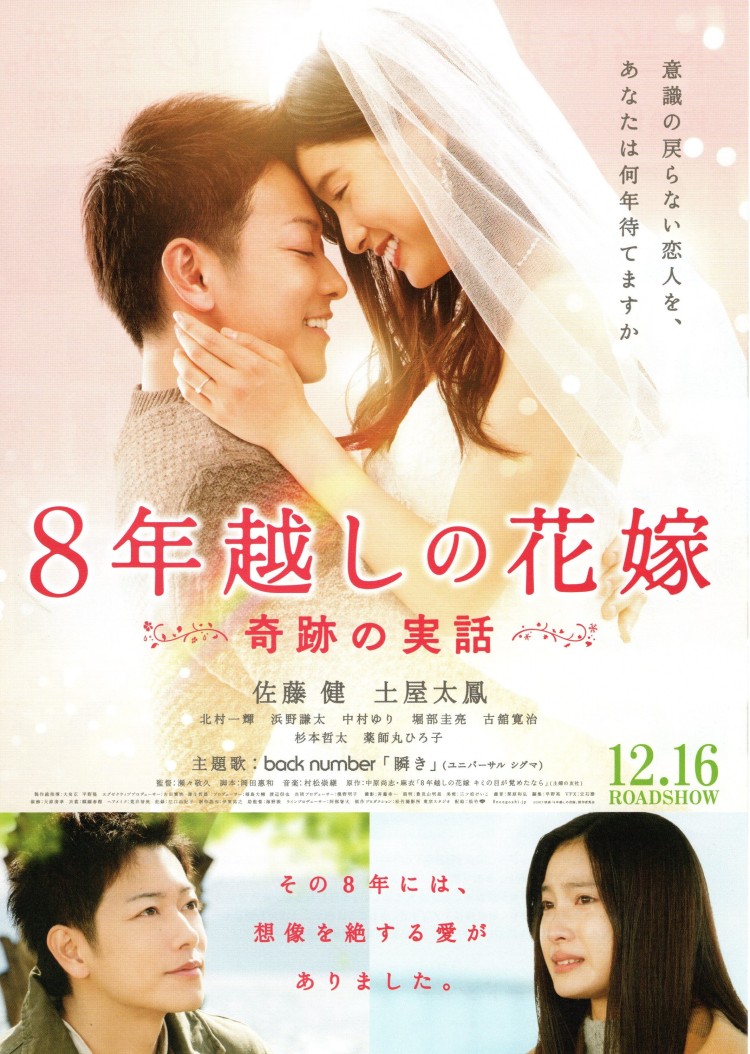 Romantic melodrama has long been a staple of Japanese cinema which seems to revel in stories of impossible love. The short lived boom in “jun-ai” or “pure love” romances which blossomed at the beginning of the century may have petered out gracefully after plundering every terminal or debilitating illness for traces of heartbreaking tragedy, but the genre has never quite gone away and is unlikely ever to do so. Takahisa Zeze’s The 8-Year Engagement (8年越しの花嫁 奇跡の実話, 8-nengoshi no Hanayome: Kiseki no Jitsuwa) is, however, a slightly different case in that it is inspired by a true story which became something of a hot topic in the relatively recent past. Romantic in a grand, old fashioned sense, the film shifts away from the melodrama of misery while praising the power of perseverance and the enduring potency of true love in bringing about unexpected miracles.

In 2006, shy and retiring car mechanic Hisashi (Takeru Satoh) tries and fails to get out of a party his chatty colleague is arranging for that very evening. Sullen and resentful at having been roped into a social occasion he was not mentally prepared for, Hisashi says barely anything and then manages to free himself when the others decide to go for karaoke. Just as he’s walking off mildly regretful, one of the other partygoers, Mai (Tao Tsuchiya), comes back to harangue him about his “attitude”. Hisashi explains that he’s sorry but he’s not very good at this sort of thing anyway and the truth is he wanted to go home because he’s got a killer stomach ache which being forced to eat fatty meat and down sake out of politeness has done nothing to help. Mai approves of this excuse, and even loops back after leaving to meet the others at the karaoke to hand him a heat pack she had in her bag in the hope that it might help with the stomach trouble. The pair start dating, become wildly happy, and get engaged. Three months before the wedding, Mai is struck down by a rare illness and winds up in a coma.

The romance itself is tucked up neatly into the first half hour or so and mostly conforms to genre norms – he is shy and extremely sensitive, she is extroverted and extremely kind. The love story proceeds smoothly, though there are signs of trouble to come in Mai’s increasing clumsiness followed by headaches which lead to memory loss and finally a painful hallucinogenic episode resulting in prolonged hospitalisation. Zeze wisely scales back on medical detail and focuses on Hisashi’s devotion and unwavering belief that Mai will one day open her eyes and return to him. Rather than cancel the wedding date, Hisashi decides to keep it open in the hope that Mai will be well enough to attend before booking the same date, the date of their first meeting, in every subsequent year just in case she should wake up and regret missing out on her dream wedding.

As the condition is so rare, no one is sure what the prognosis will be though the doctors admit there is a strong possibility Mai may never awaken or that if she does there may well be extensive brain damage and irreparable memory loss in addition to life long medical needs. Hisashi puts his life on hold and comes to the hospital every day, making short video messages he sends to Mai’s phone so she can catch up on what she’s missed when she wakes up. His devotion does however begin to worry Mai’s doting parents (Hiroko Yakushimaru & Tetta Sugimoto) who eventually decide to explain to him that as he’s “not family” there’s no need for him to feel obliged to stick around. They do this not because they’re territorial over their daughter’s care, or that they don’t like Hisashi, they simply worry that he’s going to waste his life waiting for a woman who will never wake up. As he’s still young and has a chance to start again, they try to push him away in the harshest way possible – through cool politeness, but are secretly pleased when he refuses to be pushed.

People making other people’s decisions for them as a means of reducing their suffering becomes a recurrent theme. Rather than say what they mean, kindhearted people say the things which they believe are for the best and will end someone else’s suffering through a moment of intense pain. Everyone is so keen to spare everyone else’s feelings, that they perhaps suffer themselves when there is no need to. Hisashi’s supportive boss remembers a rather odd comment he made during his interview – after replying that he enjoyed fixing things when asked what made him apply for the job, Hisashi’s boss asked him what he thought about while he did it to which he replied “love”. Love does it seems fix everything, at least when coupled with undying devotion and a refusal give up even when things look grim. A romantic melodrama with a positive ending The 8-year Engagement is a happy tearjerker in which love really does conquer all despite seemingly unsurmountable odds.