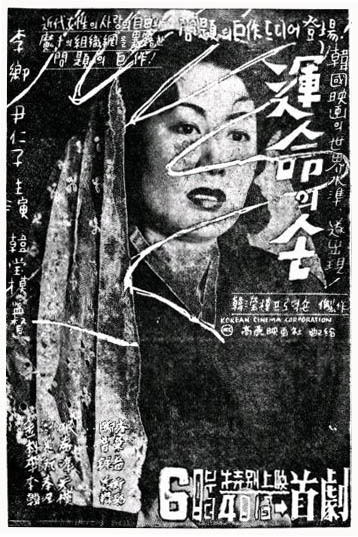 The kinds of directors who tend to garner retrospectives and reappraisals are perhaps those who lean closer to our own ideological biases. Even in the tightening censorship of the 1960s, Korean directors like Kim Soo-yong and Lee Man-hee were able to subtly undercut the prevailing conservatism of their times. Director Han Hyung-mo, by contrast, was a committed rightist whose films express a distinct intolerance towards liberalism, women’s rights, and the Communist North. Han, like many directors of his generation, studied filmmaking in Japan near the end of the Colonial era and began his career as a cinematographer. His first film, Breaking the Wall released in 1949, is sometimes described as the first Korean anti-communist film. Returning to narrative filmmaking after serving as a documentarian during the Korean War, Han’s Hand of Fate (運命의 손 / 운명의 손, Unmyeong-ui Son, AKA Hand of Destiny) released in 1954 is not perhaps as rabidly anti-communist as might be expected but makes clear that there can be no redemption for an ideologically compromised woman.

Jung-ae (Yu In-ja), a North Korean spy posing as a bar girl in the South, enjoys a life of comparative freedom and luxury but remains committed to her mission. When the police bring a wounded student, Yong-chul (Lee Hyang), to her door one day as a possible suspect in a robbery she’d previously reported to them, she takes pity on the man and tells the police to let him go. She brings him into her apartment, treats his wounds, and feeds him. For some reason she develops an attraction for the melancholy student and so when she spots Yong-chul working on a construction site, Jung-ae takes him out on the town, buys him a new suit and shoes, and eventually begins a relationship with him. Professional habits die hard, however, and so when she rifles through his wallet she is disturbed to find his military intelligence ID card and discover he is really a spy catcher.

Released in 1954, Hand of Fate is a product of the immediate post-war era and is in fact one of the very few surviving films from that year. Nevertheless, it takes its cues very much from international cinema and particularly from American and European noir and spy films in its fatalistic trajectories and uncharacteristically murky worldview. Though Han includes mild anti-communist sentiment in Jung-ae’s eventual disillusionment with the “Communist Party’s hackneyed methods”, the fact that she is a spy for the North is almost incidental for much of the film, the conflict being not that she is a Communist and therefore evil but on a much simpler level that she is required to straddle a difficult ideological divide. Of course, the force that shakes her loyalty is love and in this Han reaffirms her womanliness in simultaneously making emotion both her weakness and the best weapon against the rigidity of Communism. Then again, rightists aren’t so keen on emotion either and so romance must fail.

Both Jung-ae and Yong-chul come to the conclusion that their only mistake was falling in love – not so much with an “enemy” but across an impossible border presented by the 38th Parallel. The futility of the love is laid firmly at the feet of a destructive division imposed by outside powers which painfully separates two parts of one whole. “We love each other, why can’t we be together?” Yong-chul asks, still unaware that Jung-ae is the female spy he’s been looking for. “You’re so close to me now”, Jung-ae adds later, “Why have we been so far apart?”, lamenting that the wall which has kept them at a distance from one another has been largely illusionary and has now been destroyed if only in terms of personal ideology. Rather than the demonisation of the North which would define the anti-communist film, it is the pain of the division which is the real enemy though in contrast to other similarly themed films, Han suggests a clean break might be the best solution rather than holding out hope for reunification.

Meanwhile, the pair work at cross purposes in misattributing the suffering of the other to culturally defined, gender-specific stigmas. Yong-chul assumes Jung-ae’s misery is down to being a “fallen woman”, that as a sex worker she worries she has lost the right to love him (he is keen to assure her that she hasn’t and there’s nothing wrong her life choices – a liberality that stands in contrast to the film’s subtle condemnation of Jung-ae on just this fact as a woman who uses her body as a tool of war), when really she is caught in an impossible position in having fallen in love with a man she will probably have to kill. Before discovering his real occupation, Jung-ae assumed Yong-chul’s misery was down to his poverty. She feels the manual job he takes to support himself through college is beneath him, indulging in a stigma towards blue collar workers which seems odd for a committed communist, and wants to “save” him by restoring him to his rightful social class with her money which she earned in a way she fears he may think immoral.

Despite Han’s fierce conservatism, Hand of Fate features the first on screen kiss in Korean cinema history but where it is undoubtedly romantic, it is also dark and fatalist. In keeping with the title and the noirish atmosphere, the narrative trajectory leads only to tragedy in which the division will be maintained with the South in the ascendent. Jung-ae’s ideological fracturing leaves her with nowhere to turn, while Han’s overly conservative viewpoint will not allow her to find peace or resolution not only because of her Communist roots but because of being an “immoral” and “vulgar” woman as she describes herself early on. Described as “An epoch-marking, ambitious work in the history of Korean Cinema”, Hand of Fate is indeed a bold experiment, opening with a tense, dialogue free sequence of spy craft and danger even if it later overdoes the expressionism with climactic thunderstorms and overly literal bombs (not to mention the constant hand imagery), offering a dark and noirish vision of a divided future in which the pain and suffering caused by the division will continue with the only “hope” that the wall will eventually become a fading scar.