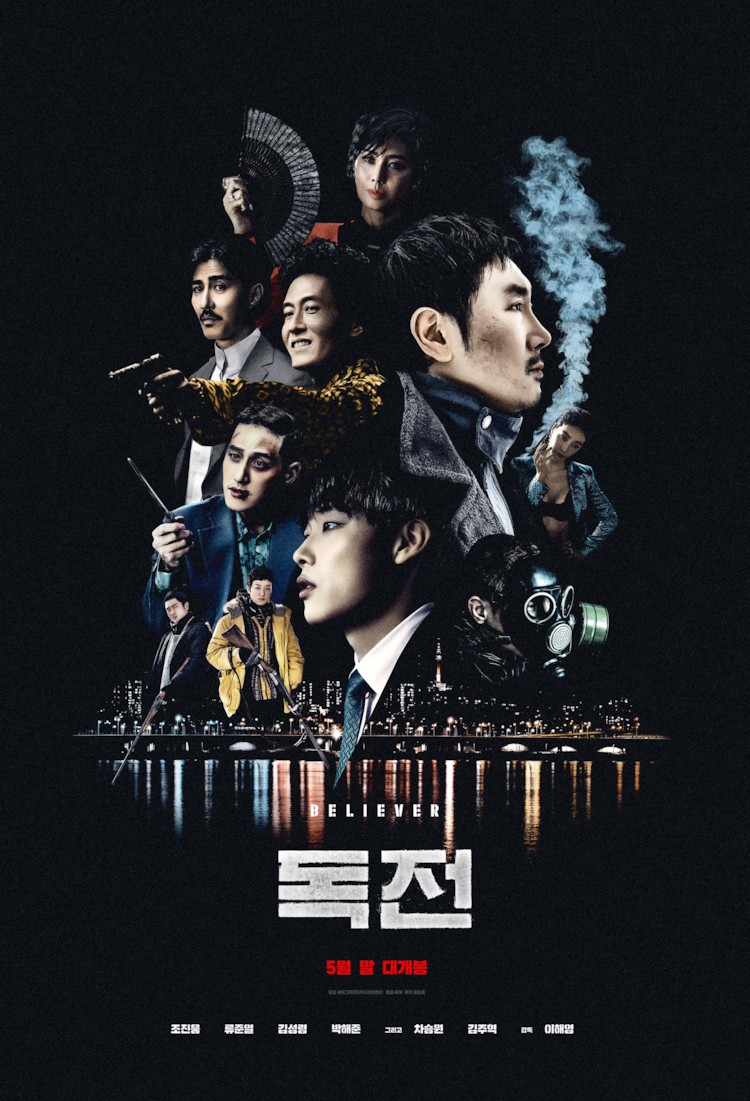 Johnnie To’s darkly comical tale of a weaselly meth cook with an extremely strong survival instinct and the austere policeman who can’t resist taking his bait might seem perfectly primed for a Korean remake in its innate pessimism and awkward bromance. Lee Hae-young’s Believer (독전, Dokjeon), however, merely borrows the bones of To’s Drug War while doubling down on its central conceit as reckless obsession leads to the undoing of both our heroes, each forced to confront the futility of their respective, mutually dependent quests.

Obsessed with tracking down a mysterious drug lord known only as “Mr. Lee”, narcotics cop Won-ho (Cho Jin-woong) asks a favour from an old informant only to see her murdered, leaving him only a vague clue by tracing an infinity symbol on a crumpled receipt moments before passing away. Warned off the Mr. Lee case, Won-ho finally gets a lead when an explosion at a drug lab brings scorned righthand woman Oh (Kim Sung-ryung) into his office promising to spill the beans in return for protection and immunity. Sadly, Won-ho couldn’t protect her either, but there was another unexpected survivor in the form of low level middleman Rak (Ryu Jun-yeol).

Traumatised by the death of his mother in the same explosion, Rak initially says nothing under interrogation but suddenly wakes up on learning that the lab’s dog also survived and has been rescued by the police. Unlike the “hero” of To’s film, Rak is small fry (if well connected) and is not looking at anything more than significant prison time. Rak may not be fighting for his life but he has a number of reasons for switching sides, especially once Won-ho fills him in on Mr. Lee’s backstory and long history of abrupt purges.

Despite working for the organisation, neither Oh nor Rak had ever met “Mr. Lee”. No one knows anything about them – gender, nationality, name, or location. In fact, there may not even be a Mr. Lee. Perhaps “Mr. Lee” is merely the “god” of drug dealers – an abstract idea almost given flesh but existing in a spiritual sense alone. Nevertheless, the idea of a Mr. Lee has completely captured the heart of compassionate police detective Won-ho whose all encompassing need to find him has already severely destabilised his life. After failing to protect his informant, Won-ho’s complaint against Mr. Lee is now a personal as well as professional one. Not so much out of vengeance (though there is that too), but a need to make the deaths count and his mounting losses meaningful.

Yet as another Mr. Lee contender later puts it, salvation may not be a matter of faith and if your faith has been misplaced, death may be a healing. In believing so deeply in the idea of “Mr. Lee”, Won-ho has given him form and created an idol to be worshipped through devotion. “Brian” (Cha Seung-won), a higher ranking gangster and former preacher chased out of the US for getting his congregation hooked on cocaine, has his own particular brand of faith based problems but subscribes to much the same philosophy. He may really be Mr. Lee (as may anyone), but if he isn’t he’s determined to convince himself he is in order to see himself as something more than the failed son of a chaebol dad who couldn’t hack it in the family business or in the pulpit. Brian would be happy to die as Mr. Lee rather than going on living as “himself”. Won-ho, unable to understand why kids do drugs asks his informant who explains it’s mostly because life is rubbish. Later someone says something similar to Brian, that he’d rather delude himself with the belief that he’s “someone” rather than face the emptiness.

Despite himself, and as Rak is eager to remind him, Won-ho is dependent on his informant for the pursuit of his case. Won-ho is reluctant to trust him even though Rak seems to be actively working to protect him in this extremely dangerous and largely unfamiliar world. Rak, by contrast, is aware he hasn’t won Won-ho’s faith, but assures him that’s OK because Rak trusts him. Rak does indeed seem to have the upper hand along with mysterious motivations and a fishy backstory, but Won-ho’s desperation to get close to Mr. Lee leaves him wide-open, unwilling to trust his guide but too invested to consider cutting him loose. “Belief” becomes its own drug, a transformative ritual act which gradually erodes all other needs and leaves only emptiness in their place. Won-ho can’t even remember why he started chasing Mr. Lee, but all that remains of him is the chase – a true believer suddenly bereft of a cause. Lee Hae-young takes To’s nihilistic cynicism and subverts it with a focus on the personal as both men fight self created images of their individual demons but find themselves unable to escape from their mutually assured identities.

Believer was screened as part of the 2018 BFI London Film Festival. 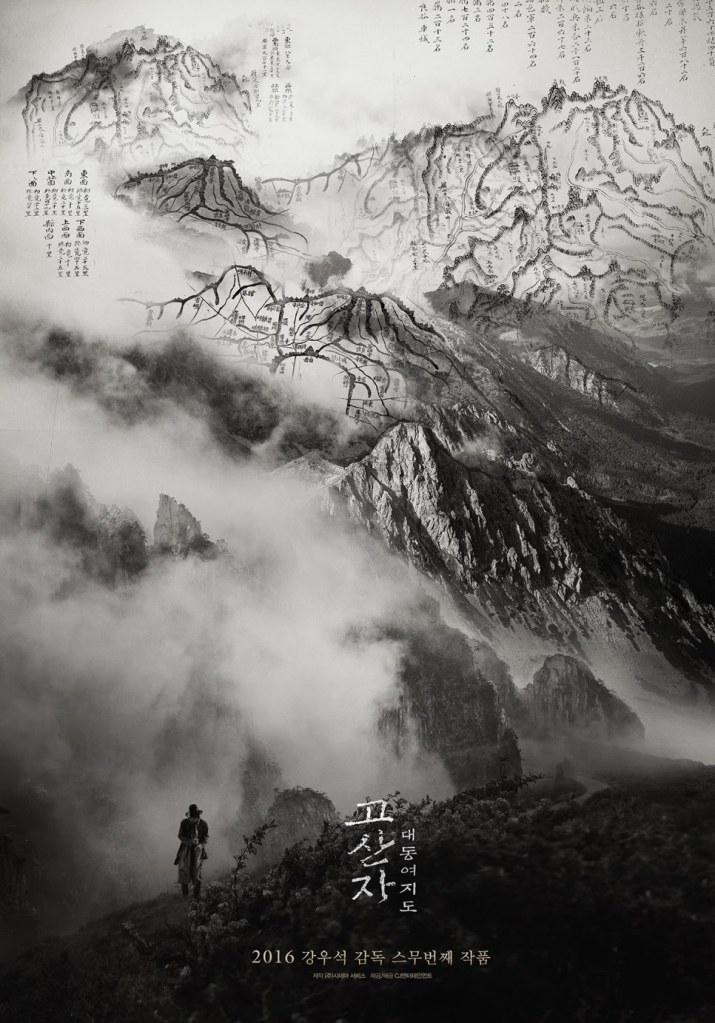 The map is not the territory – as the old adage goes. There’s always a difference between the thing itself and the perception of it but, as the “hero” of The Map Against the World (고산자, 대동여지도, Gosanja, Daedongyeojido) points out, if you’re about to set off on a long journey it’s a good idea to not to rely on a linear map else you’ll run out of good shoes long before you reach your destination. Kim Jeong-ho (Cha Seung-Won) was, apparently, a real person (though little is known about him) who set out to make a proper map of the Korean peninsula after a cartographic error led to the death of his father and many other men from his village when they ran out of resources crossing what they thought was one mountain but turned out to be one mountain range.

The difficulty here is that The Map Around the World pivots around a man who is so crazed and obsessive in his quest that he causes serious problems not only for himself in a difficult political climate, but also for those close to him whose lives he ruins through neglect and abandonment. Is he a hero for following his dreams even though they cost others so dearly? The film seems to say yes, but it’s a difficult message to swallow.

Ever since Kim Jeong-ho’s father died, he’s been obsessed with the idea of creating an accurate map of the Korean peninsula from end to end including the “Dokdo” (or which ever name you wish to use) islands. Consequently, he spends much of his life wandering around on his own which has made him a bit strange. Returning home after a four year absence, Jeong-ho does not seem to be aware that time has been passing even in Seoul and his little daughter, Soon-sil (Nam Ji-hyun), is now all grown up. Jeong-ho also has a kind of relationship with his neighbour, Mrs. Yeonju (Shin Dong-mi), who has been looking after Soon-sil but it’s all a bit awkward.

Aside from Jeong-ho’s terrible performance as a family man, the main intrigue centres around his big philosophy – open access to information for everyone from the nobleman to the peasant. In order to make sure maps remain as accurate as possible, he’s hit on the idea of producing woodblocks so they can be reproduced en masse with fewer errors and then sold to anyone who wants one so that people are free to travel wherever they wish. This is an extraordinarily destabilising idea in the increasingly paranoid world of the late Joseon era under the Regent Heungseon Daewongun (Yu Jun-sang). The woodblocks are dangerous because the elites do not wish the common man to possess that kind of knowledge, would rather people did not travel very much, and there is always the old “national security” fear in which the rulers assert the danger of spies and invaders getting their hands on such an accurate guide to the terrain.

Of course, Heungseon Daewongun ruling as a Regent for his young son means there is also a simmering battle for power running in the background as second tier nobles snap away at each other trying to increase their status in the hope of making a bid for the big chair. Heungseon Daewongun has reason enough to be paranoid but his rule is an austere one in which all foreign elements are to be eliminated in their entirety.

Kim Jeong-ho’s world is difficult and often frightening but Jeong-ho cares for nothing but maps aside from the idea of the free exchange of information. The early part of the film is, broadly, a quirky comedy about an amiable eccentric laughing his way out of trouble whilst evading debt collectors and trying to earn the forgiveness of the women he’s abandoned with nary a word for the last four years.

Jokes about Jeong-ho’s awkward relationship with his neighbour, mild irritation with the idea that his now grown up daughter has a boyfriend, and buddy comedy with the guy helping him carve the woodblocks suddenly seem out of place when the film descends into a morass of cruelty and horror with no apparent warning. Jeong-ho himself is beaten by authorities determined to obtain his maps by underhanded means seeing as Jeong-ho wants them to be available to the people and therefore refuses to surrender them into the “care” of the state. When that doesn’t work, he places himself in line for more harassment, but that’s nothing compared to what happens when a secret sect of Christians (banned for fear of foreignness) is uncovered in the village. Brutally tortured and instructed to denounce others, the villagers are then publicly beheaded. Suddenly, maps don’t seem so important any more.

Nevertheless, Jeong-ho quickly gets over the stubbornness that has cost him the things he held most dear (aside, it seems, from maps) to get right back out there and do some hardcore cartography. The film ends on an oddly upbeat note as Jeong-ho ventures forth on another adventure, edging ever closer to completing his mission, but even if he is about to make his “dream” come true, that same dream has just got a number of people killed. Jeong-ho’s quest to make the maps available to all could be seen as resistance to the oppressiveness of the state, but it isn’t, he just really likes maps and thinks you should too. The Gangchi (otherwise known as “Japanese” sealions, apparently hunted into extinction by Japanese fishermen in the 1970s) frolic happily off the waters of Dokdo as Jeong-ho approaches, but it hardly seems like a cause for celebration.

Over long and tonally inconsistent, The Map Against the World is a frustrating and often dull experience. Hold the map against the world and see what you see, errors and imperfections everywhere. Yet fighting oppression through cartography is a difficult task, and when it comes down to it a map against the world is not enough on its own. Filled with picturesque shots of Korea’s natural beauty, The Map Against the World displays generally high production values but can’t decide if it’s the story of a valiant revolutionary waging a cultural war for freedom of information in the middle of a paranoid dictatorship, or just a film about a madman trying to map ever changing terrain. Jeong-ho’s quest may be a noble one, but his single minded determination and willingness to sacrifice other people’s lives in its service is far from heroic leaving the film’s bittersweet finale feeling very hollow indeed.