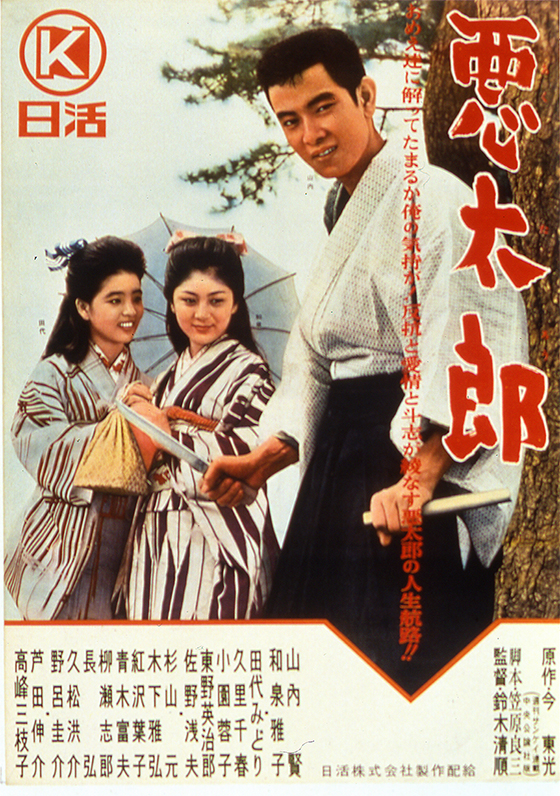 Seijun Suzuki often credits 1963’s Youth of the Beast as the real turning point in his directorial career, believing that it marked the first time he was ever really able to indulge his taste for the surreal to the extent that he truly wanted. The Incorrigible (悪太郎, Akutato, AKA Bastard), completed directly after Youth of the Beast, is another turning point of a kind in that it marks Suzuki’s first collaboration with set designer Takeo Kimura who would accompany him through his ‘60s masterpieces contributing to the uniquely theatrical aesthetic which came to be the director’s trademark.

Inspired by an autobiographical novel by Toko Kon, The Incorrigible of the title, Togo Konno (Ken Yamauchi), is a young man coming of age in the early Taisho era. He’s of noble birth and enjoys both wealth and privilege – something of which he is well aware, but is also of a rebellious, individualist character believing himself above the normal rules of civil society. Expelled from his posh Kyoto school after getting into a dalliance with a teacher’s daughter (she’s been sent off to a convent), Konno is then abruptly abandoned by his mother who has tricked him into travelling to a remote rural town where a friend of a family friend has promised to reform him at his military middle school. Konno thinks he’s too clever for this, he makes a point of deliberately failing his entrance exam in the mistaken belief that failing to get in would make him free to travel to Tokyo and start life on his own. He’s wrong, and failure to pass the exam would only entail being held back a year. Konno capitulates and agrees to start his new life as one among many in a backward little village in Southern Japan.

Though set in the Taisho era, Konno’s youth seems to suffer from the same problems that would plague the young men of 30 years later. His school is proto-militarist and hot on discipline. The boys are trained to be strong rather than smart and have inherited all the petty prejudices of their parents which they hone to the point of weaponry. The “Public Morals” department operates almost like a mini military police for students – making routine inspections of students’ home lives and keeping an eye out for “illicit” activities round and about town. Konno sees himself as grown man with a rebellious heart – he smokes openly, keeps a picture of the girl who got him into this mess in his room, and tells bawdy, probably made up stories about how he lost his virginity to a geisha (for free). He will not bow to the morality police, or any authority but his own.

Authority is something Konno seems to be good at. Picked on for his continuing preference for Japanese dress, Konno neatly deflects the attentions of the Public Morals division and comes out on top. When they raid his room and complain about his novel reading habit, he shouts them all down and gets them to sit on the floor while he “educates” them about foreign literature. Militarism has not yet arrived, but anti-intellectualism is already on the up and up. Konno’s love of literature is one of his many “deficient” qualities as teachers and students alike bemoan his “frivolous” hobbies, seeing his sensitivity and disregard for the commonly accepted ideals as signs of his unwelcome “unmanliness”.

Konno’s other big problem is, as might be expected, girls. Having been in town only moments Konno takes a fancy to doctor’s daughter Emiko (Masako Izumi) – his desire is only further inflamed after catching sight of her in the book shop and realising she too has bought a copy of Strindberg’s Red Room. She doesn’t care for Strindberg’s misanthropy, but a bond is quickly forged between the two sensitive souls trapped in this “traditional” small town where feelings are forbidden and youth constrained by social stricture.

It is, however, a love doomed to fail. The majority of Suzuki’s early work for Nikkatsu had been contemporary youth dramas, yet the artfully composed black and white photography of the Taisho setting is a melancholic affair which rejects both the rage of the modern action dramas and Suzuki’s trademark detached irony. Using frequent dissolves, The Incorrigible conjures a strong air of nostalgia and regret, a sad love story without end. Yet at its conclusion it makes sure to inject a note of uplifting inspiration as our hero wanders off into a fog of confusion, filled with a passion for pursuing truth and vowing to live without losing hope. 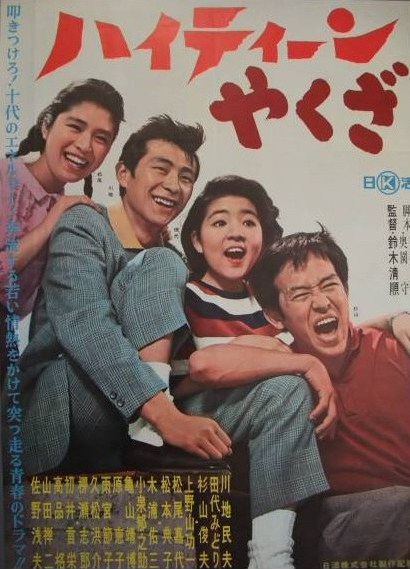 Nikkatsu’s stock in youthful angst could have a nasty edge, even in their early days, but even so the Japanese teen movie is often a charming affair in which plucky youngsters defy the perils of their time from a position of relative safety. Rebellious punks die in Nikkatsu Action, but in the poppier coming of age world, innocence wins out as the angry young man finds a way to repurpose his rage for the good of society. Though Seijun Suzuki is generally associated with his “incomprehensible” work for the studio which eventually fired him in 1968, his trademark sense of absurd irony is a perfect fit for the essentially innocent world of the small town teen in ‘60s Japan.

High schooler Jiro (Tamio Kawaji) lives in a fatherless family with a grown-up older sister (Noriko Matsumoto) thinking about marriage and a mother (Kotoe Hatsui) about to open a trendy coffee shop/jazz parlour. He’s best friends with Yoshio (Hajime Sugiyama) – son of the carpenter working on the cafe, and is a typical scatterbrained teenage boy who enjoys fighting and has a “part-time job” taking illicit bets at the bicycle races. His problems start when he wins big on a bet but is hassled by a couple of punks dressed up like cowboys who deprive him of his winnings. Getting revenge, Jiro and Yoshio end up in a fight with the local gangsters in which Yoshio is stabbed in the leg and crippled for life and to make matters worse, his dad is killed in a traffic accident rushing to the scene of the crime. Filled with remorse, Yoshio turns to the dark side and falls out with Jiro while the petty punks start upping the ante and terrorising the town. The daughter of a local restaurant owner, Kazuko (Midori Tashiro), pulls Jiro in to frighten the punks off and convinces her dad to pay him for his time. Soon enough the other store owners are doing the same and Jiro is earning a pretty penny but what he thinks of as public service the store owners are beginning to think of as extortion – Jiro has become the yakuza he feared.

Like many a Nikkatsu hero, Jiro is a good kid misunderstood. He thought he was the lone voice standing up to the yakuza, the only sheriff in town and a shining beacon of justice. He didn’t see danger in taking the money because he genuinely thought it was a gift given freely out of gratitude, and perhaps to begin with it was. Danger rears its head when his sister’s fiancé suggests that Jiro’s illicit bodyguard business might cause problems for him at work and thereby endanger their marriage. When his mum talks sense into him, Jiro decides to try stopping the payments but it’s already too late. Thinking Jiro is after more money the store owners are scared, assuming Jiro will either remove his protection or turn on them as the yakuza they now believe him to be.

This sudden reversal of his self perception deeply wounds Jiro. He believed he was acting in the best interests of everyone and now has to accept he was corrupted by greed and status. He was acting like a yakuza, if accidentally, and has to accept his complicity in his present predicament. Rather than lashing out in rage and becoming the thing he’s been branded, Jiro (eventually) swings the opposite way, commits to ridding the town of yakuza but accepts that delinquency is not his best weapon.

Teenage Yakuza (ハイティーンやくざ, High Teen Yakuza) is no lone wolf story – lone wolves die at the end of Nikkatsu pictures, but Jiro and his ilk need to live to restore the peacefully innocent atmosphere that was broken by the random cowboys at the beginning. Jiro realises that saving the town is not his responsibility – at least not his alone, and he cannot do it all by himself. If the town is to be saved, it has to be because everyone chose to save it – Jiro’s job is not to fight the “yakuza”, but to make everyone else understand that the “yakuza”’s power is illusionary. Leading by example, he gradually wins them over (even the petty delinquents his original exploits helped to corrupt), ousting the growing influence of the shady gangsters through simple resistance.

A shorter, more disposable effort, Teenage Yakuza perhaps allows Suzuki wider scope for experimentation or at least allows him to express his trademark irony in a more direct way than your average programmer would. Filled with the youthful energy of the frequently echoed pop song, the twisters in the jazz bars, and the soba noodle delinquent with her cheerful ukulele, this is less youth on fire than youth breezing through. Teenage Yakuza neatly subverts the ideology of Nikkatsu’s action line, refusing the bad end for the angry lone wolf and gleefully restoring order with a hippyish plea for the solidarity of goodness.