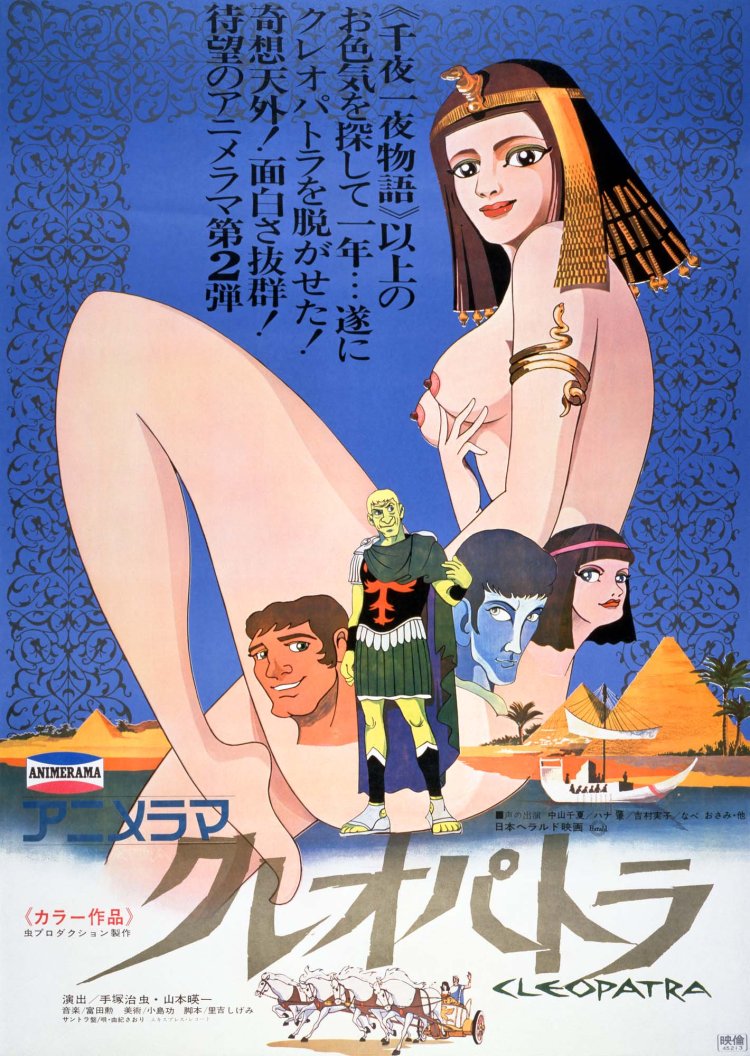 Mushi Pro’s first real foray into feature length (and feature length it really was at over two hours) animation for adults, A Thousand & One Nights, had earned some critical plaudits but nevertheless failed to set the box office alight. A year later they tried again as manga pioneer Osamu Tezuka and experimental animator Eiichi Yamamoto reteamed for a salacious tale of ancient Egypt. Or at least that’s what was promised by the suggestive title, Cleopatra (クレオパトラ), recalling Hollywood glamour and cinematic excess anchored by beauty to echo through the ages, but what emerges is less a tale of doomed love and imperial lust than a thinly veiled attack on the American “occupation” and associated foreign policy in an increasingly politicised age.

Because Tezuka likes to be perverse, he opens not with deserts and pyramids but with a silent ode to 2001: A Space Odyssey before a space ship drifts into view and sails into a very space age tower block filled with very ordinary corridors. Our team of space warriors are part of a colonising force hellbent on conquering nations which don’t which to be conquered. The Pasatorine have mounted a resistance and Earth intelligence has got wind of a covert operation codenamed “Cleopatra”. To figure out what the name might mean, they’ve decided to send three of their best agents back in time to hang out with the lady herself and gather a few clues.

Back in Ancient Egypt, the nation has been overrun by lecherous Roman troops who ride roughshod over the local population (which includes a number of well known characters from popular 1960s manga). Caesar (Hajime Hana) himself is a jolly green giant with skin like Osiris who turns out to be a little more sympathetic than might otherwise be assumed. Nevertheless, a resistance movement has spun into action guided by the royal nanny, Apollodoria (Kotoe Hatsui), who has convinced exiled princess Cleopatra (Chinatsu Nakayama) that their best hope for freedom lies in her body which she must use as a weapon against the lusty foreign general in order that she might seduce and betray.

Cleopatra, however, is conflicted. Molested by her old nanny and falling for her unexpectedly “decent” captor, she wavers in her conviction and begins to wonder if the best path for her people might lie in working alongside rather than against her nation’s new masters. As history tells us, she may not get to make that choice for herself for her stony general has a weakness his countrymen can exploit leaving her all at sea once again.

In 1970 Japan was about to revisit the post-war security treaty with the Americans giving rise to a wide scale protests against what many saw as Japanese complicity in controversial American foreign policy and particularly the ongoing war in Vietnam. The Romans, thinly veiled stand-ins for Americans in Japan, march in triumph, oppressing the locals and erasing traditional culture in favour of “modernity”. Yet Caesar and his ilk perhaps turn out not to be so bad as once feared, seducing with false promise as they show off their wealth and prosperity whilst subtly gesturing to their superior numbers and technology to assure any doubters. The colonisers are technically our heroes – the spacemen and women from the beginning we’ve all but forgotten about have come back in time from the position of the imperialists, hoping to find out how Cleopatra’s doomed romantic destiny might inform modern insurgency, but have discovered only a righteous loathing for “occupying” forces and their relentless tendency to ruin the lives of pure hearted women for their own nefarious gains.

Perhaps emboldened by A Thousand & One Nights, Tezuka cannot resist inserting a number of idiosyncratic gags for manga enthusiasts, including a few references to his own back catalogue, while also sending up the pop-culture of the day. Cleopatra is, on one level, a distinctly lowbrow effort filled with deliberately cartoonish slapstick, silliness, and anarchic humour but it also harbours a subversive idea at its centre which was certain to prove popular with a particular section, at least, of its target audience. Mixing live action footage with experimental animation, if retaining a cartoonish sensibility, Cleopatra is a strange interdimensional political metaphor but not without its charms even in its most outrageous moments.

Available on blu-ray from Third Window Films as a part of double release with Eiichi Yamamoto’s A Thousand & One Nights.

If you thought idol movies were all cute and quirky stories of eccentric high school girls with pretty, poppy voices then think again because Memories of You is coming for you and your faith in idols to make everything better. Directed by W’s Tragedy‘s Shinichiro Sawai, Memories of You (ラブ・ストーリーを君に, Love Story wo Kimi Ni) stars one of the biggest idols of them all – Kumiko Goto, only 14 years old at the time of filming. Seemingly inspired by classic Hollywood melodramas of the ‘50s, Sawai’s film finds its innocent protagonist attempting to live an entire lifetime in only six months as she succumbs to a cruel and relentless disease.

Giving no clue as to its eventual destination, Memories of You begins with two young men returning from a hiking trip. You can tell the pair are committed alpinists because of their distinctly alpine attire and by the way they look at a glockenspiel. In this early comic scene, Araki (Shingo Yanagisawa) is heading straight to an important job interview that he hopes will help him get his girl back if he’s hired so he’s talking a mile a minute whilst awkwardly changing into a business suit inside a photo booth.

The other young man, Akira (Toru Nakamura), runs into the star of film, Yumi (Kumiko Goto), on her way back from the hospital. Akira used to be Yumi’s tutor and it’s obvious she has kind of a crush on him. Unbeknownst to Yumi, the results of her tests are much more serious than might be assumed from her cheerful persona. Yumi has leukaemia and the doctors do not expect her to survive for more than six months at most.

Yumi’s devasted mother shifts her grief away from the pain of losing her only child, to that of her stolen future – no high school, no romance, no love, marriage, or children. Accordingly she asks teacher in training Akira for a considerable sacrifice – essentially, pretend to date Yumi and give her the kind of love story that she will never now be able to experience.

Needless to say, this is a little creepy given that Akira is in in his mid-twenties and Yumi is only fourteen. Of course, it’s all very chaste and innocent like something out of a shoujo manga but still even in 1988 the scenario rings alarm bells. Akira is conflicted about his new role as a fake boyfriend for a dying teenager but it would be heartless to refuse, though one may wonder about what effect all of this may have on his future chosen career.

The world of 1988 is noticeably sexist in that Yumi’s mother works as a cookery teacher, reminding her pupil’s that this is the most important course because they’ll all be competing with their future mother-in-laws in the great culinary battle to win their husband’s hearts. These girls are raised to be housewives and nothing more, although, Yumi’s mother is divorced and now has a career, is taking care of Yumi alone and is not particularly looking to remarry. So, swings and roundabouts in terms of social progress.

The film flits between the viewpoints of Yumi and Akira as they both try to adapt to this unusual situation. As is common in these kinds of films, Yumi is not quite as in the dark as everyone had assumed and is readying herself to say her final goodbyes. This also brings about a reunion with her long absent father who has emigrated to Canada where he has a new wife and younger daughter. Yumi’s family status is an uncommon one for 1988, yet there is relatively little stigma surrounding it. Perhaps her father’s return after three years is one factor in Yumi’s realisation of the seriousness of her condition (as her mother feared it might be) but the final reconciliation does at least bring her a little more calmness and stability.

Yumi’s illness is a mountain which cannot be conquered. The beauty of the natural world and the desire to overcome it, in a sense, through physical exertion are the chief motifs of the film as Yumi dreams of travelling to Switzerland – the spiritual home of alpinism (it would seem). The loving looks at the glockenspiel in the opening scenes develop into an underlying musical theme as they also recur during the lengthy cabaret sequence close to the film’s climax. Of course, Yumi finally attempts to climb her mountain with Akira as her guide but there is only so far she can proceed.

Despite its melodramatic touches and desire to be a grand tearjerker, Memories of You is too restrained to make the full force of its tragedy achieve the kind of emotional effect that it aims for. Filled with syrupy, orchestral music very much like that employed by classic Hollywood examples of the genre, Memories of You really wants the viewer to experience the intense sadness of such a young life taken by a cruel and indiscriminating disease but often overplays its hand. This isn’t helped by the unsettling nature of the “romance” between Akira and Yumi or the (entirely understandable) lack of chemistry between the leads who each give independently high quality performances. An interesting example of an “idol movie” which steps outside the genre norms, Memories of You doesn’t quite have the courage of its convictions but is another nicely photographed effort from Sawai.

End credits and title song (not sung by Kumiko Goto)