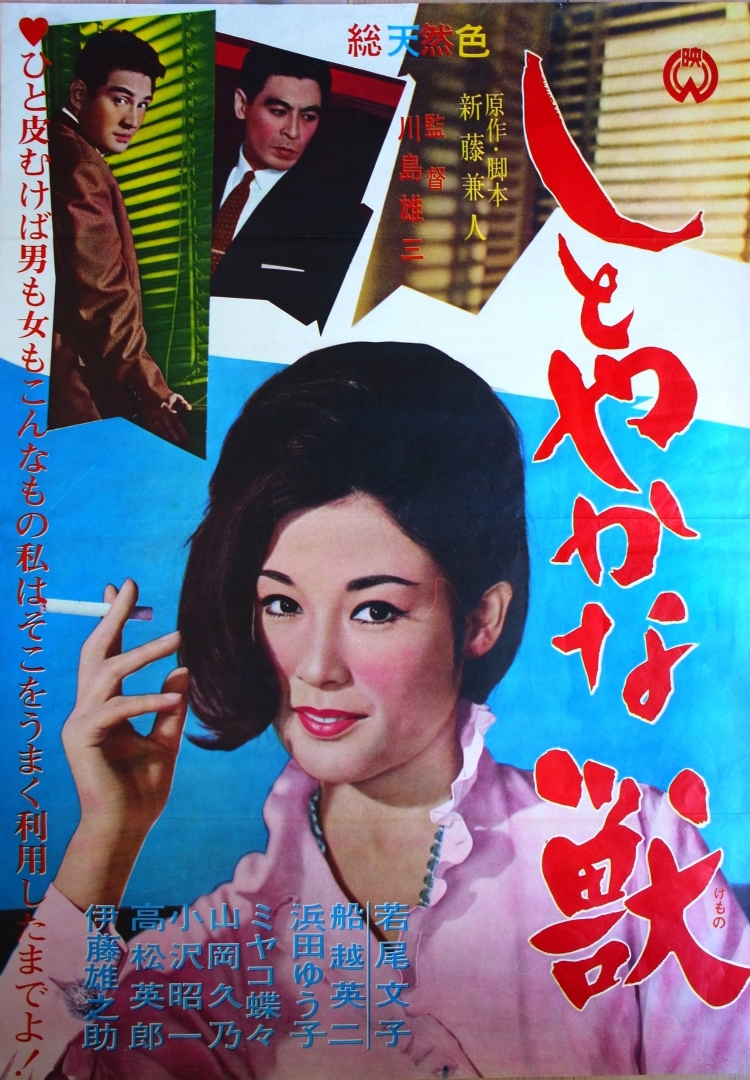 By 1962 the Japanese economy had begun to improve and with the Olympics on the horizon the nation was beginning to look forward towards hoped for prosperity rather than back towards the intense suffering that had defined the post-war era. There would be, however, a kind of reckoning to be had if not quite yet. Yuzo Kawashima’s Elegant Beast (しとやかな獣, Shitoyakana Kedamono) is perhaps among the first to start asking questions about what the legacy of the immediate aftermath of the war might be. It may have been impossible to survive with one’s integrity entirely intact, but how should one proceed now that there is less need to be so self serving, calculating, and cruel when there is more food on the table?

The Maedas may not be the best people to ask. Carrying the scars of their poverty, they have made a “comfortable” life for themselves in a cramped flat on the fifth floor of an ordinary walk-up apartment building. When we first meet them, dad Tokizo (Yunosuke Ito) and mum Yoshino (Hisano Yamaoka) are having a furious tidying up because they’ll shortly be receiving visitors, only unlike most they’re quickly trying to scuzz up the apartment so that they look sufficiently humble. When their guests arrive, it turns out to be the boss of their only son Minoru (Manamitsu Kawabata) who has come along with one of the artists he represents and his accountant, to have a word about possible embezzlement. Tokizo and Yoshino outdo themselves with humility, pointing out the simplicity of their surroundings, and appear offended that their son is being accused of thievery but of course in reality they know all about it and are willing accomplices in his scheming. Tokizo hasn’t had a steady job since coming back from the war and the entire family is supported by the kids with the remainder of their income coming from daughter Tomoko (Yuko Hamada) who has become the mistress of a famous author (Kyu Sazanka).

Universally unrepentant, cracks start to appear in the Maeda’s morally dubious existence when they begin to realise that Minoru is not quite on the level. He’s only been giving them a portion of the money he’s been stealing – something they can understand and perhaps even admire, if it were not that he’s given most of it to a lover to fund her hotel business. The surprise twist is that the lover is none other than the accountant at the company Minoru had been working for, Yukie (Ayako Wakao), who is a widow with a 5-year-old son (which is to say, not Minoru’s usual type). Now that the hotel is fully funded and the scam has been exposed, Yukie feels there’s no more need to associate herself with lowly punks like Minoru and draws the affair to a businesslike conclusion.

Yukie is, perhaps, the “elegant beast” of the title. Refined, seemingly sweet and innocent, she inspires trust and affection. The slightest suspicions are unlikely to fall on her – something she well knows and is prepared to use to her advantage, along with her sex appeal and, ironically, reduced desirability in the marriage stakes as a widow with a child. Yukie has her dreams and they are ordinary enough. She wants a peaceful, stable life in economic comfort alone with her son. She does not want to remarry and means to be independent which necessarily means industrious. Thus she needs to get her hotel business off the ground as quickly as possible. She needed money, a lot of money, much more than she could get “honestly” but she didn’t want to dirty herself with crime and so she used the tools at her disposal, making her “weakness” a strength as she later puts it. Using her womanliness as a weapon against venial men, she convinced them to ruin themselves on her behalf and thereafter resolved to put the past behind her.

The past is, however, difficult to forget. “Your mind still wears an old fashioned coat”, the quip happy Minoru tells his father as he laments the new society’s tolerance for youthful ebullience and reluctance to forgive the wartime generation for even its most recent transgressions. As much as they resent her, there is perhaps a grudging admiration for a woman like Yukie who has managed to outsmart them all while, technically at least, remaining on the right side of the law. Tomoko, on the other hand, seems to be losing out in playing much the same game by the old rules. Essentially pimped out by her dad, she’s damned herself by becoming the mistress of one man who is becoming rather bored of her family’s obvious attempts to bleed him dry, rather than fleecing several at the same time and bending them to her will as Yukie has managed to do. Old fashioned thinking won’t get you far in this world. The Maedas, however, seem to be out of ideas.

In the closing moments, they may ponder abandoning their hard-won apartment, believing that there’s always trouble brewing in the big city and the clean country air may be what they really need to thrive but, it’s clear that this insular claustrophobic environment filled with peep holes and tiny imprisoning windows will be near impossible to escape. Tokizo hasn’t left the apartment for the entire picture. A woman ascends the stairs, walking purposefully towards a future of her own making, while the Maedas remain locked inside unable to escape the painful legacy of post-war poverty for the bright, if no more ethical, lights of a consumerist future dancing quietly on the horizon. 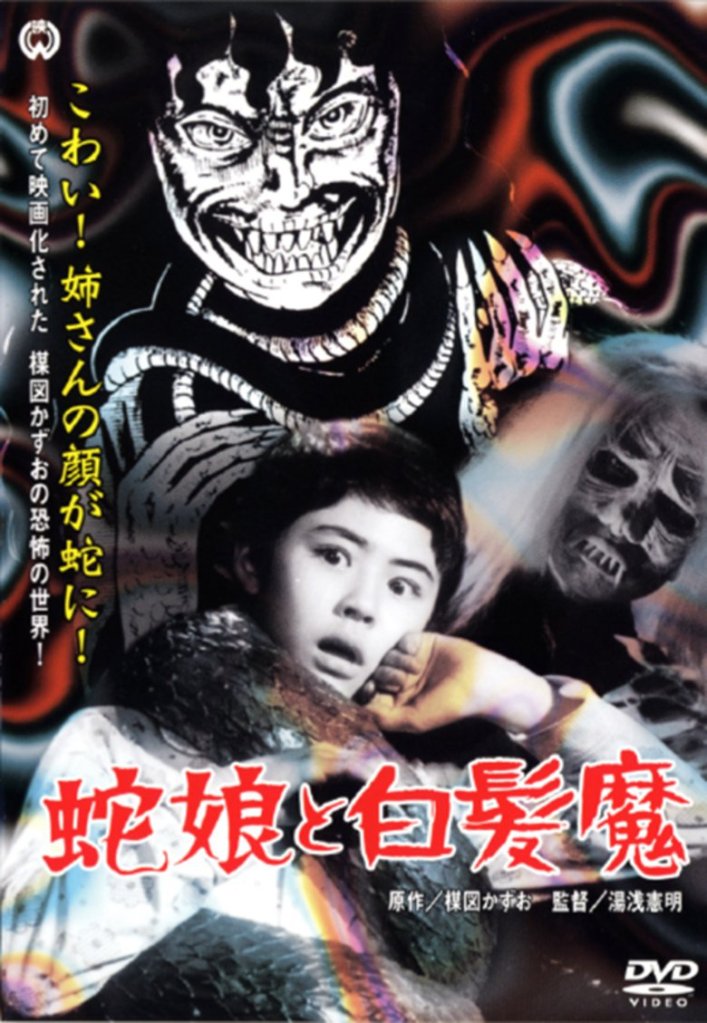 Little Sayuri has had it pretty tough up to now growing up in an orphanage run by Catholic nuns, but her long lost father has finally managed to track her down and she’s going to able to live with her birth family at last! However, on the car ride to her new home her father explains a few things to her to the effect that her mother was involved in some kind of accident and isn’t quite right in the head. Things get weirder when they arrive at the house only to be greated by the guys from the morgue who’ve just arrived to take charge of a maid who’s apparently dropped dead!

If that weren’t enough her “mother” calls her by the wrong name and then dad gets a sudden telegram about needing to go to Africa for “several weeks” to study a new kind of snake! On her tour of the house, Sayuri finds a room full of snakes, reptiles and insects (and also for some reason a large vat of acid?!) as well as a room with a buddhist altar where the food seems to disappear just as if Buddha himself were really eating it. Eventually, Sayuri is introduced to her secret sister, Tamami, who has slight facial disfigurement and a wicked disposition which has seen her locked away from view for quite some time…..

Based on the manga by Kazuo Umezu, Snake Girl and the Silver-Haired Witch (蛇娘と白髪魔, Hebi Musume to Hakuhatsuma) is, apparently, aimed at a younger audience which explains its child’s eye view of events but the film makes no concessions to the supposed softness of little minds. With a host of surreal imagery including dream sequences full of creepy, hypnotic spirals, and moments of shocking violence such as a large frog being suddenly ripped in half right in front of Sayuri’s eyes the film certainly doesn’t stint on blood, horror and general freakiness.

Sayuri herself seems largely unperturbed by these strange goings on outside of her nightmarish serpentine visions. She seems to have been well cared for at the orphanage and is happy to have found her family rather than just to be escaping the institution. On getting “home” she does her best to fit in right away, acting politely and trying to bond with her mother even in her confused state. She even tries to get on well with her mysterious sister despite the ominous warning to keep her very existence a secret from her father. Tamami, however, is a nightmare child with homicidal tendencies who isn’t interested in playing happy families with the girl who’s come to usurp her place in the household.

There’s a little more to the set up than just snake based horror (the clue being the Silver-Haired Witch of the title) but the secondary message seems to be one of remembering that the true beauty of a person lies not in their external appearance but in the goodness of their soul. The previously deformed Tamami is later said to be looking sweeter after having “redeemed” herself and Sayuri pledges to honour Tamami’s sisterly sacrifice by always remembering to hold fast and true to the beautiful things in her own soul without being swayed by worldly charms.

Snake Girl and the Silver-Haired Witch is more of a psychological horror tale than some of the effects laden efforts of the period. However, there are a fair few practical effects on show most notably during the dream sequences – one of which sees Sayuri actually fighting a giant snake with a sword, as well as the creepy spirals and the appearance of weird vampire-like snake women, dancing oni masks and the Silver-Haired Witch herself.

A children’s film that no one in their right mind would actually show to a child, Snake Girl and the Silver-Haired Witch is a freakishly psychological horror show seen through the eyes of a little girl. Part dreamscape and part terrifying reality, the film mixes the real and the imagined with a fiendish intensity and it just goes to show that sometimes you really do need to pay attention to the strange fancies of intrepid young ladies.

This trailer doesn’t have any subtitles but it is actually quite scary…..