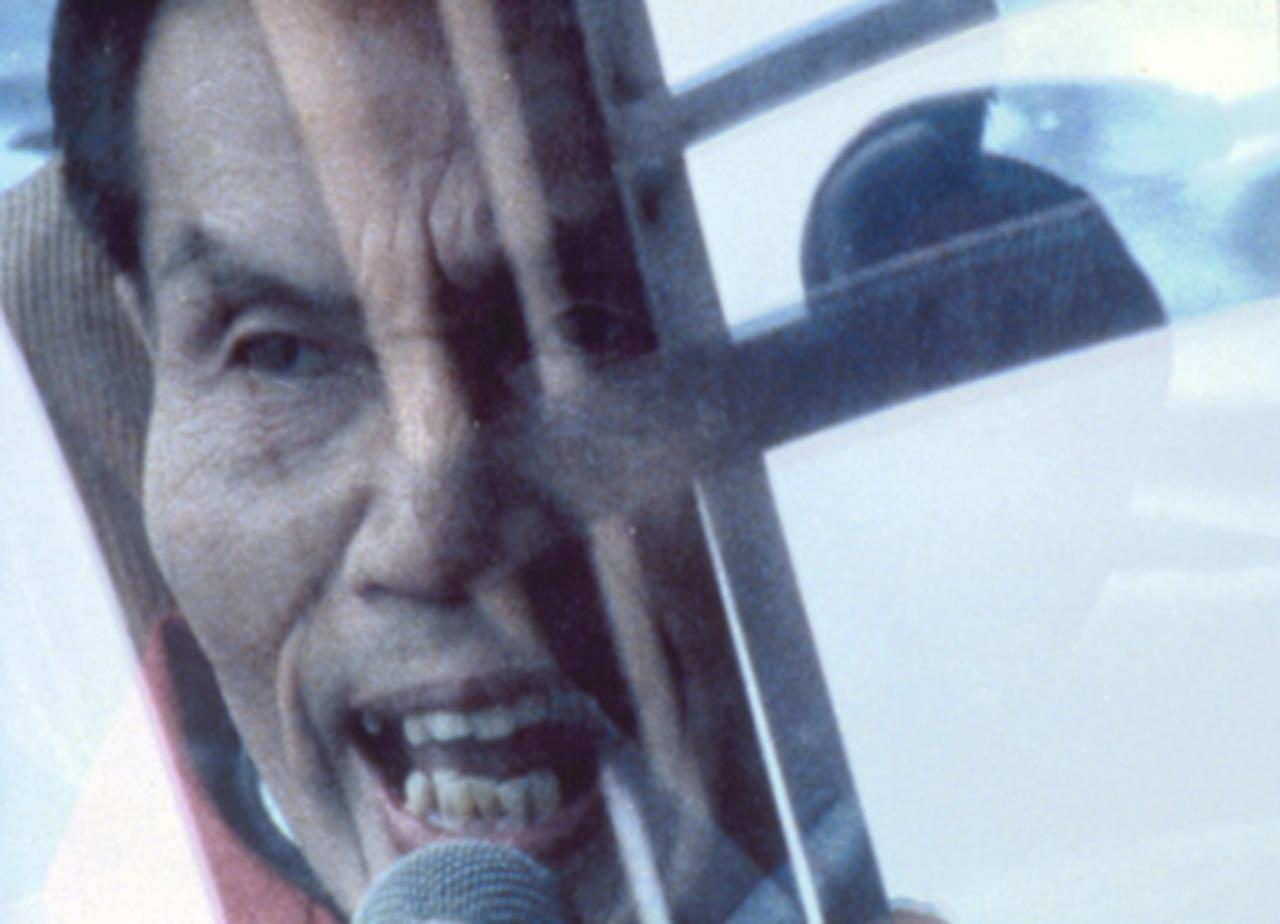 Written by Hayley ScanlonPosted on September 9, 2018November 11, 2019Leave a comment

The relationship between a director and a subject can often be a complex one. Who is really leading who and towards what end is a difficult enough question at the best of times, but when your subject is an unhinged crackpot with a definite agenda, a natural love of the camera, and an unpredictable violent streak, it’s an inescapable conundrum. Kenzo Okuzaki, a Pacific War veteran with a deeply seated grudge against the emperor for his refusal to acknowledge his war guilt, first came to the attention of director Shohei Imamura but a second stretch in prison for firing pachinko balls at the object of his wrath put paid to his directorial hopes. 10 years later Imamura passes his subject on to Kazuo Hara who finds himself increasingly at the mercy of his mercurial campaign for truth and reconciliation.

The main thrust of Okuzaki’s current activities lies in uncovering the facts behind the deaths of two enlisted men who were executed in New Guinea three weeks after the war was over. Okuzaki believes the men were murdered and lays the blame at the feet firstly of the officers on the ground and ultimately at those of the emperor who created the circumstances in which all of this horror was allowed to bloom. To assist him in his investigations, Okuzaki ropes in the families of the victims – one a Shinto priestess who is convinced she sees her brother in her dreams and on her altar, and the other a conflicted brother who just wants to know the truth. The truth, however, may be hard to hear, as one of the men Okuzaki corners tries to tell them. Like most of the others questioned about the events of almost forty years before, he advises the family that it’s better not to know while emphasising that their relatives died through no fault of their own.

What is probably obvious to Okuzaki but not to the relatively less cynical family members is that an issue is being skirted. The soldier makes out that he doesn’t want to go into the deaths because the men were executed for desertion – something which is absurd in itself when the war was already over, and that he did not want the family to experience the shame and social stigma of being related to “cowards” who failed in their “duty”. Such notions are already out of date by the late ‘80s, but evidently still weigh heavily on the minds of veterans. Wanting to spare others the pain and shame of discovering the truth about what happened in New Guinea is a frequent excuse offered by those questioned, but perhaps a way of deflecting their own reluctance to speak of such deeply traumatic, extremely difficult events.

Getting them to open up is not Okuzaki’s first thought. Okuzaki himself is a strange man with a disturbing aura and a tendency to self-aggrandisement. When we first meet him he’s acting as a go-between at a wedding of a man he met through his “activism” which is to say a fellow combatant in Okuzaki’s campaign against “The Establishment”. A wedding speech might not be the most appropriate moment to embark on a personal history that involves going to prison for murdering someone you “did not want” to murder as well as a litany of anti-establishment acts including the pachinko ball incident and distributing “pornographic” pictures of the emperor to shoppers at a Tokyo department store. Nevertheless, Okuzaki is extremely proud of these “achievements” which exemplify how he alone has continued to fight the good fight in the post-war world. He sees his original conviction as karma not for his actions in the Pacific but the wastefulness of his life afterwards. He now believes he was saved from New Guinea in order to educate the young about the horrors of war and ensure none of this ever happens again.

Problematically, his main weapon in this fight is violence. Okuzaki’s manner is one of extreme politeness, bordering on obsequiousness, but he is also direct and aggressive, becoming violent when his subjects decline to answer his questions. The relatives are there to shame the officers into speaking the truth through being directly confronted by the human costs of their actions, but Okuzaki’s personal bluster hasn’t thought through the various ways in which his tactics might make it more difficult for them to speak. After all, Okuzaki is a veteran of New Guinea himself, if these men could feel comfortable talking to anyone about their experiences, you’d think they could turn to someone like Okuzaki if only he were not so frightening a presence. Uncomfortably enough, the violence does seem to work and Okuzaki gets his answers through intimidation which leaves his quarry broken and compliant. Despite claiming to work for world peace, Okuzaki believes that his violence is justified by the worthiness of his aims, which you have to admit is an oddly familiar mantra.

His subject’s propensity for violence places Hara in a difficult position, as do his frequent attempts at engineering the situation including roping in his wife and a couple of male friends to pose as relatives of the deceased when the original couple tire of Okuzaki’s exploitative antics. Okuzaki quite obviously has a very clear aim for what he perhaps sees as a propaganda exercise for his ongoing cause which might stand in deep contrast to that of his director who is, after all, a bystander reconstructing narrative after the fact. Okuzaki emerges as a symbol of a nation’s repressed trauma, skittering between officious politeness and belligerent violence while offering a bizarre, quasi-religious philosophy about god’s plan for us all. Hara remains caught between conflicting impulses, unwittingly complicit in Okuzaki’s personal war against war while trying to maintain control in the face of his constant manipulations. As a portrait of a madman The Emperor’s Naked Army Marches On excels, painting Okuzaki as a product of his own mad times while refusing to back away from the bitter truths his madness is so keen to expose.