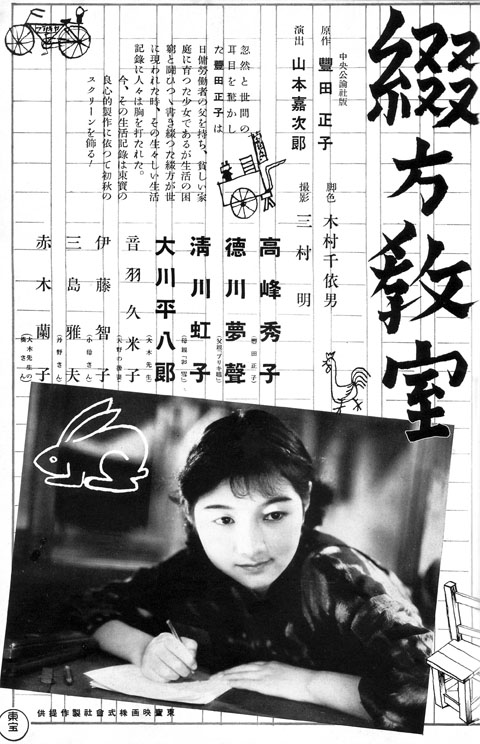 Children’s essay classes can yield unexpected revelations but sometimes it’s the tragedy behind the humour which catches the attention rather than a unique way of describing a situation not fully understood. Composition Class (綴方教室, Tsuzurikata Kyoshitsu) has something in common with the later Korean classic Sorrow Even Up in Heaven or even the more temporally proximate Tuition in drawing inspiration from the diaries of school age children but predictably it’s far less bleak in outlook. Though young Masako (nicknamed Maako) has her share of problems, her troubles are met with characteristic cheerfulness and a determination to carry on no matter what.

In a small town in North East Tokyo, 1938, Masako Toyoda (Hideko Takamine) lives with her parents and her two brothers in a humble home her family can barely afford. Disaster strikes when dad gets a letter from the court which he can’t read – Masako usually reads for him but letters from the court are still too difficult for a preteen schoolgirl. The family are behind on their rent and have heard that someone is trying to buy up the area with other families also facing possible eviction. Bright though she is, Masako might have to give up school and find a job as a maid while the family moves to stay with relatives who own a shoe shop. Luckily, none of that happens because the note was only about a rent increase (on the rent that haven’t paid for months).

The second crisis occurs when Masako’s teacher is taken with the essays she’s writing in class which are so real and honest that they espouse all the values he wants to teach the children. Around this time, the lady from next door, Reiko’s mother Kimiko, is leaving town (and her husband) and so gives away some her breeding rabbits as pets believing that a nice girl like Masako will be sure to take care of them and that they could use the extra money from selling the babies. Kimiko, thinking Masako is out of earshot, remarks that she was going to give some of the rabbits to the local bigwigs, the Umemotos, but even if they’re wealthy, they aren’t very nice and she wouldn’t like to think of her rabbits not being looked after. Masako naively records this minor detail in one of her essays which the teacher then sells to a local magazine. The Umemotos find out and aren’t happy which is a problem because dad gets most of his work through Mr. Umemoto who has a stranglehold on the local economy.

Through Masako’s diary and child’s eye view of the world, Kaijiro Yamamoto paints an oddly relaxed picture of depression era privation as the Toyodas endure their penury with stoicism and a belief the bad times will sometime end. Masako and her family have it a little better than some, but when bad weather puts an end to dad’s tinsmithing business and he’s forced into the precarious life of a day labourer things go from bad to worse. Now out of work more than in, the family are reliant on rice coupons to get by and spend one miserable New Year’s with no money for the first week of January when the biting cold makes it impossible to go out and forage for food. Masako writes of her embarrassment the first time her mother sent her to the shop with coupons and that she eventually got used to it, save for one occasion she ran into friends and had to quickly cover by saying she’d bought rice bran rather than collecting the rice dole. Like Masako, dad is a good natured soul though he’s also fond of drinking and is often let down or tricked out of his money, even being cheated out of his bicycle which he needs to keep working.

Sadness is all around from the man next door who’s so poor he doesn’t even have money for sake to the dejected Kimiko who eventually returns pale, drawn, and barely recognisable only to find her husband remarried to a much younger woman. Though Masako is a bright girl with a talent for writing her future is already limited. At one low point, her mother seems excited about the idea of selling Masako off to a geisha house where she will at least be fed, have pretty clothes, and maybe make a good match with the sort of man who marries former geishas. Needless to say, Masako is not very enthusiastic, and neither is her teacher who pledges to save her from such an unpleasant fate but luckily it never comes to that. Other girls will be going on to high school and university, but Masako counts herself lucky to have got a job in the local factory which will provide a steady income for her family. Though it’s a shame Masako is denied the same opportunities as the other girls because of her family’s poverty, she does at least pledge to keep writing even as she marches happily towards work and a (possibly) brighter future.