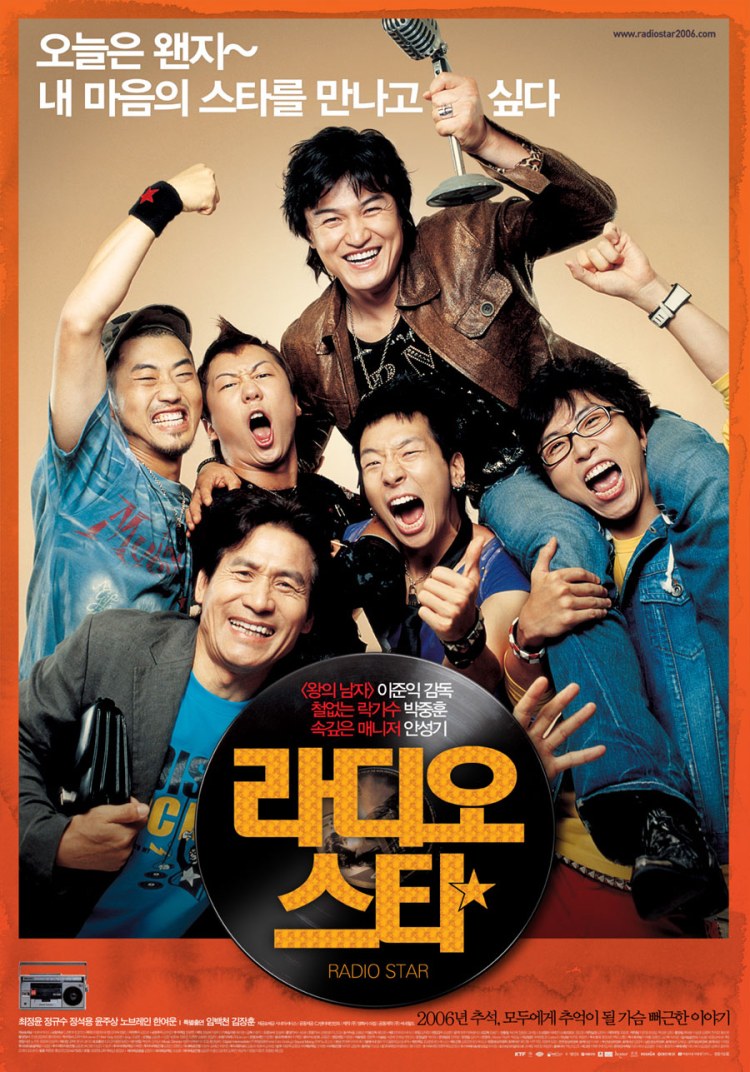 What do you do if you’ve just directed a box office smashing, taboo busting, giant mega hit? Well, you could direct Star Wars, but if you’re Lee Joon-ik you go back to basics with a low budget, heartwarming tale of friendship and failure. Radio Star (라디오 스타) reunites frequent costars Ahn Sung-ki and Park Joong-hoon whose shared history runs all the way back to ‘80s movies Chilsu and Mansu, Two Cops, and Nowhere to Hide. ‘80s nostalgia plays not a small part in Lee’s film as it takes a washed up one hit wonder from 20 years back and gives him a new opportunity to shine…if only he can get over himself first.

1988 was something of a banner year for Korea, a newly minted democracy the country put itself on the international map with that year’s Olympic Games taking place in Seoul. It was also a big year for rock star Choi Gon (Joong-hoon) who scored a chart topping mega hit with his song The Rain and You which won him a prestigious musical prize. However, it all went to his head and despite the best efforts of his best friend and manager Park Min-soo (Ahn Sung-ki), 18 years later in 2006 Gon is a cafe singer with a habit of getting into fights which land him in jail. After yet another “incident”, Min-soo is having trouble finding the money to bail his friend out, until, that is he hits on the opportunity of selling Gon’s name as a radio host in an isolated rural town.

Of course, this doesn’t go down well with Gon who’s still every inch the edgy rockstar despite his reduced circumstances. Eventually Min-soo talks him into taking the gig but he’s anything but enthusiastic about his new life as a disembodied voice talking to a handful of country bumpkins who still have transistor radios. Gradually, through learning to appreciate his surroundings Gon begins to understand exactly what it is that’s important in his life.

Playing off its central dynamic, Radio Star undoubtedly brings a lot with it in the casting of Ahn and Park whose similar trajectories add to the film’s otherwise straightforward narrative. Min-soo appears to have only the one client to whom he remains completely devoted (even neglecting his wife and daughter in the process) though it’s true Gon’s career has not gone in the hoped for direction. Still dressing like an ‘80s rock god with sunglasses, torn jeans and a leather jacket, Gon is his own worst enemy as he plays the rockstar game all the way into a jail cell he fully expects Min-soo will get him out of. His new assignment as a local radio DJ is one he finds beneath his dignity and only takes because he thinks it’s a favour to a friend (rather than a friend doing a favour for him), but when it brings him unexpected success he finds that it’s all worth nothing if Min-soo isn’t there to enjoy it with him.

Though many in the small town barely remember Choi Gon or his iconic, prize winning song, he still has a few fans in the form of local garage band East River (played by real life punk band No Brain) who become devoted supporters of the show even helping to spread the word and putting on a special celebratory tribute concert. Ironically enough, the show starts to take off with Gon’s nonchalant approach to hosting which often sees him abandoning the mike to a random local either by phone or getting a guest into the studio. Sliding into talk radio territory, Gon begins taking calls and offering (to begin with) flippant advice on such topics as jobs for the unemployed and the proper rules for card games but he’s soon involved in a campaign to help a shy florist declare his love to a bank cashier and eventually makes a heartfelt personal appeal in support of a little boy who’s father has run off, encouraging him to come back home if only to apologise for making the kid think it’s all his fault that his dad went away.

It’s undoubtably small scale stuff, which of course means that it’s infinite in scope as Gon’s growing sense of interconnectedness takes the show out of the local area and eventually all the way to Seoul after the East River boys’ internet fan site gives him a potentially global (well, to anyone who can speak Korean) reach. As Min-soo points out, stars don’t shine alone – they reflect the light they’re given, and therefore Gon’s only rises because of his friendship with Min-soo and the support he begins to win from the local people once he drops the aloof rockstar persona and begins to engage. Necessarily sentimental and drenched in the dust of broken dreams, Radio Star is a sometimes melancholic though warm tribute to the power of friendship and redemptive possibilities offered by unlikely second chances.

And sung by Korean punk band No Brain