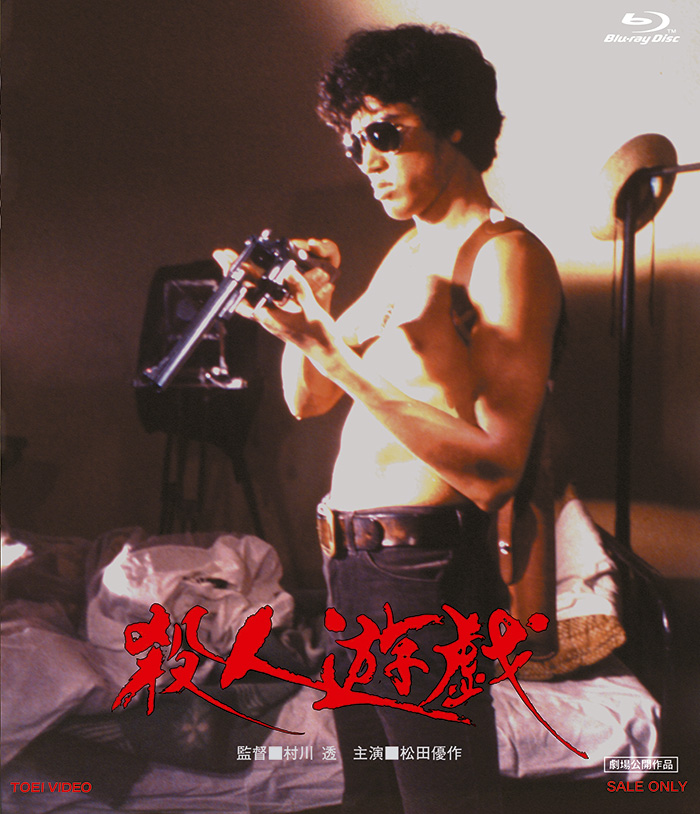 Following the success of The Most Dangerous Game, the second in what was to become a trilogy arrived within the year and once again stars Matsuda as the ice cold hitman Narumi. Sunnier in outlook, The Killing Game (殺人遊戯, Satsujin Jiken) unfolds along the same pattern as the first instalment as Narumi is dragged out of the shadows to intercede in a gang war only to find himself surplus to requirements.

Narumi (Yusaku Matsuda) has been retired from the killing game for the last five years and now lives a life of poverty and dissipation. Gone are his swanky apartment and stylish suits, now he lives in a bare hovel which is covered in dust and cobwebs, and he dresses like a farm boy in a white vest and jeans with a straw hat hanging on his back. He’s trying to lie low, but gets pulled into the kind of hostess bar he can’t really afford where he meets the first of two familiar faces which threaten to send him back into the middle of chaos. Akiko (Kaori Takeda), now a hostess at Bar Tako, is the daughter of the chairman Narumi bumped off in his last job before retiring but far from bearing a grudge against him, Akiko is grateful to have been set free. The second familiar face belongs to the same chairman’s former secretary/mistress, Misako (Yutaka Nakajima), who is now a mama-san at a bar popular with the local goons. All those years ago Narumi let Misako go in a moment of weakness and now regrets it but attempting to “reconnect” is going to land him right back in the thick of things.

Murakawa begins with a prologue which takes place in the noirish urban darkness of The Most Dangerous Game, but shoots in dreamy soft focus to emphasise that this is all memory before jumping forward five years. Exactly why Narumi has decided to give up a career in assassination is not revealed, nor is what he’s been doing the last five years, but he has apparently got himself an annoying sidekick who, in contrast to Narumi’s intense reserve, does not shut up. The first half of the movie is Narumi and his buddy trying to get by as outlaws including one humorous skit where they get themselves a van with a nudie pinup on the front plus a loudspeaker to humiliate debtors into paying up.

Things take a darker turn when Narumi runs into Misako – a chance meeting that seems almost like fate. Gradually the old Narumi begins to reappear. Deciding to pay Misako a visit he runs into her new man, gang boss Katsuda (Kei Sato), who figures out who he is and wants him to bump off another old gang boss. Narumi needs to get back in shape which he does via the tried and tested method of a training montage, lifting weights and running through the town with his trademark perm returning to its stylish buoyancy. This time around Narumi has buddy to help out, even if he only ends up being a liability, but the same strange dichotomy occurs – he may be an ace hitman, but Narumi is a mess without a gun in his hand.

Perhaps weathered by his experiences, Narumi is also much less cocky and much more unwilling to take a chance on trust. Once again he is betrayed by clients who’d rather not pay up and forced to play a “dangerous game” to bring the whole saga to a close in such a way as to keep both his life and the money. Rather than the surprising and largely inexplicable devotion of Dangerous’ Kyoko, Narumi finds himself torn between two women – the youthful Akiko who is grateful to Narumi for releasing her from an overbearing father, and the jaded Misako whose feelings for Narumi are complex, mingling fear, gratitude, attraction, and resentment into an irresistible storm of ambivalence. Again Narumi’s cool, animalistic aggression seems to be the key to his mysterious sex appeal but this time around there are no flickers of response as there were for the devoted Kyoko, these “relationships” are opportunistic and transactional.

Ironically titled, The Killing Game makes plain that Narumi will never be able to escape his chosen profession even if he wanted to. Without a gun in his hand Narumi is a pathetic wastrel, playing around at tuppenny schemes with his rather dim but talkative friend, and trying to play the big shot by buying out a hostess bar he is entirely unable to afford despite his recent windfall. The setting may be brighter, but Narumi’s word is still a nihilistic one in which he’s conditioned to expect betrayal and the only remaining vestiges of his humanity are his strange friendship with his bumbling sidekick and his ongoing fecklessness at coping with everyday life. Matsuda is as cool as ever in his effortless ability to cope with any given situation and kill with ruthless efficiency, but as Narumi edges ever closer to machine it is clear there is only one way to beat The Killing Game.