Until the later part of his career, Hideo Gosha had mostly been known for his violent action films centring on self destructive men who bore their sadnesses with macho restraint. During the 1980s, however, he began to explore a new side to his filmmaking with a string of female centred dramas focussing on the suffering of women which is largely caused by men walking the “manly way” of his earlier movies. Partly a response to his regular troupe of action stars ageing, Gosha’s new focus was also inspired by his failed marriage and difficult relationship with his daughter which convinced him that women can be just as devious and calculating as men. 1985’s Oar (櫂, Kai) is adapted from the novel by Tomiko Miyao – a writer Gosha particularly liked and identified with whose books also inspired Onimasa and The Geisha. Like Onimasa, Oar also bridges around twenty years of pre-war history and centres around a once proud man discovering his era is passing, though it finds more space for his long suffering wife and the children who pay the price for his emotional volatility.

Kochi, 1914 (early Taisho), Iwago (Ken Ogata) is a kind hearted man living beyond his means. Previously a champion wrestler, he now earns his living as a kind of procurer for a nearby geisha house, chasing down poor girls and selling them into prostitution, justifying himself with the excuse that he’s “helping” the less fortunate who might starve if it were not for the existence of the red light district. He dislikes this work and finds it distasteful, but shows no signs of stopping. At home he has a wife and two sons whom he surprises one day by returning home with a little girl he “rescued” at the harbour after seeing her beaten by man who, it seemed, was trying to sell her to Chinese brokers who are notorious for child organ trafficking.

Iwago names the girl “Kiku” thanks to the chrysanthemums on her kimono and entrusts her to his irritated wife, Kiwa (Yukiyo Toake), who tries her best but Kiku is obviously traumatised by her experiences, does not speak, and takes a long time to become used to her new family circumstances. Parallel to his adoption of Kiku, Iwago is also working on a sale of a girl of a similar age who ends up staying in the house for a few days before moving to the red light district. Toyo captures Kiwa’s heart as she bears her sorry fate stoically, pausing only to remark on her guilt at eating good white rice three times a day at Iwago’s knowing that her siblings are stuck at home with nothing.

Iwago’s intentions are generally good, but his “manly” need for control and his repressed emotionality proceed to ruin his family’s life. He may say that poverty corrupts a person’s heart and his efforts are intended to help prevent the birth of more dysfunctional families, but deep down he finds it hard to reconcile his distasteful occupation with his traditional ideas of masculine chivalry. Apparently “bored” with the long suffering Kiwa he fathers a child with another woman which he then expects her to raise despite the fact that she has already left the family home after discovering the affair. Predictably her love for him and for the children brings her home, but Iwago continues to behave in a domineering, masterly fashion which is unlikely to repair his once happy household.

Kiwa is the classic long suffering wife, bearing all of Iwago’s mistreatments with stoic perseverance until his blatant adultery sends her running from marriage to refuge at the home of her brother. Despite the pain and humilation, Kiwa still loves, respects, and supports her husband, remembering him as he once was rather than the angry, frustrated brute which he has become. Despite her original hesitance, Kiwa’s maternal warmth makes a true daughter of Kiku and keeps her bonded to the eldest and more sensitive of her two sons, Ryutaro, even if the loose cannon that is Kentaro follows in his step-father’s footsteps as an unpredictable punk. Her goodheartedness later extends to Iwago’s illegitimate daughter Ayako whom she raises as her own until Iwago cruelly decides to separate them. For all of Iwago’s bluster and womanising, ironically enough Kiwa truly is the only woman for him as he realises only when she determines to leave. Smashing the relics of his “manly” past – his wrestling photos and trophies, Iwago is forced to confront the fact that his own macho posturing has cost him the only thing he ever valued.

Gosha tones down the more outlandish elements which contributed to his reputation as a “vulgar” director but still finds space for female nudity and frank sexuality as Iwago uses and misuses the various women who come to him for help or shelter. More conventional in shooting style than some of Gosha’s other work from the period and lacking any large scale or dramatic fight scenes save for one climactic ambush, Oar acts more as a summation of Gosha’s themes up until the mid-80s – men destroy themselves through their need to be men but also through destroying the women who have little choice but to stand back and watch them do it. Unless, like Kiwa, they realise they have finally had enough.

Short clip from near the beginning of the film (no subtitles) 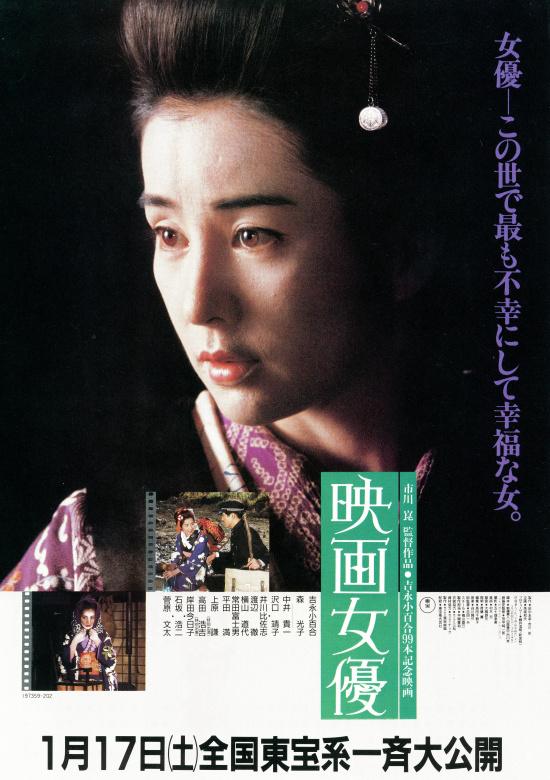 Kon Ichikawa was born in 1915, just four years later than the subject of his 1989 film Actress (映画女優, Eiga Joyu) which uses the pre-directorial career of one of Japanese cinema’s most respected actresses, Kinuyo Tanaka, to explore the development of Japanese cinema itself. Tanaka was born in poverty in 1909 and worked as a jobbing film actress before being “discovered” by Hiroshi Shimizu and becoming one of Shochiku’s most bankable stars. The script is co-written by Kaneto Shindo who was fairly close to the action as an assistant under Kenji Mizoguchi at Shochiku in the ‘40s before being drafted into the war. A commemorative exercise marking the tenth anniversary of Tanaka’s death from a brain tumour in 1977, Ichikawa’s film never quite escapes from the biopic straightjacket and only gives a superficial picture of its star but seems content to revel in the nostalgia of a, by then, forgotten golden age.

The film begins with the young Tanaka awaiting a visit from her mentor, Hiroshi Shimizu (Toru Watanabe), whom her family are keen to thank for bringing them all to Tokyo away from their life of hardship. Although everyone is very happy for Tanaka’s success, there is shadow hanging over the party in the form of missing oldest brother Ryosuke who went on the run to avoid the draft and has not been heard of since.

Shimizu gives Tanaka (Sayuri Yoshinaga) her first roles at Shochiku where she becomes a contract player but is put out when another director, Heinosuke Gosho (Kiichi Nakai), wants to give her a leading role. Overruled by studio bosses, Shimizu becomes increasingly jealous of Tanaka’s career – a situation which is further complicated by the couple’s growing romantic entanglement which sees them living together in an unofficial marriage allowing Tanaka to continue acting. However, Shimizu continues to meddle in Tanaka’s professional life whilst also continuing his hard drinking, womanising playboy lifestyle. The couple eventually divorce but reunite from time to time on the film set.

Vowing never to marry again, the rest of Tanaka’s life is dedicated to acting and sees her working with some of the best directors of the age including Ozu (Shigemitsu Ogi) and later Mizoguchi (Bunta Sugawara). It is Tanaka’s professional and personal relationship with Mizoguchi which occupies the second half of the film. Judging by the first experience on the now lost Woman of Osaka in 1940, you wouldn’t think the two would ever wish to work together again though they eventually completed fifteen films together over the next fifteen years.

Mizoguchi’s process is completely different from any other Tanaka had worked with. Rather than meeting to rehearse and discuss the work, Mizoguchi abruptly sends her a lifetime’s supply of books about bunraku and changes the script that she has painstakingly committed to memory with on set rewrites communicated via a large blackboard he expects the actors to read from. Exasperated, Tanaka finally asks him for actual direction but he coldly states that she’s the actress and her acting is not part of his job description. Mizoguchi and Tanaka are very different people but each driven and ambitious so their frequent locking of horns produces a fiercely creative collaboration in which each was able to find worth even if it was frequently difficult.

The film ends around the time of Life of Oharu which would mark the final time the pair would work together. In terms of the film’s narrative, this unspoken development is foreshadowed by the idea that the two artists are heading in different directions but in the real world the reasons are a little less clear. Tanaka became the second woman to direct a feature film with Love Letters in 1953 which was even featured at Cannes, but for reasons unknown Mizoguchi attempted to block her access to the Director’s Guild of Japan, effectively ending both their friendship and any professional relationship. Ironically enough, Actress seems to imply that Tanaka’s desire to direct may have been inspired by Mizoguchi and his all powerful on set status prompting her to wonder how he does it, and, perhaps how she could do it too.

Ichikawa weaves the history of Japan through its cinema into the narrative to recount the changing tastes of the eras as naturalism came in and out of fashion and Japanese films began to experience international as well as domestic acclaim. Skipping huge portions of time to focus on the two directors – Shimizu and Mizoguchi, Ichikawa avoids mentioning Tanaka’s post-war visit to America which had a profound impact on her later career, not only in what she learned there but also in the extremely hostile reception she received on returning home. The main takeaway from his depiction of Tanaka is a woman ahead of her time, independent and headstrong, willing to work hard to achieve the things she wanted to achieve even if flying in the face of social convention though it makes no particular judgement on her character other than in her success as an actress.

Taking on the conceit of being a film about film, Ichikawa’s sets are theatrical, creating a deliberately artificial, half unreal world. This also extends into the scriptwriting which is extremely talky and more like a stage play than film, offering pointed, long stretches of monologuing which are already far away from the more naturalistic approach of early talking cinema. Characters have improbable, exposition filled conversations in which they each tell each other things they already know for the audience’s benefit – an effect which enhances the overall theatricality, but does draw attention to itself and eventually becomes wearing. Ichikawa’s picture of Tanaka is one of steely determination and of a woman ahead of her time, but even if Actress proves less than enlightening regarding its subject it does help to shed some light on both classic Japanese cinema and that of the late 1980s.