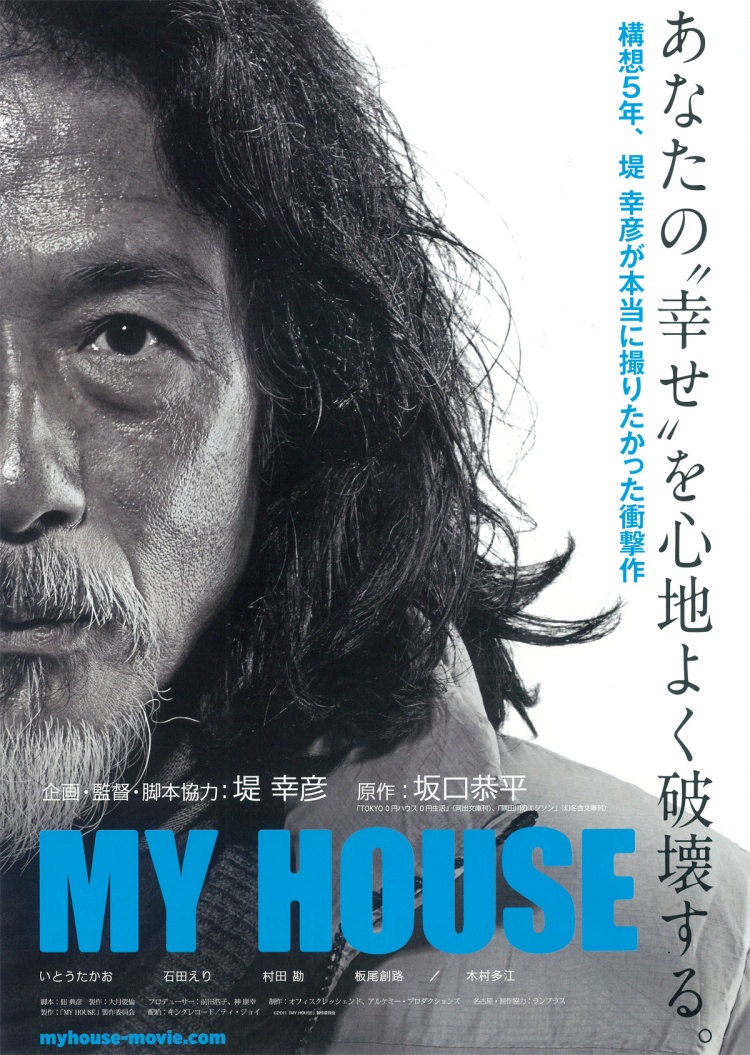 Yukihiko Tsutsumi has made some of the most popular films at the Japanese box office yet his name might not be one that’s instantly familiar to filmgoers. Tsutsumi has become a top level creator of mainstream blockbusters, often inspired by established franchises such as TV drama or manga. Skilled in many genres from the epic sci-fi of Twentieth Century Boys to the mysterious comedy of Trick and the action of SPEC, Tsutsumi’s consumate abilities have taken on an anonymous quality as the franchise takes centre stage which makes this indie leaning black and white exploration of the lives of a group of homeless people in Nagoya all the more surprising.

The film begins with its hero, Suzumoto, pulling a cart followed by his friends with other supplies and equipment. Arriving at their appointed destination, the men and women embark on a process they’ve obviously enacted a thousand times before. Dismantling their cart, they arrange the components for a kind of prefab house made out of found materials and propped up on crates.

Though the life may seem impossible to those from the outside – as it does to the well meaning men from the council eager to get the mini commune to move on by dangling a promise of sheltered accommodation or assistance, but thanks to Suzumoto’s innovations they have access to many of the benefits of the modern world from television to laptops. The main source of income comes from recycling – collecting tin cans, bottles, cardboard etc to be sold back to scrap merchants and recycling plants. It’s not easy money to make and there isn’t much of it but Suzumoto has his routine well worked out and is able to maximise his takings by cutting deals with householders and businesses for handiwork in return for what is essentially rubbish.

Getting into a discussion with a hotelier, Suzumoto is offered a regular job and a place in company accommodation but turns it down. He likes his life. It might seem hard to others and it is annoying to be continually dismantling and rebuilding your house, but the innovation appeals to him. He likes to work and to make things work. He wouldn’t want to be cooped up and constrained by the world of contracts and salaries and taxes.

The freedom and simplicity of Suzumoto’s life is contrasted with a seemingly ordinary middle class household which is defined by its tension and sterility. School boy Shota is an ace student but his austere father pushes him hard, allowing him little freedom or responsibility. Nursing a mild addiction to Pepsi, Shota’s only friend is the pet turtle he keeps in a tank in his wardrobe. While his father returns home only to shout at everyone and then go to bed, Shota’s mother is as obsessed with cleaning as he is with Pepsi and rarely leaves the house. Talking to almost no one, Shota’s mother’s existence is one of cold rigidity, living in fear of her domineering husband and accidentally neglecting her stressed out son in the process.

Through a series of inevitable coincidences the two worlds will clash with tragic consequences on each side. Tsutsumi doesn’t seek to glamorise life on the streets or paint it as some kind of hippyish quest for better living, but he does dare to suggest that Suzumoto’s self reliance and inner calm are much more healthy than the fear and repression which make Shota’s home as much of a prison as the tank he traps his turtle in. Suzumoto and his friends are looked down on, hassled by the authorities, and accused of crimes they did not commit but they are the victims and not the instigators of violence. Tension bubbles over and misses its target as rage against authority and society at large is redirected towards its most vulnerable citizens.

Suzumoto takes all of this in his stride, as he always does, dismantling his house only to rebuild somewhere else hoping only to continue the cycle while Shota is left to ruminate on the consequences of his actions still trapped inside the empty pressure cooker of his family home. Tsutsumi’s elegantly composed black and white aesthetic adds to the contemplative edge as two worlds are thrown into stark contrast but the one central tenet is the enabling factor for both – the intense pressures and total indifference of the mainstream world towards those attempting to live within in it.