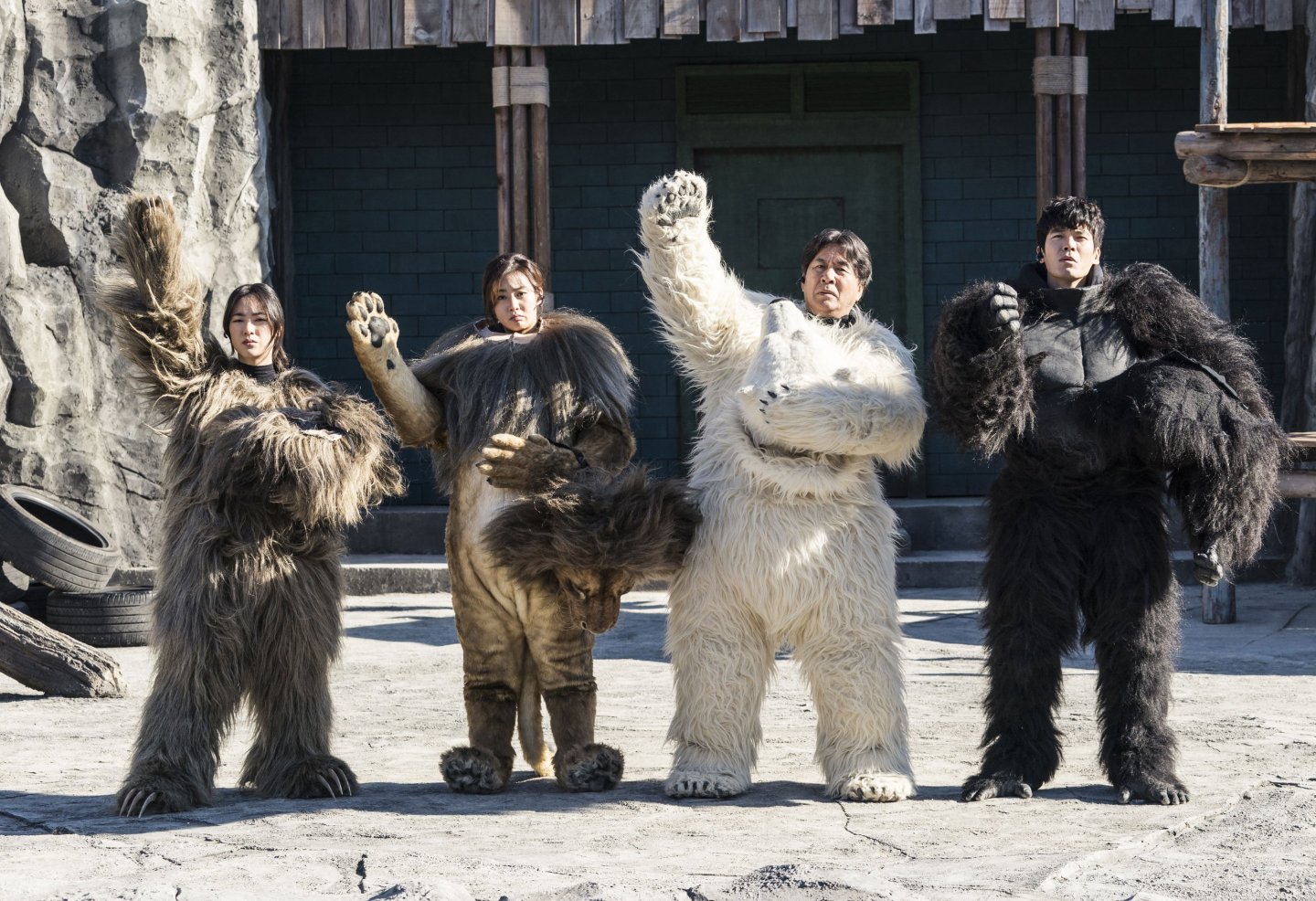 A corporate stooge begins to reassess his life choices in Son Jae-gon’s capitalist satire, Secret Zoo (해치지않아, Haechijianha). As someone belatedly points out, no matter how nice you make the enclosure, you can’t get away from the fact you’re in jail and aspiring lawyer Tae-soo (Ahn Jae-hong) might have to admit that he’s no more free than the animals he’s sent to oversee (or not, as we’ll find out) when he’s randomly sent to take over a failed wildlife park at the behest of his shady boss.

Currently a temp working out his probation at top three legal firm JH Law, Tae-soo is desperate to be taken on as a full-time employee but as he explains to his sister who wants to sue some thugs bullying her son, that largely means he’s basically just an errand boy taking care of the unreasonable demands of their incarcerated clients who are in the main chaebol sons accused of fraud and embezzlement. JH Law is under siege from protestors angry at their role in perpetuating chaebol influence and siding with large conglomerates to frustrate workers’ rights and enable exploitative working practices. Yet it’s not squeamishness that he’s wound up working for such an awful company that has Tae-soo too embarrassed to attend the reunion for the “third rate” uni he graduated from, but shame that he is only a temp not a full-time employee. That’s part of the reason he instantly accepts a strange offer from his boss to head up Dongsan Park with the promise that he’ll be taken on as a regular employee in Mergers and Acquisitions if he can turn it around in three months.

When he arrives, however, Tae-soo gets something of a shock. Most of the park’s most valuable animals have already been seized by its creditors, and international safeguards regarding the trafficking of live animals ensure that he cannot simply buy more within the three month time limit. After being surprised by a stuffed tiger while drunk after the welcome party and catching sight of some photos from a mascot day Tae-soo has a bright idea. They’ll simply have hyperrealistic costumes made and sit in the enclosures themselves keeping far enough away that the customers hopefully won’t know the difference. After all, when someone tells you’re visiting a zoo it probably doesn’t occur to you to question whether the animals are “real”.

Secret Zoo, or more accurately a zoo with a secret, is on one level a mild satire on public perception and fake news. You hear the word zoo and have a set of expectations. Unless something happens to convince you otherwise, your brain naturally smoothes over any minor issues you might have because it would be ridiculous for someone to “fake” a zoo. Despite the evidence of his eyes, the only thing the corporate stooge sent to inspect finds suspicious is the animals’ “funny” names which all end in the same syllable. The zoo becomes an unexpected viral phenomenon when Tae-soo, wearing the polar bear suit, is snapped drinking Coca-Cola just like the advert but even then no one questions the idea that he’s not a real polar bear, or that it’s perhaps not ethical for a polar bear to be drinking Coca-Cola in the first place or for guests to be throwing objects into the enclosures and especially not with the intention of harming the animals.

Only conflicted doctor So-won (Kang So-ra) questions the zoo ideology, pointing out that however nice they make the enclosures it’s still a prison for animals that they are in essence exploiting. Secret Zoo is at pains to make a direct comparison between Tae-soo caught in the corporate cage of modern-day capitalism and the animals he’s impersonating as prisoners of the world in which they live. Tae-soo’s shady boss is, as might be expected, essentially corrupt. As Tae-soo begins to figure out, if this job were important he wouldn’t be doing it, he’s been sent because he’s desperate and expendable while his boss snidely remarks that it’s not a job to be done by someone “brought up soft” hinting at the class snobbery that further oppresses him as a “weed” coming up from a “third class” university.

So desperate to achieve conventional success by becoming a member of the elitist club, Tae-soo doesn’t really question what it takes to get there until bonding with the employees and becoming invested in the idea of saving the zoo only to discover that his shady boss never really meant to “save” it anyway. Yet the only solution on offer is it seems merely a nicer cage which in power rests firmly with the same corrupt chaebols only now persuaded that it’s in their interest to be more socially responsible as a means of improving their personal brand which of course merely enables them to continue their exploitative business practices even if implying that Tae-soo too has a modicum of power in the ability to manipulate them. Black Nose, the polar bear driven mad by confinement, cannot be returned to the wild but regains his “freedom” in a polar bear sanctuary in frosty Canada, Dr. So-won too freeing herself of her problematic need to protect him by keeping him close. Tae-soo getting a dose of his own medicine in being observed by a young couple who press him for a selfie as the director of that “fake zoo” seems to have gained a little more awareness of what it’s like to live in the enclosure of an inherently corrupt social system akin to corporate feudalism but like Black Nose has perhaps at least improved the quality of his captivity.