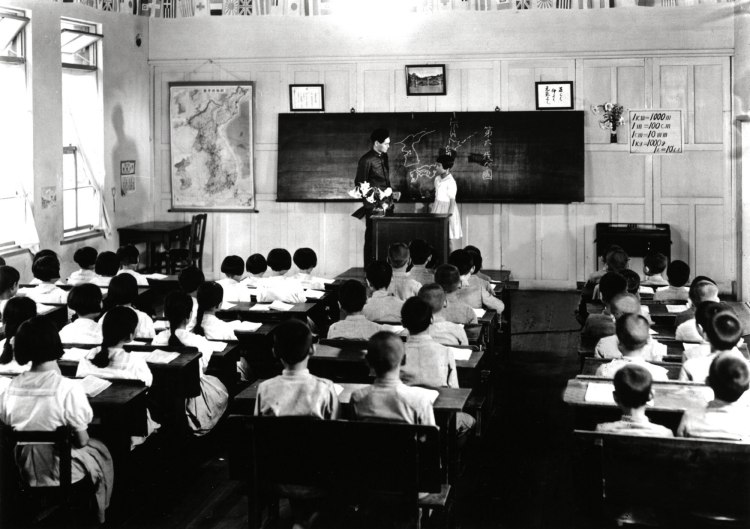 Long thought lost, Tuition (수업료, Su-eop-ryo) is an unusual example of Korean film made during the Japanese colonial period. Released in 1940, the film depicts the lives of ordinary people facing hardship during difficult economic conditions though there is no reference made to the ongoing military situation. The story itself is inspired by a prize winning effort by a real life school boy who was doubtless experiencing something similar to the trials of Yeong-dal, however, directors Choi In-gyu and Bang Han-joon made several subversive changes to the script at the filming stage in an attempt to get around the censorship regulations.

Schoolboy Yeong-dal lives alone with his grandmother after his parents have left to try and make more money. The pair are struggling to get by already and the grandmother is so exhausted that she’s beginning to become too ill to continue working. Yeong-dal’s biggest preoccupation is the money for his school fees, they’re already a few months behind and besides it being embarrassing in front of his friends, he’s worried he’ll be kicked out altogether. They’ve also got the landlord breathing down their necks and the threat of eviction hanging over them too. When the worst comes to the worst, Yeong-dal sets off on a long and arduous journey walking to his aunt’s house in a distant village in the hope that she will lend him the money for his school fees.

The original script for Tuition was written entirely in Japanese as was common for the era. However, at the shooting stage, the directors put most of the dialogue back into Korean other than that which would naturally occur in Japanese. The kids are taught in Japanese at school – their Japanese tutor doesn’t even really understand Korean as can be seen when he decides to visit Yeong-dal’s home to see why he hasn’t been coming to class and struggles to converse with his grandmother. At home and in the streets everyone speaks Korean to each other, Japanese is reserved for official occasions only.

That said, the tuition the children are receiving is entirely geared to turning them into loyal Japanese citizens. They read about mainland Japanese history with an unusual amount of passion for school kids reciting from a text book, enjoying exciting stories of ancient battles somehow separated from the real political context of the time. Likewise, as Yeong-dal makes his arduous solo road trip, it’s a Japanese military song he sings to raise his spirits rather than a Korean folk tune or familiar lullaby.

Aside from the political ramifications, the reasons the film proved so popular at the time were more likely to do with the feel  good story of a small boy so committed to his studying, and to the honesty of being able to pay for it, that he’d walk miles and miles all alone solely for the promise of being able to ask a family member to borrow the money. Actually, his aunt seems to be extremely well off when he gets there and gives him a huge bag of rice as well as the tuition fees so one has to wonder why Yeong-dal and grandma haven’t upped sticks and gone to stay with her ages ago rather than endure this life of extreme hardship and near starvation. It is, however, a happy ending for little Yeong-dal who finds his perseverance and determination rewarded and not only that, his struggles have also inspired his schoolmates to start a charity collection to help other pupils who find themselves unable to pay the school fees.

Tuition isn’t particularly notable in terms of its directing style which remains relatively simple though typical of the time, but does offer an interesting window into the cinema of the late colonial period which has often been difficult to see. The film’s child’s eye view of economic hardship which is filled more with shame and worry than it is with fear, also make it an interesting addition to the world of depression era children’s cinema inviting comparisons with the films of Hiroshi Shimizu which appear to have influenced Tuition to some degree. Only recently rediscovered, Tuition is an invaluable resource for the history of Korean cinema but is also the heartwarming tale of an earnest little boy winning through despite almost insurmountable odds.

Tuition is the fifth film in the Korean Film Archives The Past Unearthed Project which is attempting to recover some of these lost and hidden films from the 1930s and 40s. Like the majority of releases from the Korean Film Archive, Tuition includes English subtitles and comes packaged in an elegant slipcase. The set also includes a beautifully designed booklet which resembles an old fashioned school excercise book and as usual also contains an English translation of the original Korean text. The DVD itself is region free!