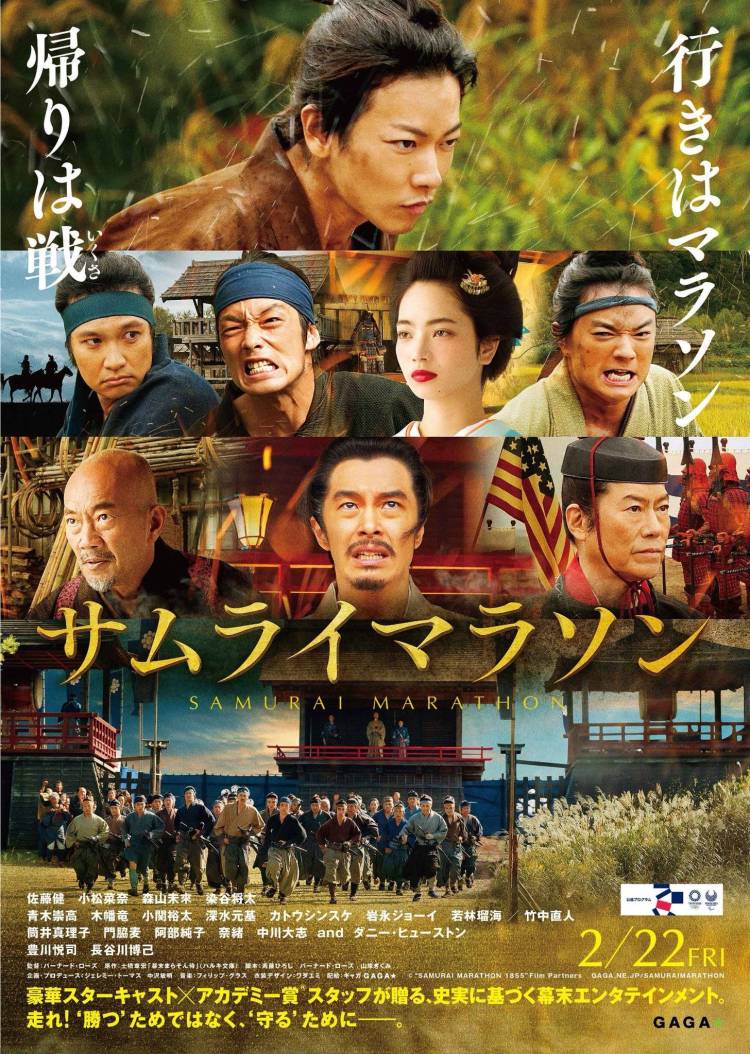 After two and a half centuries of peaceful slumber, Japan was jolted out of its isolation by the arrival of Commodore Perry’s Black Ships. The sudden intrusion proved alarming to most and eventually provoked a new polarisation in feudal society between those who remained loyal to the Shogun and the old ways, and those who thought Japan’s best hope was to modernise as quickly as possible to fend off a foreign invasion if it did eventually arise as many feared it would. Lord Itakura (Hiroki Hasegawa) has a foot in both camps. He has no desire to move against the Shogun, but fears that centuries of peace have made his men soft and complacent. His solution is to institute a “Samurai Marathon”, forcing his retainers to run 36 miles to prepare for a coming battle.

If you’ve spent your life sitting around and occasionally waving a sword at something just to keep your hand in, suddenly trying to run 36 miles might not be the best idea, as many samurai keen to win favour through racing glory discover. There is, however, an additional problem in that, unbeknownst to anyone, samurai accountant Jinnai (Takeru Satoh) is a secret ninja spy for the shogun. Confused by the preparations for the race, he reported that a possible rebellion was in the offing only to bitterly regret his decision on realising Itakura’s anxieties are only related to external, not internal, strife. All of which means, the Shogun’s men are on their way and Itakura’s retainers are sitting ducks.

Helmed by British director Bernard Rose, Samurai Marathon (サムライマラソン) plays out much more like a conventional European historical drama than your average jidaigeki. Where samurai movies with an unusual focus tend to be comedic, Rose opts for a strangely arch tone which is somewhere between po-faced Shakespeareanism and post-modern irony. Rather than the stoical elegance which defines samurai warfare, the violence is real and bloody, if somewhat over the top in the manner of a gory Renaissance painting complete with gasping severed heads and gruesome sprays of dark red blood.

A chronicle of bakumatsu anxiety, the film also takes a much more pro-American perspective than might perhaps be expected, taking the view that the arrival of the Americans heralded in a new era of freedom and the origins of democracy rather than the more ambivalent attitude found in most jidaigeki which tend to focus much more strongly on the divisions within samurai society between those who wanted to modernise and those who just wanted to kick all the foreigners back out again so everything would go back to “normal”. Itakura, like many, is suspicious of foreign influence and the gun-toting, yankee doodle humming Shogunate bodyguard is indeed a villain though it’s Itakura himself who will end up firing a gun as if conceding that the future has arrived and the era of the sword has passed.

Ramming the point home, Itakura is also forced to concede to the desires of his wilful daughter, Princess Yuki (Nana Komatsu), who wanted to travel and see the world while her society (and conventionally minded though doting father) insisted all there was for her was marriage and a life stuck inside castle walls. Managing to escape and disguising herself by cutting her hair and putting on peasant clothes, Yuki is able to evade detection longer than expected precisely because few people have ever seen her face. She also gets to make use of some of the samurai training she’s received by holding her own out on the road, though it seems improbable that her father would let her ride out alone even if he finally allows her free rein to go where she chooses.

Meanwhile, other ambitious retainers try to use the race to their own advantage though there’s poignant melancholy in one lowly foot soldier’s (Shota Sometani) dreams of being made a samurai considering that in just a few short years the samurai will be no more. The final sepia shift into the present day and a modern marathon may be a stretch, as might the unnecessary final piece of onscreen text informing us that we’ve just watched the origin story for the Japanese marathon, but the main thrust of the narrative seems to be that the samurai were running full pelt into an uncertain future, preparing to surrender their swords at the finish line. An unusual take on the jidaigeki, Samurai Marathon perhaps takes an anachronising view of Bakumatsu chaos in which the samurai themselves recognise the end of their era but finds its feet on the road as its self-interested heroes find common purpose in running home.

Samurai Marathon screens as the opening night gala of the 2019 New York Asian Film Festival on June 28 where actress Nana Komatsu will be in attendance to collect her Screen International Rising Star Asia Award.