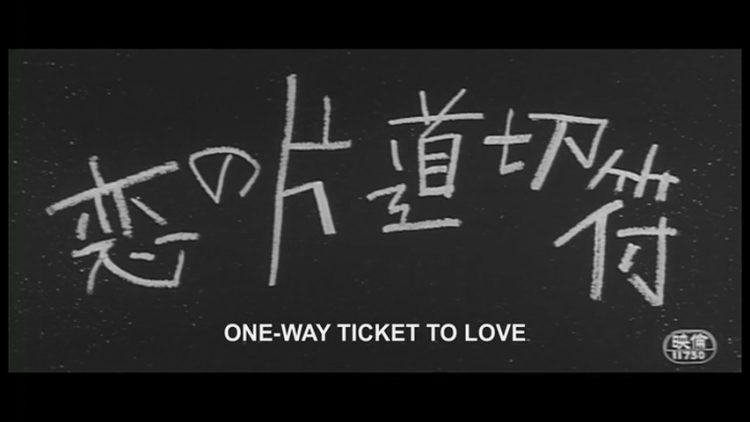 Although Masahiro Shinoda has long been admitted into the pantheon of Japanese New Wave masters, he is mostly remembered only for his 1969 adaptation of a Chikamatsu play, Double Suicide. Less overtly political than many of his contemporaries during the heady years of protest and rebellion, Shinoda was a consummate stylist whose films aimed to dazzle with visual flair or often to deliberately disorientate with their worlds of constant uncertainty. Like so many of the directors who would go on to form what would retrospectively become known as the Japanese New Wave, Shinoda also started out as a junior AD, in this case at Shochiku where he felt himself stifled by the studio’s famously safe, inoffensive approach to filmmaking.

By the late ‘60s that approach was itself failing and so the studio began to take a few chances on new young directors including Shinoda who was afforded the opportunity to script and direct his first feature – One-way Ticket to Love (恋の片道切符, Koi no katamichi kippu). Studio mandated programme picture as it was, Shinoda still had to play by some of the rules – notably that the title song which is a Japanese cover of the 1959 Neil Sedaka hit needed to feature prominently. Shinoda does indeed showcase the song throughout the film though he also paints a dark and unforgiving picture of the burgeoning talent management industry whilst sympathising with those trapped in the underworld to which the effects of growing economic prosperity have yet to trickle down.

Down on his luck 20 year old alto-sax player Kenji Shirai (Kazuya Kosaka) has resorted to hanging around stations in Tokyo alongside a host of other unemployed artists trying to get picked up for a job and having little success. His luck changes when a young female talent fixer, Miss Yoshinaga (Yachiyo Otori), finds herself in need of an alto sax player with immediate effect. Kenji is elated to find work but somewhat troubled when the club is abruptly raided, giving him a taste of the precariousness of the underground club scene. Nevertheless, Yoshinaga hands him a card and tells him to come to her office tomorrow in case she has any more work for him.

On his way home, Kenji comes across a distressed woman crying her heart out dangerously near a high bridge. Fearing she is about to commit suicide, Kenji comforts her and then takes her home for the night before introducing her to Yoshinaga the next day in the hope that she may also have work for a young woman – she does, but as a nudie dancer. Mitsuko (Noriko Maki) reluctantly takes the job leaving Kenji conflicted but there’s more drama in both of their lives to come in the form of “The Japanese Elvis” Ueno (Masaaki Hirao), Mitsuko’s married ex-boyfriend Tajima, and an errant pistol belonging to Kenji’s petty yakuza roommate.

Although Shinoda was less noticeably political than many of the other directors of the time, his sympathy remains with those who feels themselves to be oppressed or have in someway been cast aside by an unforgiving world. Kenji in particular feels himself to be just such a person, remarking that the world is a cruel place in which people look after their own interests and are prepared to use and discard those less fortunate in order to get what they want. Describing himself and Mitsuko as nothing more than offerings fit for burning on the altar that is the post-war economy, Kenji’s sense of hopelessness is palpable. Despite having acted to rescue Mitsuko from her suicidal contemplation, he feels powerless to help her in any other way and honestly tells her so each time she comes to him for comfort or assistance. Though his earnestness has an honest quality in its determination not to deceive, it also has an air of cowardice as he refuses to even discourage the woman he loves from doing something he knows she will regret because he has already decided that resistance is futile.

Mitsuko, by contrast, finds herself entirely without agency. Betrayed by the man she loved on discovering that he was already married and had been stringing her along, she finds it difficult to adjust to living life alone. Consequently she finds herself wooed by the big idol star of the day, Ueno, and then swept into a studio scam in which the pair are tricked into a sexual relationship with dire consequences for both. Ueno, who sings the all important title song at several points throughout the film, might be in a more comfortable position than Kenji but he is no more free. The studio’s prime cash cow, Ueno is pimped out to his hoards of screaming teenage girls and denied anything like a private life outside of studio control. As the latest dancer at the club, Mitsuko is assured that she’s going out there a rookie and coming back a star but her fate, along with Ueno’s, is entirely in the hands of the managers who can make or break a career at will.

If the interpersonal drama fails to convince, Shinoda makes up for it with unusually dynamic and interesting cinematography much more like the youth movies Nikkatsu were making at the time than the usual Shochiku stateliness. Looking much more like the European New Wave, Shinoda makes fantastic use of tracking shots and unusual framing to draw attention to the isolation of his protagonists. The club set finale featuring the title song is a masterclass in tension as Kenji roams around the audience, caught among the crowd of screaming girls before pausing for an up close contemplation of Ueno which leads him to his final decision. A programme picture, but one in which Shinoda declared his stylistic intentions if not his scripting prowess. One-way Ticket to Love dazzles with visual flair but never captivates on anything other than a superficial level as its story of love frustrated by social inequality and controlling authority fails to deliver on the melancholy promise of the title. 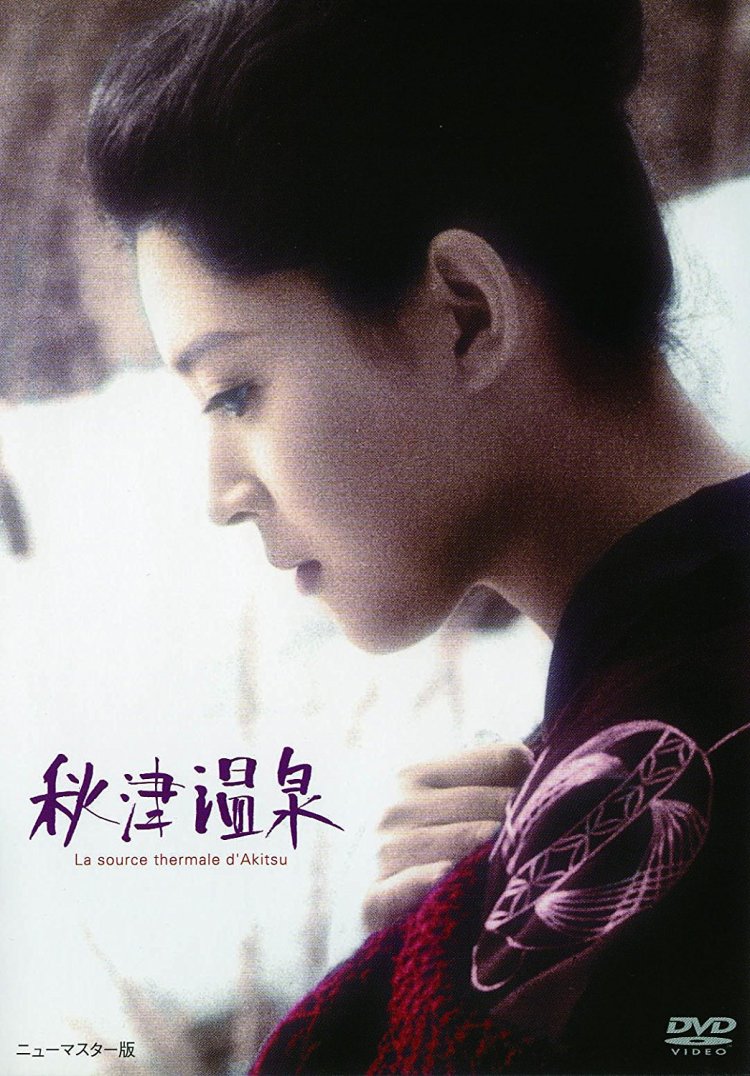 Kiju (Yoshishige) Yoshida is best remembered for his extraordinary run of avant-garde masterpieces in the late 1960s and early 1970s, but even he had to cut his teeth on Shochiku’s speciality genre – the romantic melodrama. Adapted from a best selling novel, Akitsu Springs (秋津温泉, Akitsu Onsen) is hardly an original tale in its doom laden reflection of the hopelessness and inertia of the post-war world as depicted in the frustrated love story of a self sacrificing woman and self destructive man, but Yoshida elevates the material through his characteristically beautiful compositions and full use of the particularly lush colour palate.

At the very end of the war, consumptive student Shusaku (Hiroyuki Nagato) finds his aunt’s house destroyed by aerial bombing. Attempting to find her but proving too ill to go on, Shusaku is taken to a nearby inn by a good samaritan where he first encounters the innkeeper’s daughter, Shinko (Mariko Okada). Despite her mother’s protestations, Shinko takes a shine to Shusaku and is determined to nurse him back to health. Shusaku, however, is a gloomy sort of boy and, ironically, longs only for death. Though the pair fall in love their youthful romance is forever tinged with darkness as Shusaku declares his love not with a ring but with a rope – he asks Shinko for that most classically theatrical of unions in proposing a double suicide.

Shinko agrees, but is not quite ready to die. In another dose of irony, Shinko’s tears of fear and despair on hearing the Emperor’s final wartime broadcast confirming his surrender inspire Shusaku to want to live but the pair are eventually separated. Reuniting and parting over and over again, their complicated love story repeats itself over a period of seventeen years but the painful spectre of the past refuses to allow either of them the freedom to move beyond Akitsu Springs.

Mariko Okada was only 29 in 1962, but she’d already worked with some of the best directors of the age including Ozu whose An Autumn Afternoon was released the same year, and Naruse in Floating Clouds which has something of a narrative similarity to Akitsu Springs. This prestige picture was her 100th screen appearance for which she also took a producer credit. Despite the obvious importance attached to both of these elements, the studio took a chance on a rookie director with only three films under his belt. Two years later Okada would become Yoshida’s wife and go on to star in some of his most important pictures including Eros + Massacre and Heroic Purgatory. At first glance her role here is a conventional one – a love lorn, melancholy woman unable to let the ghost of a failed romance die, but Okada’s work is extraordinary as Shinko travels from flighty teen to rueful middle aged woman, hollowed out and robbed of any sense of hope.

At Akitsu Springs time passes and it doesn’t all at once. Yoshida refuses to give us concrete demarcations, preferring to simply show a child being born and growing older or someone remarking on having been away. The inn becomes a kind of bubble with Shinko trapped inside, but Shusaku comes to regard the place as a temporary haven rather than a permanent home or place to make a life. For her everything real is at the spring, but for him everything at the spring is unreal – an unattainable paradise. She cannot leave, he cannot stay. Only for short periods are they able to indulge their romance, but the time always comes at which they must part again often swearing it will be for the last time, never knowing if it will.

Yoshida neatly bookends the relationship with announcements over loudspeakers as Shinko originally fails to understand the Emperor’s speech in which he remarks on enduring the unendurable, only to be prompted into later action by the banal drone of a train station tannoy. It’s almost as if their lives are being entirely dictated by outside forces, powerless drifters in the post-war world, condemned to a perpetual waiting sustained only by hopelessness.

Shinko may have convinced Shusaku to live but his growing successes only seem to deplete her. Wasting away at an inn she always claimed to hate, Shinko grows old while Shusaku grows bitter yet successful in the city. They move past and through each other, unable to connect or disconnect, yearning for the completion of something which consistently eludes them. Yoshida films the standard melodrama with appropriate theatricality but also with his beautifully composed framing as the lovers are divided by screen doors or captured in mirrors. Okada glows in the light of falling cherry blossoms, acknowledging the tragic and transitory character of love, but her final action is one which echoes the beginning of her suffering and finally declares an ending to an unendurable romance.