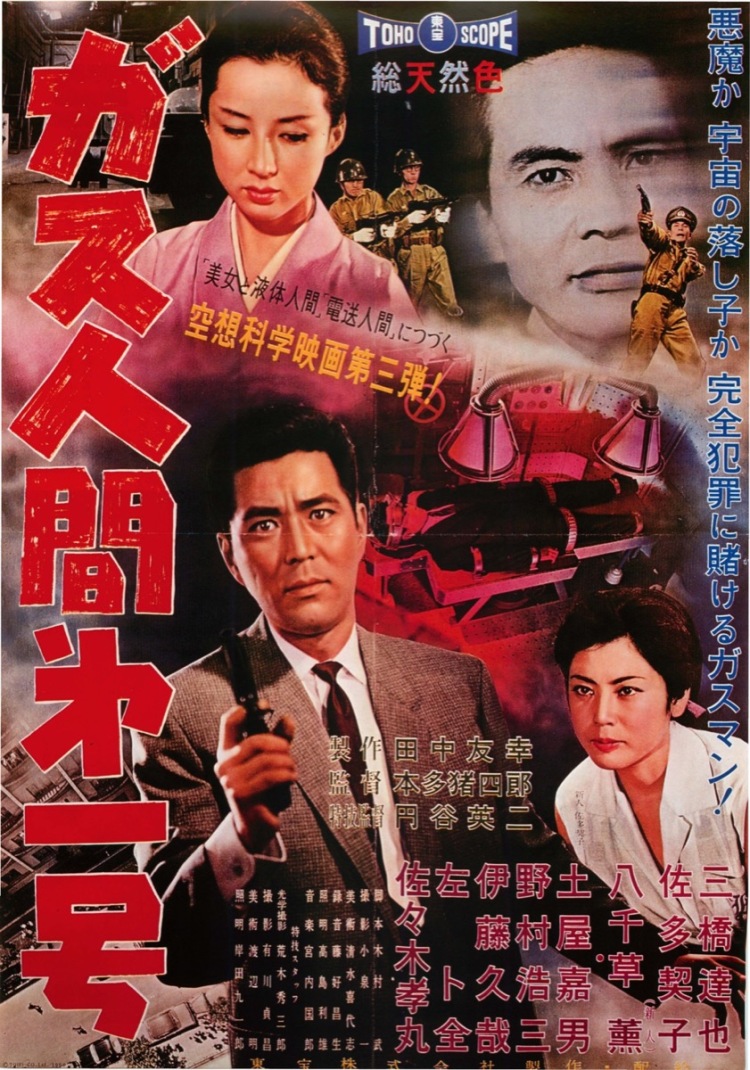 “The world is full of hysteria towards things they don’t understand” admits the strangely chatty “villain” at the centre of Ishiro Honda’s The Human Vapor (ガス人間第一号, Gas Ningen dai Ichi-go). Third in a loose trilogy of “mutant” films put out by Toho beginning with The H-Man and followed by The Secret of the Telegian, The Human Vapor is at once the most futuristic and the most traditional in that it’s no longer wartime guilt or nuclear anxiety which has corrupted our increasingly amoral hero but unwise ambition in which desperation to win the space race has produced a new and dangerous threat we may not be able to contain.

Honda opens with an exciting bank heist which on later consideration might not make much sense, filled as it is with shots of a faceless man pointing a gun at terrified staff while the vault doors open seemingly on their own. Earnest policeman Okamoto (Tatsuya Mihashi) is on the case, chasing a suspect car down a narrow country road only for it to crash and be discovered empty with no trace of the driver to be found. Okamoto’s feisty reporter girlfriend Kyoko (Keiko Sata) is dismayed to find out he has no leads, but later picks up on his mention of a buyo dancer, Fujichiyo (Kaoru Yachigusa), who lives near the scene and might have something to do with the case.

Chasing Fujichiyo takes Okamoto to a library, where he becomes further convinced she is in contact with the mysterious bank robber. A strange and isolated woman, Fujichiyo is apparently from a noble, wealthy family but lives alone in a small cottage with only a single male servant where she devotes herself entirely to perfecting the art of traditional Japanese dance. We discover that Fujichiyo has been in poor health, which is why she hasn’t given a public performance in some time. Okamoto posits that the bank robber is bankrolling her comeback, though he never seems to have much of an explanation why she would need him when she has access to her own resources.

He is however correct, though it seems Fujichiyo was not aware that the money was stolen otherwise she might have been more careful in using it. In a contrast with genre norms, honest cop Okamoto never falls for Fujichiyo but does become oddly invested in her sad love story while sparking with his cheerful reporter girlfriend who ends up doing much the same. In fact, Kyoko is the only one doing much investigating but largely finds herself having to do it in spite of the (generally useless) men around her, including an unpleasant younger colleague who mocks all her ideas but does nothing much of anything on his own.

In any case, smirking villain Mizuno (Yoshio Tsuchiya) later makes himself known to the police in a selfless gesture of love in order to clear Fujichiyo’s name and get her released from police custody. He does this by taking the police to a bank and demonstrating how he was able to get in the vault without a key which involves his curious ability to turn himself into a gas. When Fujichiyo is not released, he takes matters into his own hands and frees all the prisoners in the cells, but Fujichiyo refuses to leave, insisting that she has no intention of running away and prefers to stay until the police affirm her innocence by releasing her.

Mizuno’s intention to bypass the law is one of the many signifiers of his increasing danger, that now believes himself “above” the rest of humanity and therefore no longer subject to their laws. He later tells the police exactly that, sitting them down for a mini audience to explain himself during which he recounts his history as an SDF pilot discharged on a diagnosis of lung cancer after which he took the boring job in the library and fell in love with Fujichiyo. A shady doctor, Sano (Fuyuki Murakami), later approached him claiming to be working for Japan’s space programme and suggested that his fighter pilot background made him a perfect fit for becoming an astronaut. Mizuno agreed to participate in his research to “change the existence of the human body” in preparation for life in space, but when Sano’s weird experiments turned him into a “gas man”, the doctor committed suicide in horror leaving Mizuno just another lonely victim of a mad scientist.

Like many other “mutant” heroes, the change in Mizuno’s body has also changed his soul though his love for Fujichiyo remains unchanged. It seems he’s only committing these crimes to fund her ambition of performing traditional buyo dance on the contemporary stage, while she though obviously devoted to her art finds it difficult to accept the man that he’s become. He promises to give her the world, sacrificing anyone that gets in his way. She remains conflicted, not wanting to accept his offer if it involves that kind of cost, and defending him to her colleagues only with the rationale that he is “different from what they are accustomed to”. While some advise caution, that perhaps Mizuno is not as dangerous as they think despite already having killed and should be given the chance to reform, others take a harder line eventually opting to use a different kind of gas to counter him.

Kyoko pleads with Fujichiyo as one woman in love to another, trying to protect Okamoto while advising her to pull Mizuno back from the brink by cancelling her performance, but precisely because of the understanding that exists between them she cannot. Sadly, as many point out, no one is really interested in buyo dance – the only audience members in attendance are there for the drama and the possibility of seeing the gas man in action. “You and I have finally won” Mizuno tells Fujichiyo on completion of her dance, as if this performance was all that ever mattered to either of them. But their victory leaves them with nowhere else to go, and the world unready to accept the latent threat a gas man represents. Fujichiyo makes her choice, one perhaps informed by her art and her love, while the authorities can only wait outside for the vapours to disperse.