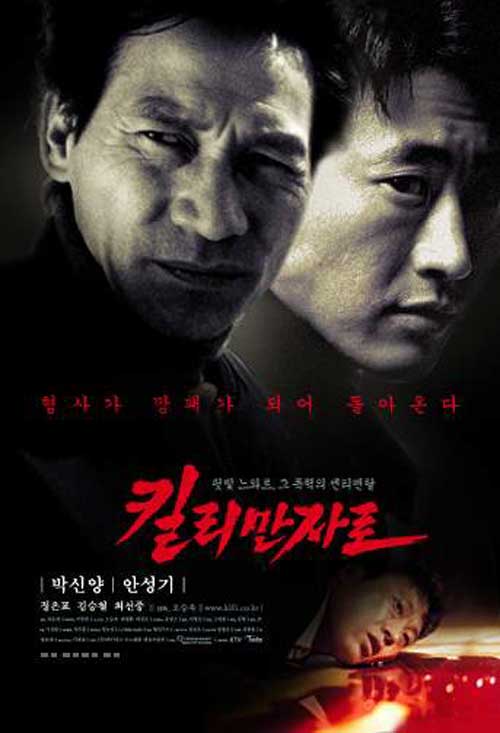 Mt. Kilimanjaro is the world’s tallest free-standing mountain. Oh Seung-ok’s debut, Kilimanjaro (킬리만자로), is not a climbing story, at least not in that sense, but a story of a man trying to conquer his own mountain without really knowing why. Twin brothers Hae-shik and Hae-chul are mirrors of each other, a perfect mix of light and dark, but when one makes a choice to choose the darkness, it throws the other into despair and confusion. A noir-ish tale of fragmented identities and fatalistic retribution, Oh’s world of tired gangsters and impossible dreams is as icy and unforgiving as the summit of its titular mountain, offering little more than lonely deaths and eternal regrets.

Policeman Hae-shik (Park Shin-Yang) drifts in and out of consciousness, tied up in a room by his twin brother, Hae-chul, with Hae-chul’s children looking on. Hae-chul murders his family and then shoots himself all while his brother is tied up and helpless, a policeman without recourse to the law. Taken to task by his colleagues who want to know how he could have allowed any of this to happen, if not as a brother than as a cop, Hae-shik has little to offer them by way of explanation. To add insult to injury, he is also under fire for unethical/incompetent investigation, and is taken off the case. Suspended pending an inquiry, Hae-shik goes back to his hometown but is immediately mistaken for Hae-chul and attacked by gangsters Hae-chul had pissed off before he left town and killed himself. Saved by local petty gangster Thunder (Ahn Sung-Ki), Hae-shik assumes Hae-chul’s identity and slips into the life of hopeless scheming which ultimately led to his brother’s ugly, violent death.

The film’s title is, apparently, slightly ironic in referring to the film’s setting of a small fishing village in the mountainous Gangwon-do Providence, known to some as “Korea’s Kilimanjaro”. Each of the men in this small town is trapped by its ongoing inertia and continual impossibility. They want to make something of themselves but have few outlets to do so – their dream is small, owning a family restaurant, but still it eludes them and they soon turn to desperate measures in opposing a local gangster in the hope of finally improving their circumstances.

Despite the seemingly tight bond of the men in Thunder’s mini gang – a mentally scarred ex-soldier known as “The Sergeant” (Jung Eun-pyo) and nerdy religious enthusiast knows as “The Evangelical” (Choi Seon-jung) rounding out Hae-chul’s goodhearted chancer, none of them has any clue that Hae-shik is not Hae-chul, or that Hae-chul and his family are dead. No one, except perhaps Thunder, is very happy to see him but even so Hae-shik quickly “reassumes” his place at Thunder’s side and takes over Hae-chul’s role in the gang’s scheming.

Hae-shik and Hae-chul had formed a perfect whole of contradictory qualities, each with their own degrees of light and darkness. Hae-chul had been the “good” brother who worked hard at home taking care of his parents while Hae-shik headed to university and a career in the city, never having visited his hometown since (in fact, no one seems to know or has already forgotten that Hae-chul even had a twin brother). Hae-shik’s “goodness” might be observed in his career as a law enforcer, but he’s clearly not among the list of model officers, and his home life also seems to be a failure. Hae-chul’s family might also have failed, and his shift to a life of petty crime provides its own darkness but living in this claustrophobic, impossible environment his crime is one of wanting something more than that his world ever had to offer him.

As might be expected, Thunder’s plans do not unfold as smoothly as hoped. Ineptitude and finally a mental implosion result in a near massacre costing innocent lives taken in a fury of misdirected vengeance. Despite wishing for a quiet life spent with friends on the beach, heroes die all alone, like mountain climbers lost on a snowy slope unsure whether to go up or down. Attempting to integrate his contradictions, become his brother as well as himself, Hae-shik reaches an impasse that is pure noir, finally meeting his end through a case of “mistaken identity”.