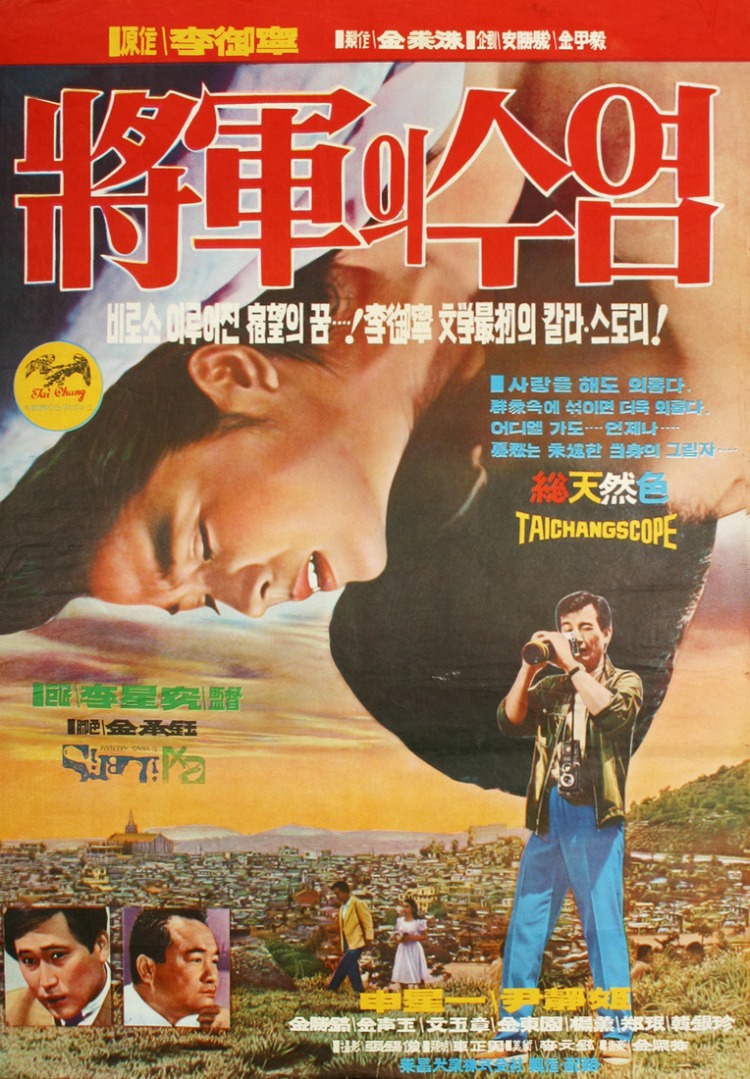 Broken dreams of the post-war society prove too much for one man to bear in Lee Seong-gu’s masterpiece of Korean Modernism – The General’s Mustache (장군의 수염 / 將軍의 수염, Janggun-ui Suyeom). Adapted from the novel by Lee O-young, Lee’s film co-opts the procedural but subtly subverts it, taking a cue from the film noir to turn it in on itself and ask if we can truly ever know another person, or if we simply conjure an image of everyone we know based on a collection of external observations gathered by ourselves and others. Our hero, Cheol-hun (Shin Seong-il), is a melancholy man who has chosen to live in a world of his own creation but when his shield of artifice is pierced by a spear of reality he can endure it no longer. Cheol-hun is dead, but who, if anyone, killed him and can we ever really understand why he died without his words to guide us?

Lee opens with a scream as Cheol-hun’s landlady discovers his body, draped half naked over his bed next to a stove with the safety cover removed. Concluding that carbon monoxide poisoning is likely the cause of death, the police find the panicked landlady suspicious but leave with three clues – a ladies’ stocking, a missing camera, and the scar on Cheol-hun’s forehead. The stocking takes them to Cheol-hun’s ex, who tells them that Cheol-hun gave his camera to a “nude model” which was perhaps a point of tension between the two, but not apparently the reason they decided to separate. The scar, ruining the detective’s (Kim Seung-ho) theory, turns out to be an old one – received in infancy when his exhausted mother (Han Eun-jin) dropped an iron on his head after a long day at the press.

After the testimony from Cheol-hun’s mother, the scar seems incidental but turns out to be anything but. Cheol-hun’s mother blames herself for his childhood injury (as any mother would) and has spent her life worrying about him, believing that the scar itself has been the cause of all his misfortune and sent him off on an unlucky path. From Cheol-hun’s sister (Kim Sin-jae) we learn that the family was once wealthy – local landowners who valued their “aristocratic” blood. After the war all that ended. The land was given back to the people, and Cheol-hun’s family were stripped of not only of their prestige but of their means of living. Nevertheless, Cheol-hun’s austere father refused to let his children play with the “commoners”, and so little Cheol-hun’s loneliness was born.

The testimony of Cheol-hun’s former boss reinforces the view that Cheol-hun was an eccentric loner, ill equipped for life in the “real” world. A former photojournalist, Cheol-hun lost his job as a result of a disastrous interview with a recently returned scholar who had enjoyed some minor success in America. The scholar, having been abroad five years, peppers his speech with random English and puts up a pretence of having forgotten his Korean. He complains that Korean kimchee is too spicy, and suggests that the key to improving the “backward” nation lies in “reforming” the cuisine. Cheol-hun, becoming ever more irritated, offers a few barbed comments but cannot contain himself when the kids, “John” and “Mary” who do not speak any Korean, arrive. American names, he points out, are usually associated with dogs and sex workers – why would you give them to your children if you plan to live in Korea? Needless to say, the interview is over.

Cheol-hun has now been characterised as a man who cannot read the air, but it’s time to hear from him too though it will have to be second hand. Shin-hye (Yoon Jeong-hee), the girlfriend, radically changing under testimony broadly agrees with this view of the man she loved but could no longer live with. Cheol-hun told her that he’d never been good with people and had no real friends save one in the army – interestingly enough a man descended from royalty, but that he died leaving Cheol-hun alone again with the lingering guilt that he was unable to save his only friend. His tragedy is that he yearns for true connection, to truly become one with another person, but he cannot achieve it. His life with Shin-hye crumbles not because of “reality” but because Shin-hye craves the real – to live in the real world where people bleed and hurt. She cannot live with Cheol-hun in his escapist paradise, but he cannot bear to leave it.

The title of the film comes from the book that Cheol-hun wanted to write. In the story, a victorious general fighting for “independence” returns to his “liberated” country. The general is dashing and brave and he has on his face the most magnificent mustache. A weedy reporter giddily asks him if he too might dare to grow such a wonderful mustache to which the general cooly assents. Before long a mustache craze sweeps the nation. Even those who cannot grow a mustache of their own have taken to wearing wigs, but our protagonist says no. He doesn’t want a moustache and refuses to wear one. He loses his job, but it remains open whether the fact of his not having a mustache (which no one forces him to have) or his melancholy loneliness in not wanting to have one and not understanding why everyone else does is the cause of all his suffering.

The quote at the film’s beginning, painted on Cheol-hun’s maddeningly crowded walls, reads “I refuse to, That’s why I’m alive”. Yet it isn’t quite a refusal so much as a lack of capacity. Cheol-hun’s boss had a point when he said that Cheol-hun was fundamentally unsuited to living in human society, as did Shin-hye when she described him as a lonely child in need of a guardian. If anything killed Cheol-hun, it was loneliness – a revelation which profoundly shakes the conviction of the veteran detective. After all, you can’t put handcuffs on spiritual isolation. The detective thinks of his family, and decides to take a watermelon home to share with them as means of reinforcing his own shallow connections but it’s clear that his conception of the world, of his abilities as a detective and the entire framework of his existence have been irreparably compromised by his investigation into the life and death of Kim Cheol-hun.

Partly a satirical swipe at post-war conformity, Lee’s film also subtly subverts a popular trope from the anti-communist genre in its apparent sympathy for landlords. Cheol-hun’s loneliness is posited as a direct result of his “fall” from his rightful position – the only friend he ever makes is also a fallen nobleman, and he struggles to adapt himself to the “classless” society of the “democratic” era. Yet it’s precisely these outdated ideas of “class” that have ruined his life in his father’s refusal to let him play with the other children. Cheol-hun retreats to a fantasy childhood world to avoid the harshness of modern life, but cannot escape his loneliness or his longing and when he realises Shin-hye is not the soulmate with whom he thought he could forge a new, perfectly isolated paradise, his entire existence becomes impossible.

Lee conjures a mosaic of Cheol-hun composed of the memories of those around him, gradually thickening in texture and finally coming into focus but always only a simulacrum of a man and not the man himself. Adopting a standard procedural narrative, Lee adds in extensive flashback and hypothetical dramatisations as the police investigate, switching to black and white for raw hypotheses and even breaking into elegantly drawn animation to recreate the surreal world of Cheol-hun’s putative novel. Dark and sad, The General’s Mustache seems to imply that there is no answer for solitude, that you can never really know another person fully, and that the loneliest man of all is the one born without a “mustache”, already naked of face in having no final mask to expose but finding that no one wants to see his true self only the one which is demanded he wear to appear just like everyone else.