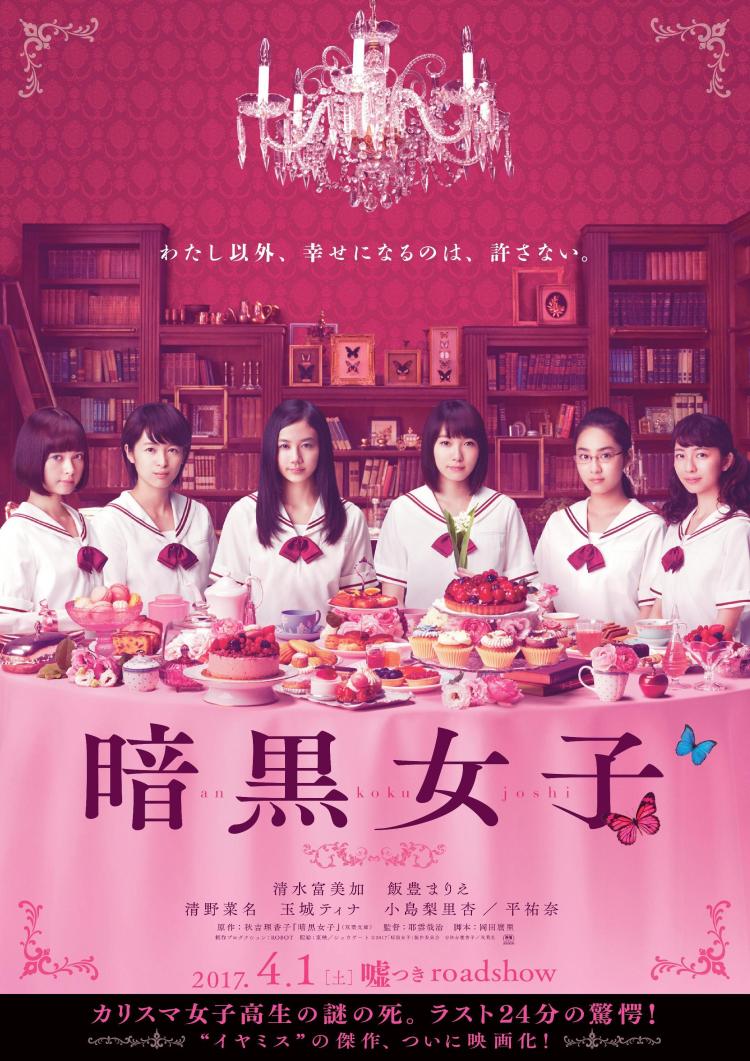 The world of teenage girls is often arcane and impenetrable to those outside of its extremely exclusive bubble, but The Dark Maidens (暗黒女子, Ankoku Joshi), Saiji Yakumo’s adaptation of the Rikako Akiyoshi novel, takes duplicity to new heights. When the school darling dies by falling (oh so beautifully) off a roof, speculation is rife and a rumour quickly spreads through the otherwise repressive educational environment that her very best friends are somehow to blame. Each implicates the others in turn, indulging their petty grudges and jealousies seemingly falling over themselves to express their closeness to the departed “sun”, but all is not quite as it seems and these collective acts of fantasy perhaps expose a little more than they were first intended to.

Itsumi Shiraishi (Marie Iitoyo) is dead. The daughter of the chairman at the elite all girls Catholic high school, Virgin Mary Academy, Itsumi was loved by all as the radiant sun whose innate goodness was the very embodiment of the school’s Christian aims. Immediately before the school holidays, the literature club – the most prestigious and exclusive of school associations of which Itsumi had been founder and president, are to meet one last time presided over by Itsumi’s best friend Sayuri (Fumika Shimizu). The girls will each read a story they have written “inspired” by Itsumi’s death, each of which attempts to tell her story from their perspective but ultimately paints themselves in a favourable light whilst casting doubt on the others.

The sole clue to the mystery is the lily of the valley Itsumi clutched to her breast, Snow White-like, as she lay pale and wan amid the flowers, elegantly arranged as always despite an apparently violent death. Quickly the girls run through a series of possible motives each with a degree of internal consistency but veering off in their own particular directions. Three of the girls awkwardly hint at their (unrequited?) love for their dead friend, insisting on a kind of ownership of her memory and of their rightful place at her side while the fourth descends into a xenophobic horror story casting the half-Bulgarian girl as a “vampire” come to suck the life out of the previously warm and vivacious Itsumi.

Yakumo delights in sending up the ever present girls school trope of repressed lesbianism and passionate friendships, but it remains true enough that the love card was apparently not one which Itsumi was afraid to play. The stories are all, in part at least, fabrications intended to cover up the various skeletons each of the girls has in their closets, but what they reveal is the series of manipulative machinations which underpins this seemingly sweet and elegant collection of conservative young ladies indulging a love for literature and the Christian virtues. Affairs, blackmail, inappropriate sexual relationships, forced abortions (at a Catholic school!), arson, all of these precede the presumed murder of Itsumi in a vast web of deception and illicit activity.

Teenage girls are often desperate to fit in, to be accepted by the “elite”, at the best of times but especially in an environment as otherwise repressive and exacting as an all girls Catholic high school. Adolescence is a time for trying on different personalities, but there can be something inherently plastic about the identity of a high school girl wanting in to the popular club. Hiding their true feelings, their fears and jealousies, the girls play the parts of they’ve been assigned – supporting cast in the tragic history of Itsumi, a girl betrayed who remained beautiful even in death. Then again, there might be some push back from those growing to resent their peripheral status and beginning to wonder if the spotlight was not theirs for the taking all along. A sun, however, will always need its lesser stars to demonstrate how much brighter it can shine.

Adapted from the novel by Rikako Akiyoshi, The Dark Maidens is a perfect mix of European drawing room mystery and gothic melodrama. Yakumo ups the camp fantastically with the girls sitting round a mysterious pot of stew in a room lit only by candlelight while a storm rages outside and each revelation is accompanied by crashing thunder and flashes of light. The setting is oppressive and sinister, but the only horror in the room is entirely human as each of these young women eagerly submits themselves to someone else’s control in fear of being, in some way, exposed, while those who seek to play the lead have to stoop to underhanded methods just to make “friends” who are really just minions rather than true believers. A sad and sorry state of affairs – who knew teenage cliques could be so, well, dark?

Screened as part of the Japan Foundation Touring Film Programme 2018.