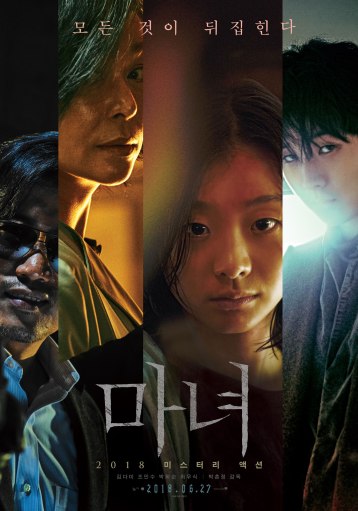 There’s probably something quite profound to be said about the folkloric tradition of the foundling child and untold destiny, that exiled nobility can salvage the best qualities of the place they escaped in a rural paradise before returning to make their restoration. Superheroes do indeed seem to find frequent refuge in the wholesome plains of farm country where the salt of the Earth raises them into upstanding people with the right kind of values to couple with their “unnatural” powers to enable them to “save the world” in ways both literal and metaphorical. Perhaps there is darkness in that idea too, that we need such people to save us rather learning to save ourselves or that we secretly long to believe in our latent specialness and hidden destiny, and of course those rightful values may also be inherently conservative in that they aim to preserve a particular vision of “goodness”. In any case, the heroine of Park Hoon-jung’s The Witch: Part. 1. The Subversion (마녀, Manyeo) is not so much out to save the world as engaged in a war to save herself and that particular vision of goodness she’s been gifted by good people (or, then again, perhaps not).

Park begins with blood as a little girl manages to escape a massacre at some kind of shady facility before passing out in front of an idyllic farmstead where she is eventually taken in and nursed back to health by a kindly older couple, the Koos. 10 years pass. The little girl is now the teenage Koo Ja-yoon (Kim Da-mi) and an archetypal farm girl albeit an extraordinarily pretty one with straight A grades and fierce love for her now struggling adoptive parents. With the farming industry in crisis and Mrs. Koo suffering with Alzheimer’s, Ja-yoon finds herself bullied into taking part in a televised singing competition by her boisterous best friend Myung-hee (Go Min-si), which is not the best idea if you’re trying to hide from shady government forces. Sure enough, the past begins to resurface leaving Ja-yoon with a series of difficult choices.

Like many other recent Korean action dramas with female leads, The Witch steps back into the familiar territory of “good” mothers and “bad” while uncomfortably asking if childhood corruption can be cured by love alone. Living as Ja-yoon, the unnamed little girl has been reset. Given a “normal” childhood, she seems to have become a “normal”, perhaps ideal, young woman who does well at school, is confident and self possessed, and dearly loves her family and friends. When we finally meet the woman responsible for her corruption, Professor Baek (Jo Min-su) who presents herself again as a maternal figure and Ja-yoon’s “creator”, we learn that Ja-yoon is a creature born of icy violence, raised without compassion or love for no greater purpose than destruction.

Mr. Koo (Choi Jung-woo), perhaps understanding Ja-yoon a little better than she understands herself, often tells her not to go out “like that” which seems like slightly archaic paternal sexism but is also an attempt to soften those “male” instincts towards violence which are so much a part of her early life and of her essential nature. Frightened by her “unnatural” cruelty, Mr. Koo wasn’t sure if they should keep Ja-yoon with them but his wife (Oh Mi-hee) disagreed, believing they could heal her by raising her in love. The choice Ja-yoon faces is whether to embrace her persona as Koo Ja-yoon as raised by her adoptive parents, or the psychopathic killer which lies underneath.

Park leaves the dilemma very much in the air with “Ja-yoon” a vacillating cypher whose internal divisions seem to become ever more stark as she begins to wall off her various personas. “The Witch”, as the title implies, may itself have its misogynistic overtones in pointing directly at Ja-yoon’s transgressive femininity, both innocent farm girl and unstoppable killing machine, but as the subtitle hints Ja-yoon is also attempting to subvert herself in service of a greater mission which (for the moment) remains unclear. Park opens the door to a sequel in which subversion might not be the aim, sending Ja-yoon further along the path of dark self exploration which promises still more violence and mayhem before her bloody work is done.

The Witch: Part 1. The Subversion is released on Digital HD in the UK on April 22nd courtesy of Signature Entertainment.