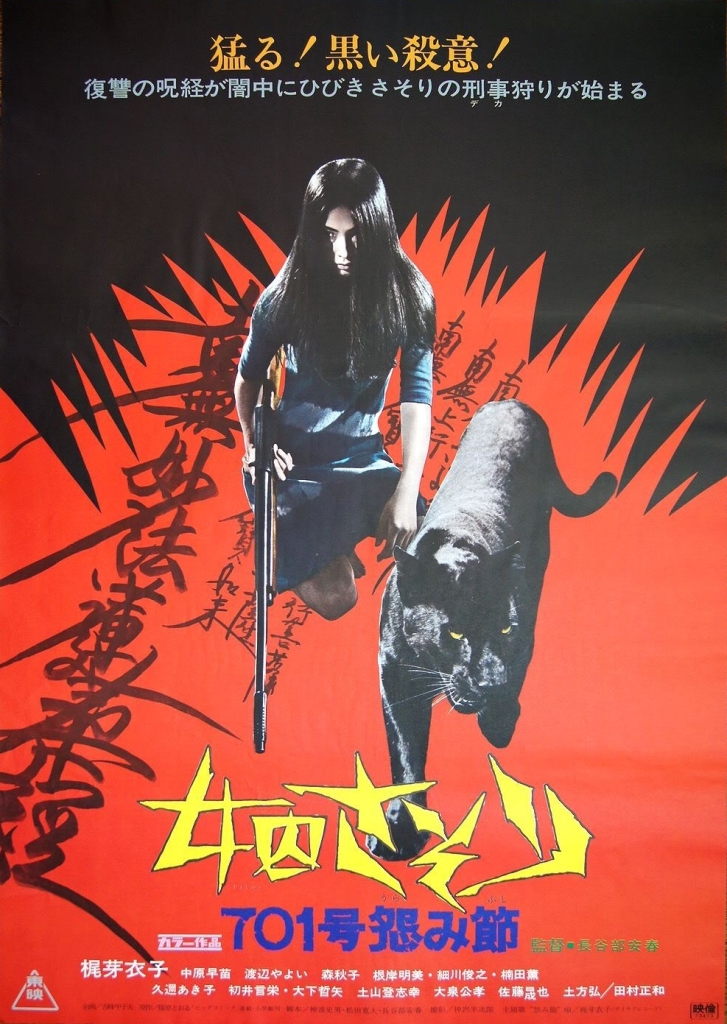 The saga seemed complete with the end of Beast Stable but inevitably Matsu returns in the bonus instalment, Female Prisoner Scorpion: #701’s Grudge Song (女囚さそり 701号怨み節, Joshu Sasori – 701 Go Urami Bushi). Original director of the series Shunya Ito agreed that the ballad of Matsu was sung through, and so Yasuharu Hasebe reteams with star Meiko Kaji after their previous collaborations on Retaliation and the Stray Cat Rock series during their time at Nikkatsu. Hasebe’s style is the polar opposite of Ito’s arthouse inspired painterly majesty and heavily favours the groovy, ‘70s youth inspired aesthetic he employed in the Stray Cat Rock series. Coming as it does after Ito’s genre rocking visual tour-de-force, Grudge Song can’t help feeling a little regressive and a reminder of what a considered cash grab this fourth instalment really is but that isn’t to deny the fact that it can prove an enjoyable, genre skewing, effort when considered in isolation.

The end of Beast Song told us that Female Prisoner Scorpion served her sentence, was released and disappeared into the ether like the legendary creature she was. However, Grudge Song provides another episode to her history and begins with Matsu (Meiko Kaji) being re-arrested by police during someone else’s wedding (you have to feel sorry for the happy couple – could the police not have done this outside at least?). She fights them off in grand fashion and manages to escape though is gravely injured and not able to run very far. Luckily she is found by a damaged former protester working at a cabaret club who helps her hide out from the police. Soon the pair enter into a kind of romance but it’s not long before Matsu has some names to add to that ever increasing grudge list.

Along with the change of director comes a slight refocusing. Both the original trilogy and this fourth instalment have definite political undercurrents but Grudge Song allows these to be more overt with its constant references to the student protests of the late ‘60s and ’70s as well as to police corruption and brutality. Matsu’s ally and sometime lover, Kudo (Masakazu Tamura), had been a prominent protester picked up and repeatedly tortured by police leaving him with both physical and mental scarring. Obviously distrustful of authority but also made fearful, Kudo has been keeping his head down until he finds a kindred spirit in Matsu and decides to fight back.

The enemy here is the police – as it was to a degree in some of the other films, but Matsu’s concerns are playing second fiddle to her male saviour’s psychological traumas. This is the first film where Matsu has any kind of male help, and she’s essentially in an assisting role as Kudo attempts to defend her from the police (her injuries meaning she can’t exert the same kind of preternatural power as in the other instalments). There may be a kind of spiritual connection between Matsu and Kudo but the fact that she trusts him so quickly is strange given her behaviour throughout the series, though perhaps she has little choice given her physical condition. This is also the first time where Matsu allows an innocent woman to be killed in front of her – ironically another victim of male violence whose life is lost through no fault of her own. The other Matsu would at least find this upsetting, but this new Matsu who’s now more of an accomplice to a borderline terrorist protest cell consisting of one male member, is entirely indifferent.

Though Hasebe mimics some of Ito’s cinematography notably in the opening and his iconography of “Scorpion”, he abandons his stylistic concerns in favour of something very much more directly contemporary. In keeping with his work on the very groovy, youth orientated Stray Cat Rock movies, Hasebe turns Female Prisoner Scorpion into a standard ‘70s exploitation pic complete with gratuitous lesbianism, nudity, and random violence. Zooms, whip pans, and anarchic camera action are accompanied by jazzy electric guitar and a stoner vibe that is designed to appeal to the youth of the day but appears hopelessly dated now unlike Ito’s approach which is still of its era but manages to take on a timeless quality. As an example of ‘70s exploration cinema, Grudge Song pays its dues but as a Female Prisoner Scorpion movie, it falls far short of its predecessors.

Grudge Song marked the last outing for Kaji as the titular Scorpion, though this Matsu is not the Matsu of the rest of the series. Hasebe doesn’t seem so attached to the cult of Scorpion and more or less reboots her for a fairly straightforward genre affair which lacks the subtle intelligence of Ito’s vision. Still, taken alone Grudge Song is not without its charms though it loses the feminist edge of the rest of the series and recasts its heroine as a bit player in a game of revenge against the authorities in the name of vengeance for the death of the student movement.