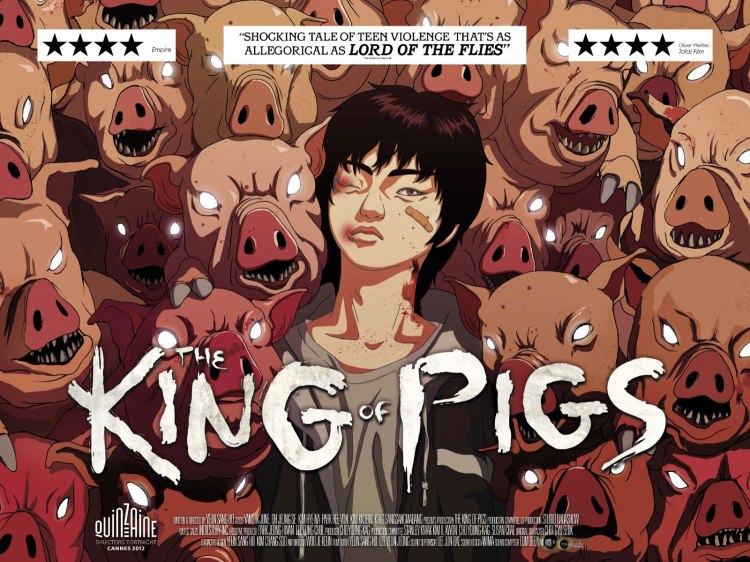 First Published on UK Anime Network in May 2013

Korea has a long tradition of animation but is perhaps more famous overseas for providing technical services to higher profile productions from other countries. The King of Pigs is the first feature length Korean animation to be shown at Cannes and has been screened at several other film festivals worldwide, picking up a few awards along the way too. Korean live action cinema of recent times has earned itself a reputation for being unafraid of violence and difficult subject matters – an ethos which appears to have directly penetrated into King of Pigs which nothing if not extremely bleak.

As the film begins, failed businessman Kyung-min weeps naked in a shower while the contorted face of a strangled woman lingers hauntingly in the next room. He makes a phone call hoping to track down an old childhood friend – perhaps because he feels he’s the only one who can help him understand what he’s done or because he feels somehow as if this person represents a fracture point in his life where everything started to go wrong. This long lost friend, Jong-suk, seems to be in a similarly dismal situation – an under appreciated ghost writer who’s constantly berated for writing unemotional prose, he returns home to beat his wife after accusing her of having an affair (which turns out to be doubly wrong as she’d been meeting with a publisher about Jong-suk’s own novel). The two men meet and talk over a traumatic period in their childhood when their only protector was another boy, Chul – self titled King of Pigs.

The school system was divided rigidly along lines of economic/social status and academic prowess and neither Kyung-min nor Jong-suk found themselves in the elite camp. Beaten, humiliated and molested the boys appear to have no recourse except to grin and bear it – even the teachers and authorities appear complicit in this unofficial caste system. That is until Chul dares to fight back, violently, on behalf of not only himself but all the other ‘pigs’ too. The three end up becoming a team bound by mutual suffering much more than friendship or human emotion. It takes more than one boy to destroy a system though and circumstances conspire to ruin whatever headway they might have made. These times will affect each boy more than he could ever have guessed and these changes will not be for the better.

The King of Pigs is certainly not an optimistic film. Though it seeks to depict a corrupt system based on arbitrary and unfair principles, perpetuated by the adults in charge and those trapped inside it, it has to be said that by the time we meet the young counterparts none of them is especially sympathetic. It’s an unfortunate part of the film’s message but the fact that both the young boys are so passive and complicit in their own degradation makes it very difficult to build up a sense of sympathy for them. You might think then that Chul would be the natural hero of this piece as the self appointed ‘savior’ of the hopeless cases but his manifesto rapidly turns so repellant that you can’t get behind him either. What you’re left with is a group of misogynistic ‘little men’ who in turn transfer the frustration they feel with their own sense of inferiority on to those they believe to be even weaker than themselves. The film tries to imply that the grown up failures of these men are a direct consequence of a broken school system, yet as we meet them already in the system rather than as totally innocent children, it’s not possible to follow this line of reasoning as the boys appear deeply unpleasant from the offset.

Unfortunately, another thing the film isn’t is subtle. The director really wants to hammer home his message about the socio-economic unfairness that seems to penetrate every area of society and prevent any sort of social mobility, but often it’s akin to being hit over the head with the same idea repeatedly several times over the course of the film. It is extremely violent in a deeply uncomfortable way to the extent that you could call this a ‘nasty’ film – the scene of animal cruelty alone feels both like an underdeveloped cliché and a thinly veiled attempt at shock value. In short, the film constantly undermines itself by shooting straight for the extreme where a more nuanced approach may have made its subject matter all the more powerful.

As it stands, it’s quite difficult to recommend The King of Pigs either as an entertainment piece or as a serious art film seeking to examine Korea’s attitudes to social class. The film was made on an independent basis and some may find its aesthetic a little basic in terms of animation quality yet it does have some interesting directorial ideas and composition. Though it ultimately fails, the film does deserve some praise for tackling such a difficult subject matter – genuinely adult contemporary animation can often be difficult to find. However it’s partly its desire to be ‘adult’ that destroys its ability to be taken seriously – by skewing towards the ‘extreme’ audience who may only be interested in the violence rather the problems that underly it, The King of Pigs risks been seen as a schlocky horror story rather than a parable about some very real social issues.

Available now in the UK from Terracotta Distribution.

Review of Yeon Sang-ho’s second and much improved animated feature The Fake.