Love across the class divide threatens to overthrow the social order. Inspired by the classic folktale Bancho Sarayashiki, Ghost in the Well (怪談番町皿屋敷, Kaidan Bancho Sarayashiki) is indeed the story of a haunting though perhaps not altogether of the kind you might be expecting. This is a tale of romance, but also one of impossible love in which the only possible union is in death. The pure love of a servant girl is deemed incompatible with the oppressive world of samurai honour, and so she must die, but her lord cannot survive it. He cannot reconcile himself to having chosen to preserve his honour, his status, his lineage at the cost of her life and his love.

Rowdy samurai Harima (Chiyonosuke Azuma) loves making trouble in the streets. As the lord’s bannerman he knows he has a degree of status and likes to throw his weight around in the yoshiwara, much to the lord’s consternation. Harima has also taken a fancy to one of his maids, Okiku (Hibari Misora), who continues to reject his advances despite returning his affections because she knows the class difference makes a legitimate relationship between them impossible and a dalliance with her lord means losing the opportunity to marry anyone else. Harima tells her that there’s no such thing as status when it comes to love and that he doesn’t think of her as a passing infatuation. Eventually Okiku gives in and a kind of promise is made between them.

Nevertheless, it’s a promise which can’t be kept. The Aoyama family is in trouble and the obvious answer is to make a good match for Harima that will restore both status and wealth. When one of Harima’s friends is ordered to commit seppuku for the exact same petty punk antics Harima gets up to all the time matters come to a crunch. To keep him safe, Harima’s uncle arranges a marriage with an influential family. Harima tries to refuse but he too is more or less powerless even if he weren’t torn between the obligation to his samurai code and his illicit love for servant girl whom he would never be permitted to make his wife. To cement the match, Harima’s uncle has prepared 10 precious plates as a dowry, but Okiku, catching sight of Harima’s bride-to-be, drops one and breaks it in two. Her fate is sealed. Harima draws his sword on her and she backs away, eventually falling into the well and dying there.

The broken plate is, of course, a symbol of their broken covenant but also of Okiku’s shattered dreams as she watches a beautiful but haughty woman steal away her last hope of happiness solely through the accident of noble birth. As her friend tells her, a commoner cannot become the wife of a samurai and all Okiku can do is resign herself to her unhappy fate. Having broken the plate, however, all is lost. The men of the household admit their responsibility for entrusting the entirety of their future to a mere slip of a girl in the middle of intense heartbreak, but Okiku cannot go unpunished and Harima must claim his new life by destroying his past love.

Harima does what he’s supposed to do, if in passion and half by accident. Yet the marriage remains broken, the family in jeopardy, and Harima without hope of future. The ghost of Okiku, real or imagined, haunts him while he remains guilt ridden and filled with regrets. Despite his rowdiness and manly pride, he chose his samurai honour and condemned his one true love to a lonely death. Her love has, however, survived and resurrected her not as a demon of vengeance come to lead him to his doom but as a lovelorn woman keen to remind him of the promise he made and broke but which might be mended.

Harima pays for his transgressions, though more as a mischievous samurai who allowed his over inflated ego to convince him he had the right to oppress his fellow retainers than as a man who caused the death of an innocent woman, first by corrupting her and then by the same rigidity which has led to his present predicament. There can be no “love” in a such a society, let alone the love of a bannerman and a servant girl. Theirs is a blood wedding, uniting them in death, consumed by the impossibilities of the samurai era. At only 45 minutes, Ghost in the Well is perhaps a slight retelling of the tale and somewhat in imbalanced in its presentation of the fates of the two lovers but is nevertheless a refreshingly romantic take on an often dark story in which a scorned woman’s vengeance is reframed as a powerful condemnation of an oppressive society. 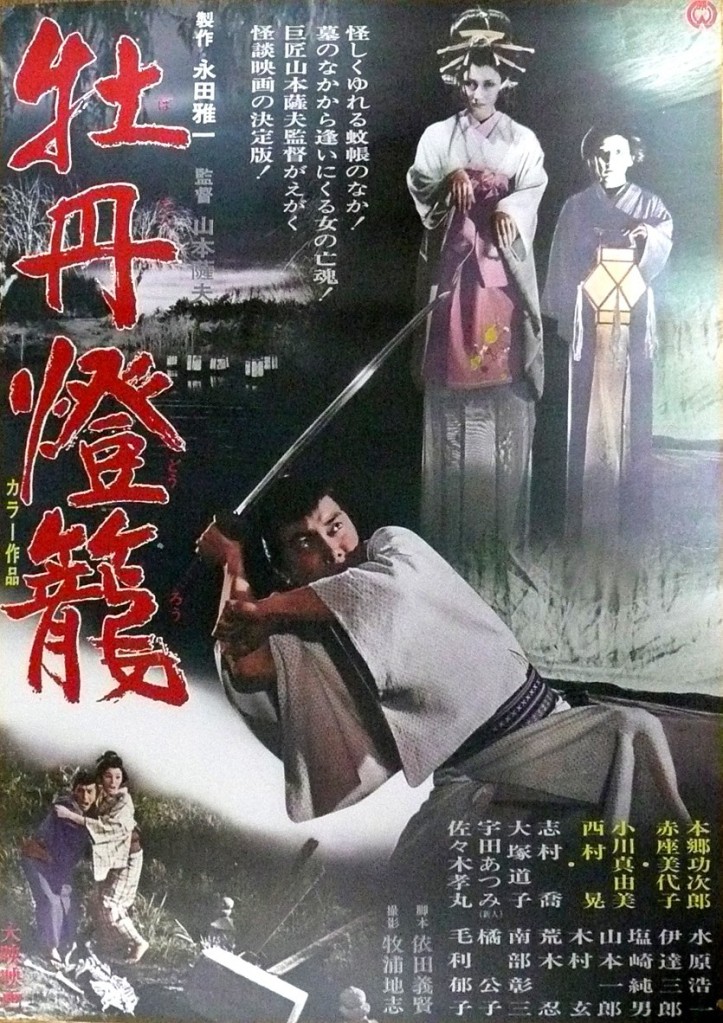 The Peony Lantern (牡丹燈籠, Kaidan Botan Doro) has gone by many different names in its English version – The Bride from Hades, The Haunted Lantern, Ghost Beauty, and My Bride is a Ghost among various others, but whatever the title of the tale it remains one of the best known ghost stories of Japan. Originally inspired by a Chinese legend, the story was adapted and included in a popular Edo era collection of supernatural tales, Otogi Boko (Hand Puppets), removing much of the original Buddhist morality tale in the process. In the late 19th century, the Peony Lantern also became one of the earliest standard rakugo texts and was then collected and translated by Lafcadio Hearn though he drew his inspiration from a popular kabuki version. As is often the case, it is Hearn’s version which has become the most common.

The central figure in Satsuo Yamamoto’s 1968 prestige picture for Daiei is the third son of a samurai household, Shinzaburo (Kojiro Hongo). This is the first Obon festival since his older brother died leaving a young widow behind him. Kiku, his sister-in-law, is becoming a problem for the clan as her birth family have not called her back and it’s embarrassing for them to have an unattached woman of age wasting away at home. Accordingly, they think the best option is for Shinzaburo to marry his brother’s wife. Shinzaburo is having none of it. A progressive kind of samurai, he spends his time teaching poor children to read and even dreams of opening a school one day but his family most definitely do not approve and see this marriage as an opportunity to put an end to his improper ideas about social justice.

Heading back to the village under a cloud, Shinzaburo helps one of the children push two of the lanterns which had got stuck by the shore out onto the lake. Suddenly two lantern carrying women appear from nowhere and thank him. Later, the same two women arrive at Shinzaburo’s home to thank him again and relate a sad tale – the older woman, Oyone (Michiko Otsuka), is a servant of the younger one, Otsuyu (Miyoko Akaza), and they’ve come from the red light district. Otsuyu apparently hailed from a samurai background but was tricked and forced into the yoshiwara after her father was abandoned by his clan and subsequently fell ill. She is still a virgin but has attracted the attentions of an older wealthy client and is expected to acquiesce to his desires after the Bon festival is over. Shinzaburo seems like such a nice guy that she’d much prefer to stay with him, at least until Bon is over. There is one quite important detail which Oyone and Otsuyu have omitted from their history.

Despite it being Bon – the Japanese summer festival in which the dead return to the land of the living, Shinzaburo never stops to think about where these two women might have come from. Truth be told, he’s in something of a dark place what with the current familial discord which might see him either exiled from his clan (which would entail the loss of his living as well as his status), or an arranged marriage to a woman he doesn’t love who also was previously married to his brother. The villagers are very fond of Shinzaburo and grateful for his efforts with the children. Should they lose him, they would never find a replacement and the children would remain uneducated.

Despite having contributed to the war effort by making a series of propaganda films, director Satsuo Yamamoto was an openly committed communist and though Peony Lantern is in no way overtly political or at least not in the same sense as some of his other work, it nevertheless manages to work in the cruelty and indifference of feudal elites towards the ordinary people below them. This is a theme which is common in kaidan/horror films from this era and particularly from Daiei, but Shinzaburo is something of an exception to the rule as he stems from the samurai order himself. His family find his commitment to educating the peasantry at best eccentric and at worst embarrassing though Shinzaburo is determined to live in a more altruistic way than his rigid, tradition bound relatives.

This does leave him feeling slightly adrift as he’s at odds with both the samurai class of his birth but also with the villagers who see him as a teacher and someone to look up to, but definitely not as one of them. When the pretty Otsuyu and her maid arrive with a tragic story also involving the harshness of the samurai class, it’s primed to catch Shinzaburo’s attention and lonely as he is perhaps he doesn’t quite stop to ask questions when offered the opportunity to play kindly saviour to a sad young woman about to be robbed of her right to choose her own destiny (much as he will be, only worse). His relations with Otsuyu leave him feeling progressively weaker but still he can’t seem to bring himself to the decision to send her away entirely.

Perhaps it’s death Shinzaburo craved all along, an end to his tormented existence and the loneliness that comes of being caught between two social strata in a strictly controlled class hierarchy. The two ghosts are not malicious, they’ve come craving love and kind words from an honest man and hit the jackpot with the softhearted Shinzaburo. Tragic as it all is, perhaps everyone ultimately got what they wanted – an end to the eternal loneliness of having been cast out from one world and unable to fully embrace another.

Despite the emphasis on the indifference of the samurai class, the poor aren’t all saints either as seen in the feckless servant character, Banzo (Ko Nishimura), who begins as comic relief but ends up very much not. He is the first to witness the ghostly nature of the two visitors and to try and save Shinzaburo from their clutches, but when his wife comes home for her Obon holiday everything changes. Banzo’s wife orders him to blackmail the ghosts for money which they eventually get by digging up a neighbouring grave. Little to they know that it’s not supernatural forces which they will need to be worrying about in the future and they will pay a heavy price for their greed.

Yamamoto captures the eeriness of his undead visitors perfectly as they float and glide across the screen. The first scene in which Banzo peeks in on them with Shinzaburo and sees them as they really are is truly shocking as is the raw power with which Oyone later confronts him. Switching effortlessly between nervous, melancholy women seemingly caught in a more Earthly kind of purgatory, and etherial escapees from the underworld, Otsuyu and Oyone continually carry a kind of death-tinged strangeness around with them. A beautifully filmed, supremely creepy adaptation of the classic story, Yamamoto’s Peony Lantern is a suitably macabre, gothic affair which is entirley unafraid to explore the essential darkness of the tale at hand.