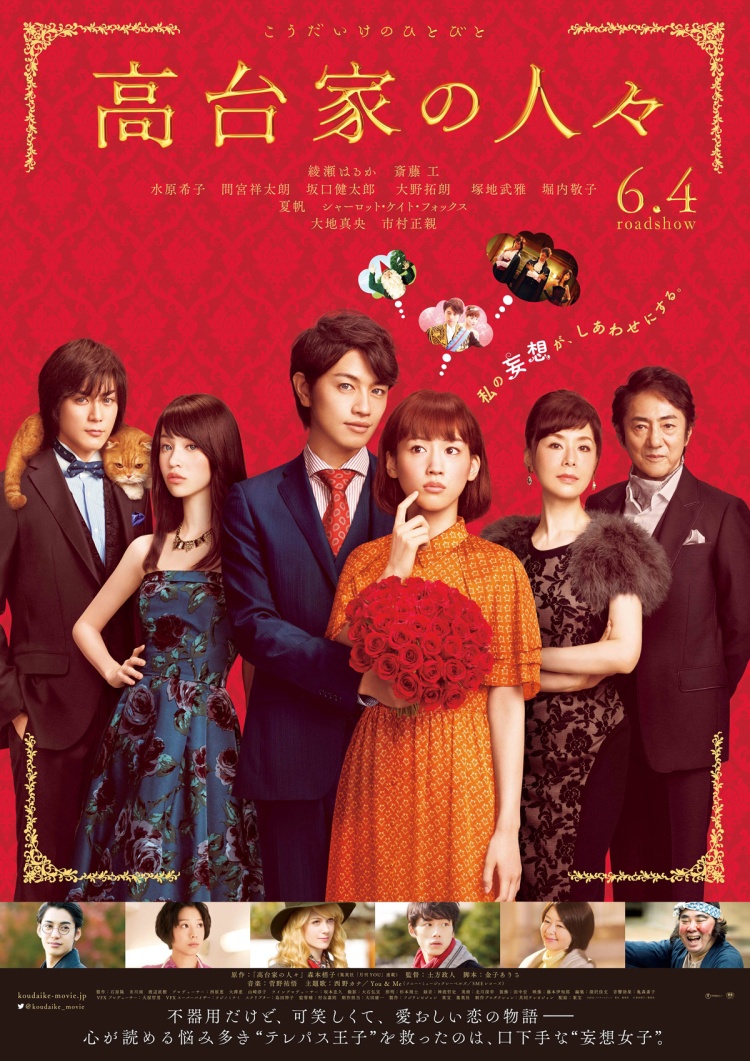 Fear of “broadcasting” is a classic symptom of psychosis, but supposing there really was someone who could hear all your thoughts as clearly as if you’d spoken them aloud, how would that make you feel? The shy daydreamer at the centre of The Kodai Family (高台家の人々, Kodaike no Hitobito) is about to find out as she becomes embroiled in a very real fairytale with a handsome prince whose lifelong ability to read minds has made him wary of trying to form genuine connections with ordinary people. Walls come down only to jump back up again when the full implications become apparent but there are taller walls to climb than that of discomfort with intimacy including snobby mothers and class based insecurities.

29-year-old Kie (Haruka Ayase) has a dull job as a regular OL in the successful Kodai company. A self-confessed shy person who finds it difficult to talk, Kei spends most of her time alone though she does have a few friends at work. Though Kei’s exterior life may appear dull she has a rich, even overactive imagination which she uses to entertain herself by heading off into wild flights of fancy guided only by a friendly (?) gnome.

Kei’s life begins to change when the oldest son of the Kodai family returns to the office after studying abroad. Mitsumasa (Takumi Saito) is a handsome, if sad-looking man who quickly has all of the office in a flurry of excitement thanks to his dashing good looks and confident stride. Mitsumasa, however, has a secret – the ability to read other people’s thoughts inherited from his British grandmother, Anne. Whilst walking down the corridor and trying to ignore the lewd and avaricious thoughts of some of the ladies (and the worried ones of some of the men now fearing more than one kind of competition), Mitsumasa is treated to one of Kei’s amusing fantasies and is quickly smitten.

For Kei who finds voicing her true feelings difficult, Mitsumasa’s ability seems like the perfect solution. Finally, someone who will just understand her without the need for conversation. However, what Kei hasn’t considered is that a deeper level of intimacy is being asked of her than she’d previously anticipated. From the merely embarrassing to the tactless and tasteless, it is no longer possible to withhold any part of herself other than by an exhausting process of trying to close her mind down completely. Mitsumasa is used to this particular phenomenon in which his enhanced powers of communication only result in additional barriers to connection. Somewhat closed off himself, resigned to the fact he’s going to “overhear” things he’d rather not know, Mitsumasa has made a point of keeping himself aloof from ordinary people who, once they know about his abilities, find him suspicious and threatening.

Yet Mitsumasa’s telepathic powers are not the only obstruction in this fairytale love story. Kei already can’t quite believe what’s happening is real and struggles with the idea someone like Mitsumasa might seriously be interested in her. Though Mitsumasa’s brother (Shotaro Mamiya) and sister (Kiko Mizuhara), who share his ability, are broadly supportive (and equally entertained by Kei’s innocent and quirky flights of fancy), his mother (Mao Daichi) is anything but. Kei’s prospective mother-in-law starts as she means to go on by mistaking Kei for a new maid and then proceeding to further erode her confidence by pointing out that she knows nothing about this upper class world of balls and tennis and horse riding.

When it all becomes too much, Kei does what she always does – retreats to safer ground. Papering over her cowardice with the weak justification that she thinks she’ll only make Mitsumasa miserable, Kei backs away from the idea of baring her whole, unfiltered soul even if she knows it will cost her the man she loves and the ending to her real life fairytale.

Though charming enough and filled with interesting manga-inspired effects, Kodai Family never makes the most of its interesting premise, falling back on standard romantic comedy tropes from parental disapproval to predictable misunderstandings. The irony is that Mitsumasa and his siblings are so busy listening to the thoughts of others that they often can’t hear their own and are so deep in denial that they need a third-party (telepathic or not) to push them into realising how it is they really feel. This is a world of double insulation, in which the walls are both thick and thin, but there is a way a through for those brave enough to kick them down by baring all for love, snobby mothers be damned.