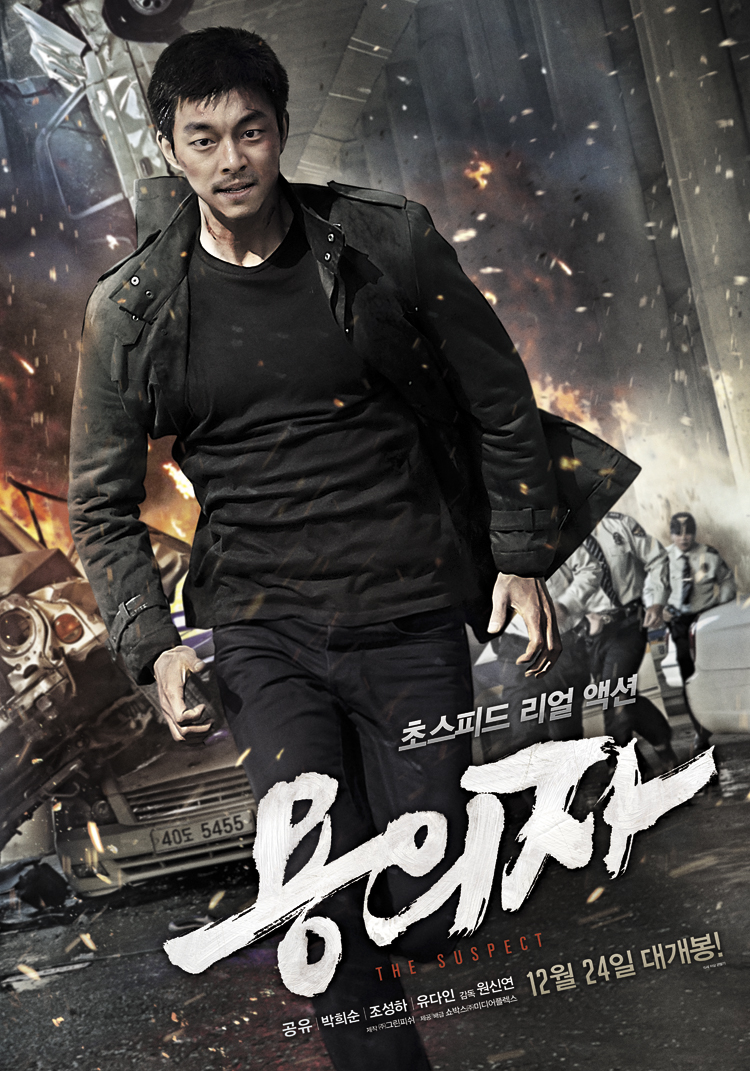 North Koreans have become the go to bad guys recently, and so North Korean spies have become the instigators of fear and paranoia in many a contemporary political thriller. The Suspect (용의자, Yonguija), however, is quick to point the finger at a larger evil – personal greed, dodgy morals, and the all powerful reach of global corporations. Opting for a high octane action fest rather than a convoluted plot structure, Won’s approach is (mostly) an uncomplicated one as a wronged man pursues his revenge or redemption with no thought for his own future, only to be presented with the unexpected offering of one anyway alongside the equally unexpected bonus of exposing an international conspiracy.

Ji Dong-cheol (Gong Yoo) is former top North Korean asset now defected to the South and working as a driver for an important CEO. His boss thinks he ought to just go home, but Ji has a mission – he’s looking for a former friend, also defected, who was responsible for the deaths of his wife and daughter as part of a wide ranging purge following the accession of Kim Jong-un. Taking pity on him, the CEO eventually gives him the address of his target, adding that he hopes Ji can learn to forgive him (which seems unlikely), but is assassinated by other agents that same night. Arriving at the scene too late, Ji finds himself framed for the killing and charged with taking care of a secret message also in the CEO’s possession at the time of his death. Teaming up with a documentary filmmaker, Ji is now on the run and determined to find his former friend turned mortal enemy before the authorities catch up with him whilst also trying to work out what to do with his boss’ coded message.

Family, debts of honour, and bonds between men are at the centre of this fast paced thriller as Ji attempts to navigate this ever changing conspiracy torn between friends turned enemies and enemies who may become friends. His main adversary is a government agent, Min (Park Hee-Soon), whom he previously encountered during a mission in Hong Kong during which he made the decision to spare Min’s life after catching sight of a photo of his wife and son in his wallet. Min, however, is less than grateful as the failed mission greatly damaged his career prospects and so he has a personal grudge with Ji which he hopes to exorcise through arresting him. On the other side, Ji is also on the hunt for his former training buddy, Lee (Kim Sung-Kyun), whom he believes to have been responsible for the death of his own wife and child though later discovers that perhaps they have all merely been pawns in a much larger game.

The larger game appears to include worldwide arms sales by turns frustrated and conducted by North Korean agents. The conspiracy, however, is very much home grown in terms of its South Korean genesis but makes clear the complicated relationship between the two territories which is very much open to abuse by those who have access to both sides. The big bad turns out not to be the totalitarian regime with its constant purges and rigid enforcement of its political power, but the greedy and venal, power hungry petty officials of the democratic regime working in concert with big business.

Won has obviously drawn inspiration from the first Bourne film, offering several blatant homages including a long car chase referencing The Italian Job by proxy. His shaky cam aesthetic is perhaps overworked, but the fight scenes are undoubtedly impressive, anchored by the astounding performance of unlikely action star Gong Yoo – hitherto known as a sensitive leading man and frequent romantic lead. Having piled on the pounds, Gong is a credible vengeful presence apparently providing many of his own stunts including a strangely overblown sequence which sees him rock climbing bare chested only to emerge panting and glistening next to the flapping North Korean flag. Nevertheless, his near silent performance is a masterclass of physical acting, adding a much needed emotional dimension to the otherwise straightforward script which leaves little time for character development in between its admittedly impressive set pieces. Overlong yet moving at a rip roaring pace, The Suspect is a surprisingly well photographed action fest which manages to add a degree of pathos to its closing scenes even if failing to completely earn it whilst engaging in a series of subtle political allegories.

Prison can be a paradise if you’re doing it right, at least if you’re a top gangster in the movies. Na Hyun’s The Prison (프리즌) paints an interesting picture of incarceration and the way it links into his nation’s infinitely corrupt power structures. When investigators wonder why a crime spree suddenly came to an end, one of the frequently offered explanations is that the perpetrator was most likely arrested for another crime but what if you could turn this obviously solid alibi to your advantage and get those already behind bars to do your dirty work for you?

Disgraced policeman Song Yoo-gun (Kim Rae-Won) has wound up imprisoned alongside several of the men he himself helped put away. Like many cops who suddenly find themselves on the other side of the bars, Yoo-gun’s life is not easy. Badly beaten, tortured, and threatened with amputation Yoo-gun eventually starts fighting back and seizes the most likely path to prison survival – allying himself with the inside’s big guy, Jung Ik-ho (Han Suk-Kyu). Ik-ho, a notorious gangster famous for eating the eyeballs of his enemies, is the one who’s really in charge around here, not least because he’s the one running the gang of prison based hitmen trotted out to take care of the bad guys’ hit list.

What starts out as an intriguing idea quickly descends into predictability as Yoo-gun and Ik-ho face off against each other, finding common ground and camaraderie but ultimately existing on the plains of good and evil. Yoo-gun has his own reasons for landing himself in prison but his policeman’s heart still loves truth and justice even if he’s forced to become a prisoner whilst in prison. While he goes along with Ik-ho’s crimes, joining in the violence and intimidation he practices, he also wants to take Ik-ho down even if it means becoming him in the process.

While the interplay between the two men forms the central axis of the film as they develop an odd kind of grudging friendship which may still end on the point of a knife at any moment, Na tries his best to recreate the world of the grim ‘80s action thriller. Technically speaking, The Prison is set in the ‘90s (not that viewers outside of Korea would notice aside from the external lack of mobile phones, computers, internet etc) but wants to be the kind of tough, bruisy, fight heavy action movie they don’t make any more in which a righteous hero defeats a large-scale conspiracy by jump kicking hoodlums. He almost succeeds in this aim, but never quite manages to anchor the ongoing background conspiracy elements with the intense pugilism of the prison environment.

Yoo-gun and Ik-ho are obviously a special case but aside from their efforts, prison life in Korea is not too bad – the guards are OK, the warden is ineffectual, and the inmates are running the show. Nevertheless the prison is the centre of the conspiracy as elite bad guys take advantage of put upon poor ones who’ve found themselves thrown inside thanks to ongoing social inequality, trading cushy conditions to guys who’re never getting out in return for committing state sponsored crimes. Needless to say, someone is trying to expose the conspiracy which would be very bad news for everyone but rubbing them out might prove counter productive in the extreme.

Na lets the in-house shenanigans drag on far too long, pitching fight after fight but failing to make any of his punches land with the satisfaction they seem to expect. Flirting with the interplay between Yoo-gun and Ik-ho in wondering how far Yoo-gun is prepared to go or whether he is destined to become his criminal mentor rather than destroy him, Na never fully engages with the central idea preferring to focus on the action at the expense of character, psychology, or the corruption which underlines the rest of the film. Nevertheless The Prison does have the requisite levels of high-octane fights and impressive set pieces including the fiery if predictable prison riot finale. Life behind bars isn’t all it’s cracked up to be after all, the corrupt elites of Korea will have to actually pay people to off their enemies. Predictable and poorly paced, The Prison is best when it sticks to throwing punches but might be more fun if it placed them a little better.

The Prison was screened at the 19th Udine Far East Film Festival.

Follow Windows on Worlds on WordPress.com
Join 334 other followers