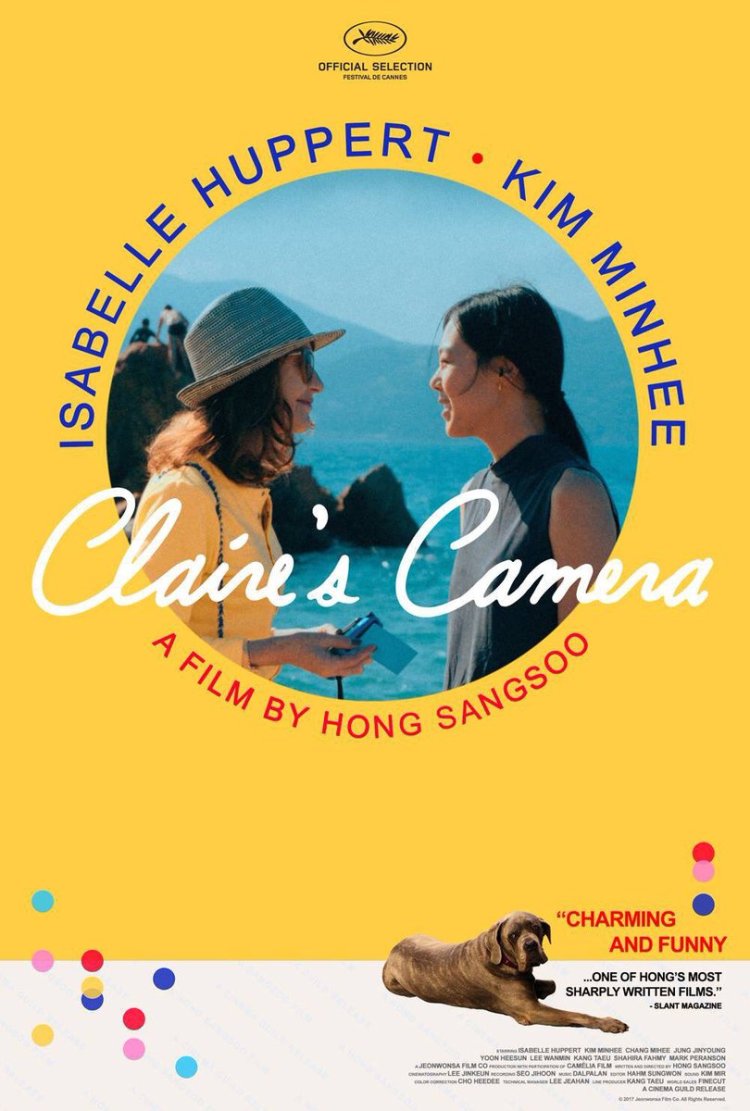 “I want talk about someone. About a man of 25, at the most. He is a beautiful man who wants to die before being marked by death. You loved him. More than that.” Hong Sang-soo channels Éric Rohmer through the aptly named Claire’s Camera (La caméra de Claire / 클레어의 카메라), but does so through the unexpected prism of Marguerite Duras whose poem is recited in French at the request of a sleazy Korean film director (Jung Jin-young) making a clumsy attempt to pick up the titular Claire (Isabelle Huppert) through an otherwise beautiful act of cross cultural interaction. The poem, like Claire’s polaroids, exists in an uncanny space – someone wants to tell us about a man we once loved as if we never knew him who wants to die before he is changed by death. Like Duras’ landmark exploration of the shock waves of imploding romance, Hong offers us life in fragments as Claire’s polaroids attempt to rewrite a half remembered history in order to make sense of a disordered present.

Film sales assist Man-hee (Kim Min-hee) is abruptly fired by her boss, Yang-hye (Chang Mi-hee), right in the middle of the Cannes film festival. Yang-hye offers no real reason why Man-hee has to go save that her perception of her has changed. She no longer feels that Man-hee is an “honest” person and as a person who values “honesty” she no longer feels comfortable working with her. Rather than lick her wounds back in Seoul, Man-hee decides to enjoy the rest of her time in Cannes as a kind of holiday which is how she ends up meeting Claire – an older French woman who is visiting the city for the very first time and has brought along her Polaroid camera to properly record the event.

Claire seems to pop-up here, there, and everywhere, dressed in an old-fashioned detective’s outfit of a stylish trench coat and trilby, snapping away like she’s gathering evidence about an international conspiracy. Striking up an awkward conversation with melancholy womanising film director So eventually brings her into the orbit of the three Koreans who are, we later realise, involved in an embarrassing workplace love triangle. Yet each time Claire appears, her photos don’t make sense – she has a photo of Man-hee wearing her trench coat that we never see her take while her other pictures seem generally out-of-order with the timeline as it has been presented to us.

The only way to change things, Claire intones, is to look at everything again very slowly. Ironically enough she offers the opportunity to do just that by means of instant photography, snapping a still frame of a painful memory in order to ruminate and reconsider. She claims she takes photographs as a means of being in the moment – after all, once you take the photo the subject is no longer the same. The act of being photographed has perhaps changed them, but more than that time has passed and we’re all seconds older now than we were before if perhaps no wiser. Yet looking at the photograph, literally looking at yourself from an external perspective, prompts a reevaluation of the past and perhaps changes the course of the present.

There is also, of course, a meta dimension to all this – as he had in The Day After and On the Beach at Night Alone, Hong muses on his own romantic difficulties in casting his real life love Kim Min-hee as a character with a near identical name while also ensuring that So is even more of a Hong stand-in than his usual leads. Man-hee has been unfairly dismissed because of an indiscretion with the drunken director who has had her fired, by his current girlfriend, out of a sense of embarrassment. Both Yang-hye and So are “shocked” by Claire’s photograph which frames her in a sultry pose wearing (they claim) much more makeup than usual, while So, spotting her at a party, goes into a semi-paternal rage about Man-hee’s (not really all that short) denim hot pants and generally “immodest” appearance. Berating her for a supposed lack of self-confidence, accusing her of “selling herself” and trying to catch the attention of men, So “directs” her to be more authentic. Which is quite something seeing as he is currently dressed in a borrowed tux in order to conform to social expectations.

Authenticity, or more directly “honesty”, becomes a running theme from Yang-hye’s instance that Man-hee is “dishonest” to a young filmmaker’s insistence that it’s hard to make an “honest” film. Claire, at least, seems to be embarking on a process of “honest” art even if nothing she says or does quite adds up. Light and bright and breezy, Claire’s Camera is Hong in Rohmer mode, wistful yet resigned and perhaps even hopeful. There’s a reason everyone seems to be so “reasonable” even in the most unreasonable of situations, other people’s feelings are not something that can be debated and are best accepted even if understood only retrospectively. Claire and her camera seem perfectly aware of that, silently observing in preparation for presenting evidence in a self inquisition, but doing so with kindness even in the knowledge that sometimes it’s easier not to look.

Claire’s Camera was screened as part of a teaser series for the upcoming London Korean Film Festival. The next screening in the series will be Gonjiam: Haunted Asylum at Picturehouse Central on 30th August.