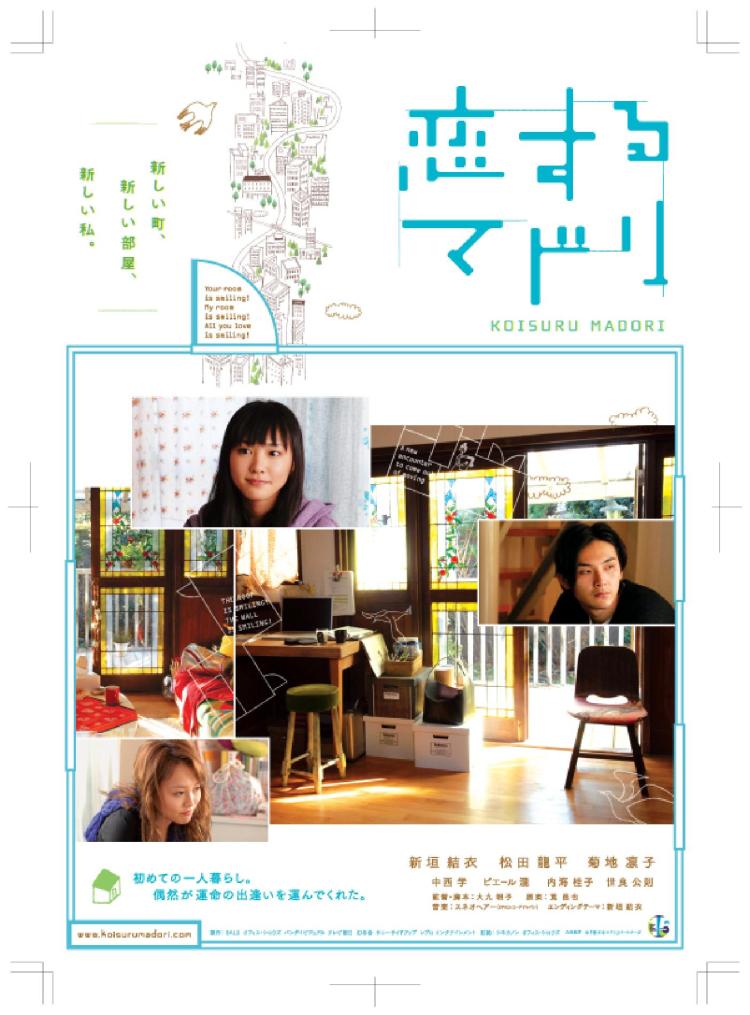 Cities are often serendipitous places, prone to improbable coincidences no matter how large or densely populated they may be. Tokyo Serendipity (恋するマドリ, Koisuru Madori) takes this quality of its stereotypically “quirky” city to the limit as a young art student finds herself caught up in other people’s unfulfilled romance only to fall straight into the same trap herself. Its tale may be an unlikely one, but director Akiko Ohku neatly subverts genre norms whilst resolutely sticking to a mid-2000s indie movie blueprint.

Yui Aoki (Yui Aragaki) is in search of a new apartment. She had been living in an unusual old fashioned building with beautiful stained-glass windows, but her sister’s in line for a shotgun marriage and if that weren’t trouble enough the apartment is set for demolition. Living on her own for the very first time, Yui moves into a smallish modern apartment in a building filled with various eccentric residents.

One in particular catches Yui’s attention – her mysterious upstairs neighbour, Takashi (Ryuhei Matsuda). By coincidence, Yui ends up working with Takashi at his lab where she learns he’s still broken up about a girlfriend that left him flat without even a word of goodbye. Remembering she left something behind at her old place she ends up meeting the new tenant, Atsuko (Rinko Kikuchi), and striking up a friendship with her over a shared interest in homemade furnishings. The coincidences continue as Yui discovers she and Atsuko have accidentally swapped apartments! Through this odd chain of events Yui also figures out that Atsuko is Takashi’s long lost love, but is hopelessly trapped in the middle, unsure of whether she should reveal this information to either party. Of course, her developing feelings for both Atsuko and Takashi place her in a series of difficult positions.

Tokyo Serendipity was sponsored by an interior design company and so it’s no surprise that the film makes quite a lot out of its production design. The fashion choices are very much of the time and favour quirky, individual aesthetics rather than an Ikea-esque off the peg minimalism. The original apartment which is soon to by bulldozed is an artist’s dream with its hidden fireplace, old fashioned furniture, stained glass windows and well lit interior. Broadly inspirational in this regard, it’s a thrifty kind of homestyle which prizes recycled materials and repurposed furnishings as opposed to the trendy high price surroundings of other parts of the city.

Like many other films of its kind from this era, Tokyo Serendipity adopts a natural, if occasionally surreal, approach filmed with a deadpan camera. The film’s one repeated large scale gag – a group of lucha libre wrestlers who work as removal men during the day, is a good example of this as their not improbable existence somehow seems oddly funny. They drop things but only in the ring – so they say, each of them well built men treating Yui’s precious goods as daintily as children using real china at a tea party. The humour could best be described as subtle, yet does succeed in raising a smile here and there.

Smiling turns out to be the film’s main message. In fact Ohku even states that her intention in making the film was solely to leave people with a smile of their faces – something which she broadly achieves. Atsuko, a slightly lost middle aged woman, claims she became an architect as she wanted to build a house with everybody smiling – something Yui echoes as she comes to a few conclusions of her own nearing the end of the film. However, Atsuko’s desire for harmony in all things is one she’s never been able to fulfil as childhood abandonment has left her with lingering commitment issues. Simply put, she always leaves first. Interestingly enough, Yui’s burgeoning romance takes a backseat to her growing friendship with Atsuko and a half-formed acknowledgment of middle-aged regrets she’s still to young to fully understand.

Despite amassing almost all of the conventional romantic comedy/drama motifs from a last minute dash to the airport and misdirected letters to an embarrassing scene where a relative is mistaken for a lover, Ohku rejects the romantic model as her central character wisely recognises exactly where she stands in this awkward situation and makes a sensible decision motivated by the best interests of both of her friends. Straightforwardly indie in style, Ohku keeps the quirk on a low simmer but manages to make her heightened reality seem perfectly natural. An unusual coming of age film trapped inside an indie romance, Tokyo Serendipity is like one of the tiny hidden spaces the film seems to like so much, though upon opening the door some will be more impressed with what they find than others.