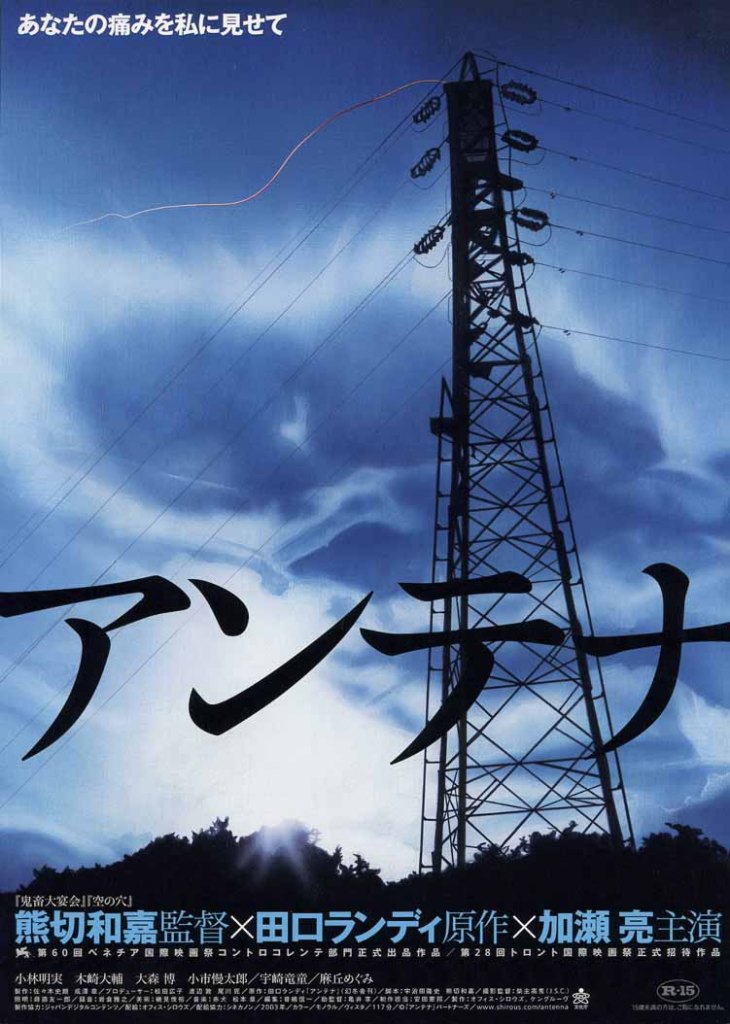 Scarring, both literal and mental, is at the heart of Kazuyoshi Kumakiri’s third feature, Antenna (アンテナ). Though it’s ironic that indentation should be the focus of a film whose title refers to a sensitive protuberance, Kumakiri’s adaptation of a novel by Randy Taguchi is indeed about feeling a way through. Anchored by a standout performance from Ryo Kase, Antenna is a surreal portrait of grief and repressed guilt as a family tragedy threatens to consume all of those left behind.

Philosophy student Yuichiro (Ryo Kase) is currently working on a project which aims to reevaluate how pain is felt through attempting to identify with the pain of others. To do this he plans to investigate the S&M scene but before he can get started, a painful episode from his past is reawakened by current events. Yuichiro’s younger sister, Marie, has been missing since failing to return home from school one day when she was only eight years old. When news reports appear that another girl around the same age has been held captive in a nearby apartment complex since around the time Marie went missing hopes are sparked only to be dashed. Still no closer to discovering what happened to his younger sister, Yuichiro carries the guilt of having been unable to protect her as well as the inability to remember exactly what happened on that fateful day.

Matters come to a head when Yuichiro’s younger brother (their mother was pregnant with him at the time of the disappearance) turns up on his doorstep. Yuya (Daisuke Kizaki) repeatedly claims that Marie is about to return as he can feel her through his “antenna” (“like the horns of a snail”) and has a full scale fit aboard the train back. Things being what they are, the doctors advise Yuichiro to spend sometime at home as his distracted mother is no shape to cope with Yuya’s increasingly odd behaviour. A dutiful son, Yuichiro does what he can for what’s left of his family but his childhood home is far from a good environment for him.

Soon after Marie’s disappearance, both Yuichiro’s father and his uncle Shige who’d lived with them both died, leaving only Yuichiro’s mother and baby brother behind them. Unable to come to terms with Marie’s disappearance, Yuichiro’s mother has found religion, hosting Buddhist prayer sessions at the house and bringing in Feng Shui experts to try and heal the lingering sense of tragedy still present in the house. She has also become convinced that her second son, Yuya, is in fact the returned spirit of her daughter, raising him as a girl and dressing him in Marie’s clothes. This may explain some of Yuya’s conflicting behaviour and repeated insistence that his sister is “returning” in so much as something of her personality has become the ghost in his machine.

Once back in the house, Yuichiro’s mental state becomes ever more precarious as his memories of his sister’s disappearance begin to flicker to the surface. Overcome with repressed guilt, Yuichiro once again begins self harming by slashing his chest with a box cutter. Easing the mental pain with the physical, Yuirichiro finally begins to address some of his long buried trauma through repeated meetings with the dominatrix he was interviewing for his project. Undergoing a kind of S&M lead sex therapy, Yuichiro is slowly guided back through his memories to events he was too young to understand at the time and only now is fully able to comprehend.

Throughout his flashbacks Yuichiro is always sidelined, perched behind barriers or shut away by closed doors as the adults argue and loudly discuss things they claim are not suitable for children to hear. Crucial moments find him peaking through keyholes and seeing something he knew was not quite right but without knowing why. These incomplete and incomprehensible memories are the ones which haunt him, unresolvable but still trailing the guilt behind them of having seen yet done nothing.

Told in a slight non-linear fashion through frequent flashbacks, the film adopts a dreamlike tone and surreal imagery to make sense of the more extreme elements. The final sequence itself is either a hallucination or a dream that takes on a magical realist quality as the past is finally allowed to drift away from its lodging place, freeing up a space for light to return to the otherwise darkened house.

An intense exploration of buried trauma and childhood guilt, Antenna is a dark tale but does offer a glimmer of hope after all its hellish meandering. Kumakikri keeps things straightforward but his considered compositions have a strange kind of beauty despite the ugliness of the narrative. Embracing a number a taboo subjects coupled with strong emotion and explicit content, Antenna is not an easy watch but rewarding for those who can brave its extremes.