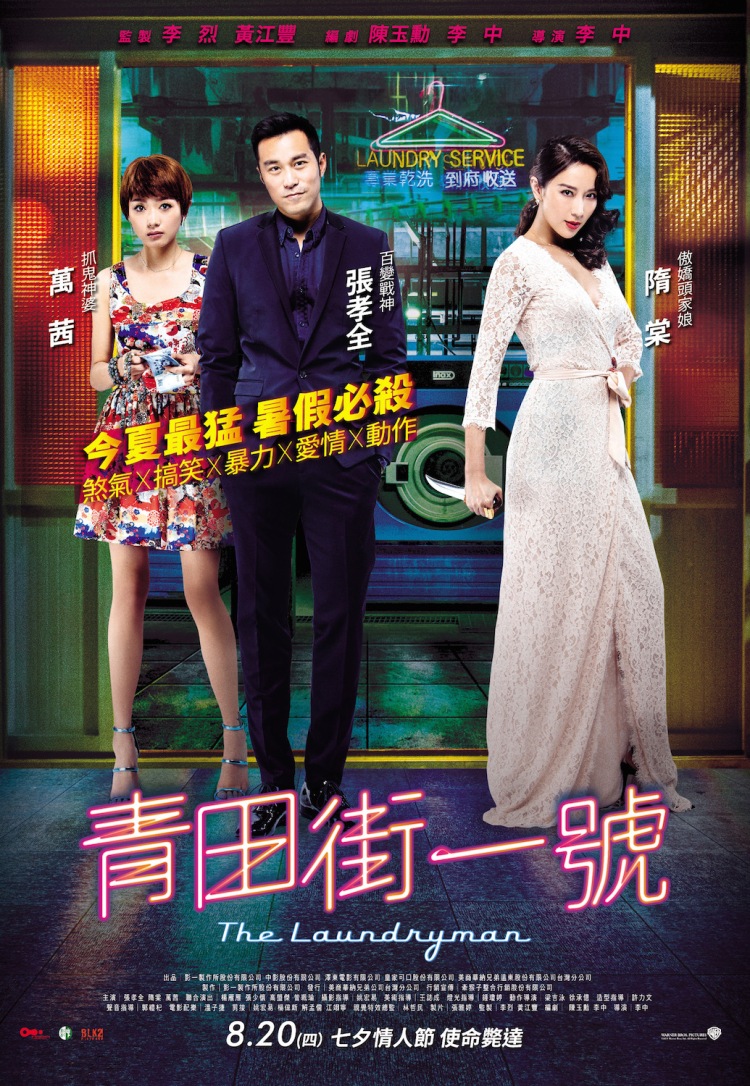 Could you, should you, attempt to wash away life’s “stains” by erasing them? The hero of Lee Chung’s The Laundryman (青田街一號, Qīngtián Jiē Yīhào) is engaged with just that in his clandestine occupation in which he works as a kind of “cleaner”, smoothing the wrinkles out of life’s little problems for the monied and unscrupulous. Yet he finds himself “haunted” by his crimes, accused by those he so casually dispatched without asking why, and eventually forced into a reexamination of his life and work.

Known only by the cryptic codename “No. 1, Chingtian Street” (Joseph Chang Hsiao-chuan), our hitman is one of many working for the mysterious A-gu (Sonia Sui Tang) at her family laundry which she runs as a cover for her stable of assassins, claiming that they merely clean the stains from people’s lives rather than their clothes. A-gu’s methods are complex and exacting. Picking up concerned citizens in the street, she guides them towards her services before Chingtian or one of his colleagues inserts themselves into their target’s daily routine, knocks them off in a quiet sort of way, then brings the body “home” to be “laundered”.

The snag is that Chingtian has recently become plagued by the spirits of those he’s killed. Three of them, to be exact (and an extra one he didn’t off but has started following him anyway). Traditional therapy proving no help, A-gu sends Chingtian off to see Lin (Regina Wan Qian), a pretty psychic, despite affirming that all of this is some weird thing going on with Chingtian’s head rather than genuine paranormal activity. Lin, spotting his ghostly followers right away, explains to Chingtian that they most likely have unfinished business – i.e. finding out who wanted them dead and why. There is, however, a little more to it than that as a further trail of death begins to linger behind Chingtian that leads back to a dark and repressed memory of his youth.

Despite its whimsical tone, Lee’s drama leans heavily into the darkness in asking why it is someone might decide to pay to have someone else killed. The answers aren’t the ones you’re expecting. No business disputes or political machinations, only frustrated loves and loneliness. A nerdy young loner falls for the larger lady from next-door and is horrified to realise that her boyfriend beats her to the point at which she has begun to consider suicide as a means of escape. He wants to save her, and after all the world might be “better off” without the violent boyfriend, so he gives in to A-gu’s alluring offer to have the guy offed (for a small fee). Meanwhile, another mark decided on his course of action out of an excess of love, or to put it more pointedly, its dark side as he became increasingly convinced he could not live up to its expectation and determined to free himself of the burden, damning himself further into a downward spiral of self-destructive humiliation.

A-gu’s life philosophies lean to towards the callous with all her talk of “cleaning” and affirmations that “useless people should be destroyed”, but as Lin points out it’s quite something else to bump off a lovely older couple – some might even call it heartless. Heartless is what Chingtian has been raised to be, so his recently reawakened humanity is quite a problem. Caught between A-gu who alternates between something like possessive mother and femme fatale (which is just as strange a dynamic as it sounds), the pixyish Lin, and later the dogged policewoman Yang (Yeo Yann Yann) who’s picked up on a trail set down for her to find but followed it further than intended, Chingtian is forced to confront himself and his past, in a sense putting his psyche on a spin cycle to reverse a lifetime’s worth of brainwashing and remember who it is he really is.

Strangely warm and fuzzy, Lee’s whimsical world of colour is a perfect mix of film noir fatalism and fairytale promise as Chingtian walks a precarious path towards reintegration of his personality while trying a fair few others on for size. The childlike silliness of an anti-ghost musical number mingles with the hard edged kung fu of a violent procedural but Lee never loses his sense of cartoonish fun even as Chingtian begins to find his answers and with them a clue to inner darknesses personal and otherwise.

Currently available to stream in the UK (and possibly other territories) via Amazon Prime Video.