Jo Shishido played his fare share of icy hitmen, but they rarely made it through such seemingly inexorable events as the hero of Takashi Nomura’s A Colt is My Passport (拳銃は俺のパスポート, Colt wa Ore no Passport). The actor, known for his boyishly chubby face puffed up with the aid of cheek implants, floated around the lower end of Nikkatsu’s A-list but by 1967 his star was on the wane even if he still had his pick of cooler than cool tough guys in Nikkatsu’s trademark action B-movies. Mixing western and film noir, A Colt is My Passport makes a virtue of Japan’s fast moving development, heartily embracing the convenience of a society built around the idea of disposability whilst accepting the need to keep one step ahead of the rubbish truck else it swallow you whole.

Kamimura (Joe Shishido) and his buddy Shiozaki (Jerry Fujio) are on course to knock off a gang boss’ rival and then get the hell out of Japan. Kamimura, however, is a sarcastic wiseguy and so his strange sense of humour dictates that he off the guy while the mob boss he’s working for is sitting right next to him. This doesn’t go down well, and the guys’ planned airport escape is soon off the cards leaving them to take refuge in a yakuza safe house until the whole thing blows over. Blowing over, however, is something that seems unlikely and Kamimura is soon left with the responsibility of saving both his brother-in-arms Shiozaki, and the melancholy inn girl (Chitose Kobayashi) with a heart of gold who yearns for an escape from her dead end existence but finds only inertia and disappointment.

The young protege seems surprised when Kamimura tosses the expensive looking rifle he’s just used on a job into a suitcase which he then tosses into a car which is about to be tossed into a crusher, but Kamimura advises him that if you want to make it in this business, you’d best not become too fond of your tools. Kamimura is, however, a tool himself and only too aware how disposable he might be to the hands that have made use of him. He conducts his missions with the utmost efficiency, and when something goes wrong, he deals with that too.

Efficient as he is, there is one thing that is not disposable to Kamimura and that is Shiozaki. The younger man appears not to have much to do but Kamimura keeps him around anyway with Shiozaki trailing around after him respectfully. More liability than anything else, Kamimura frequently knocks Shiozaki out to keep him out of trouble – especially as he can see Shiozaki might be tempted to leap into the fray on his behalf. Kamimura has no time for feeling, no taste for factoring attachment into his carefully constructed plans, but where Shiozaki is concerned, sentimentality wins the day.

Mina, a melancholy maid at a dockside inn, marvels at the degree of Kamimura’s devotion, wishing that she too could have the kind of friendship these men have with each other. A runaway from the sea, Mina has been trapped on the docks all her adult life. Like many a Nikkatsu heroine, love was her path to escape but an encounter with a shady gangster who continues to haunt her life put paid to that. The boats come and go but Mina stays on shore. Kamimura might be her ticket out but he wastes no time disillusioning her about his lack of interest in becoming her saviour (even if he’s not ungrateful for her assistance and also realises she’s quite an asset in his quest to ensure the survival of his ally).

Pure hardboiled, A Colt is My Passport is a crime story which rejects the femme fatal in favour of the intense relationship between its two protagonists whose friendship transcends brotherhood but never disrupts the methodical poise of the always prepared Kamimura. The minor distraction of a fly in the mud perhaps reminds him of his mortality, his smallness, the fact that he is essentially “disposable” and will one day become a mere vessel for this tiny, quite irritating creature but if he has a moment of introspection it is short lived. The world may be crunching at his heels, but Kamimura keeps moving. He has his plan, audacious as it is. He will save his buddy, and perhaps he doesn’t care too much if he survives or not, but he will not go down easy and if the world wants a bite out of him, it will have to be fast or lucky. 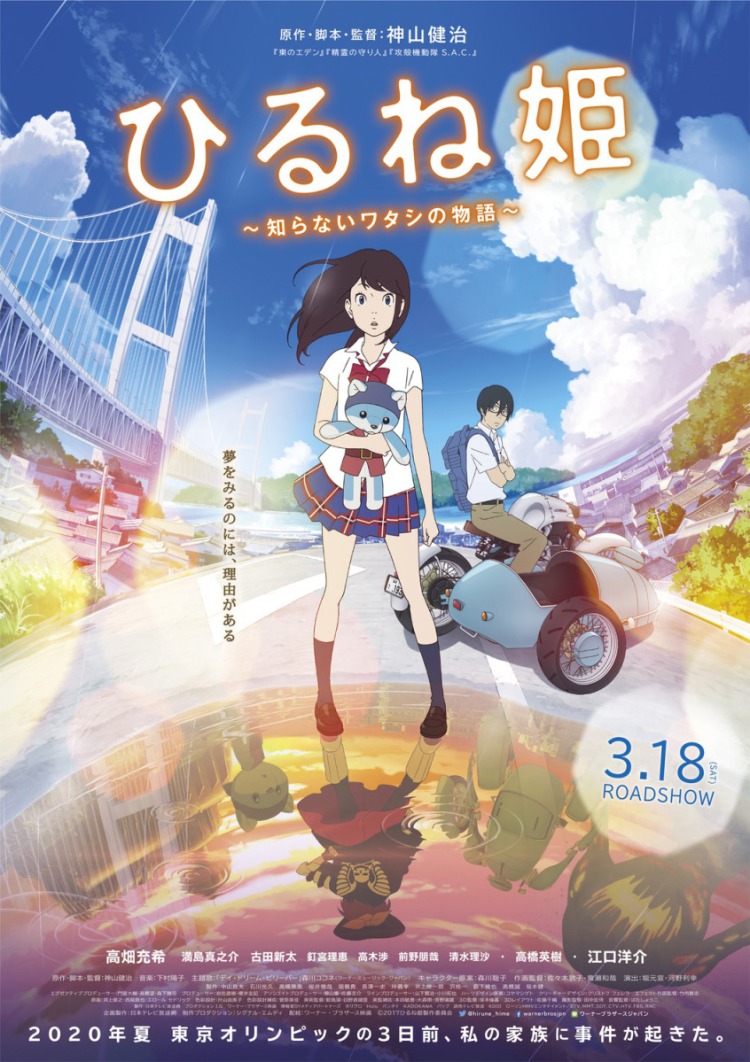 Kenji Kamiyama has long been feted as one of Japan’s most promising animation directors, largely for his work with Production I.G. including the Ghost in the Shell TV anime spin-off, Stand Alone Complex, and conspiracy thriller Eden of the East. Aside from the elegantly shaded quality of his animation, Kamiyama’s work has generally been marked by thoughtful social and political commentary mixed with well executed action scenes and science fiction themes. Napping Princess (ひるね姫 〜知らないワタシの物語〜, Hirune Hime: Shiranai Watashi no Monogatari, also known by the slightly more intriguing title Ancien and the Magic Tablet) swaps science fiction for steampunk fantasy and, in a career first, is aimed at younger children and family audiences.

With the 2020 Tokyo Olympics fast approaching, Kokone (Mitsuki Takahata) is a regular high school girl about to enjoy her very last summer holiday before graduation. With no clear ideas of what it is she wants to do with her life, Kokone idly whiles away her time looking after her monosyllabic single dad, Momotaro (Yosuke Eguchi), who only seems to be able to communicate with her via text. Momotaro is a mechanic with a difference – he knows how to retrofit cars with a hi-tech, experimental self driving software that’s a real boon to the ageing population in the tiny rural town where the pair live.

A dreamy sort of girl, Kokone is always tired and frequently drifts off into a fantasy land where the car industry is all important and all are at the mercy of an iron fisted king whose sorceress daughter continues to cause problems for the population at large thanks to her strange powers. Whilst in her dream world, Kokone (or Ancien as she is known in “Heartland”) is accompanied by a her stuffed toy come to life and interacts with slightly younger versions of the people from her town including a dashingly heroic incarnation of her father as a young man.

The main action kicks off when Momotaro is arrested by an evil looking guy who wants a mysterious tablet he says Momotaro has stolen from their company. The fairytale inspired dreamworld might indicate a different kind of tablet, but this really is just a regular iPad with some information on it that certain people would very much like to get their hands on and other people would very much prefer that they didn’t. The tablet itself is a kind of macguffin which allows Kokone to process some long held questions about her past and that of her late mother who passed away when she was just an infant.

Kokone’s frequent flights of fancy start to merge with the real world, firstly when she shares a lucid dream with companion Morio (Shinnosuke Mitsushima) who helps her on her quest, and then later when magic seems to come to the pair’s aid through the tablet (though this turns out to have a more prosaic explanation). At 17 or so, you’d think perhaps Kokone is a little old for these kinds of fantasies, or at least for carting around a stuffed toy which is in remarkably good nick for something which apparently belonged to her mother when she was a child. Nevertheless, her dreamland is a long buried message which helps her piece together her mother’s story and how it might relate to her own all while she’s busy saving the Opening Ceremony of the 2020 Olympics from becoming a possibly lethal international embarrassment which would destroy the Japanese car industry for evermore.

Despite his prowess with harder science fiction subjects, Kamiyama can’t quite corral all of this into a coherent whole. Valiantly trying to merge the twin stories of Kokone’s coming of age and the problems of the Japanese auto industry which is good at hardware but struggles with soft, Napping Princess narrowly misses its target neither quite charming enough in its fantasy universe or moving enough in the “real” one. This may perhaps rest on a single line intended to be a small revelation which melts the icy CEO’s heart but essentially comes down to the use of a kanji in a name being different from one on a sign, losing much of its impact in translation as it accidentally explains the whole of Kokone’s existence in one easy beat which easily missed. Failing to marry its two universes into one perfect whole, Napping Princess is a pleasant enough though perhaps inconsequential coming of age story in which a young girl discovers her own hidden powers whilst unlocking the secrets of her past.