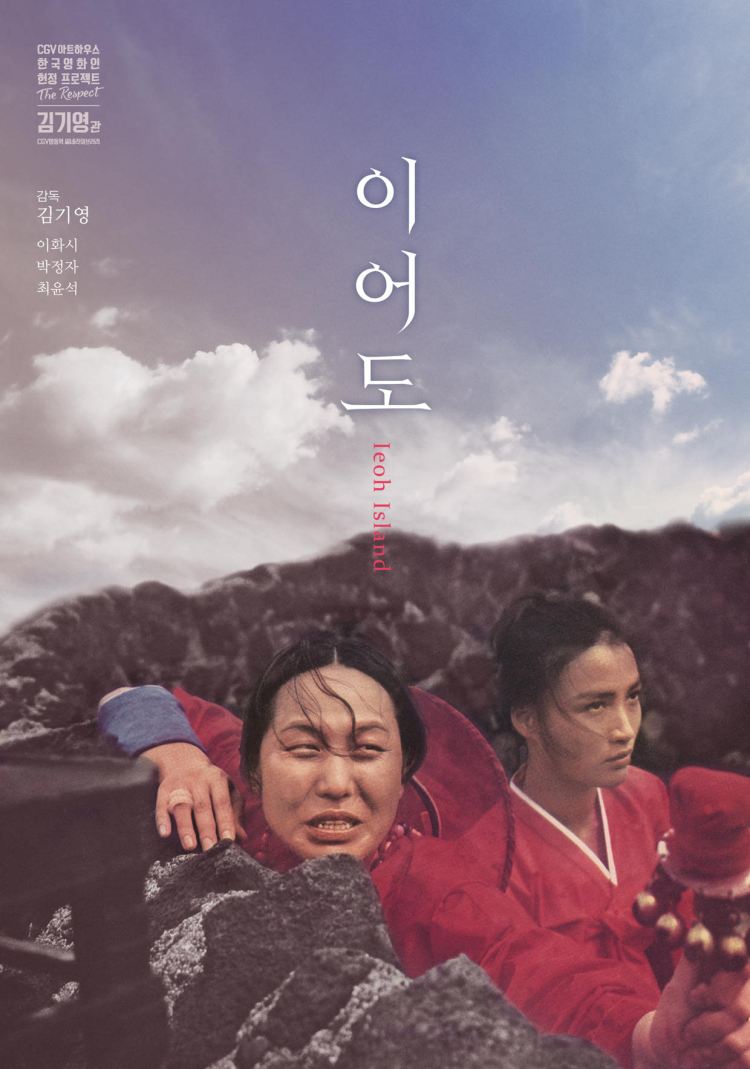 In the hyper-masculine and intensely patriarchal atmosphere of Korea under Park Chung-hee, Kim Ki-young spins a tale of male obsolescence in the mysterious Ieodo (異魚島 / 이어도, AKA Ieoh Island). The eponymous island, apparently a kind of paradise home to the lonely ghosts of fishermen lost at sea, becomes a symbol of the impossible life drive of its impotent protagonists who find themselves taken by the island before their time while the community of women asserts its primacy in rendering men “redundant” through finding new ways to procreate.

The hero, Hyun Seon-woo (Kim Jeong-cheol), is an executive at a tourism company who is struggling to conceive a child with his wife and undergoing the early stages of IVF treatment. Alarmed to realise that his wife could have a child without him thanks to his frozen sperm, he throws himself into his work, planning for a new hotel development to be called “Ieodo” after the mythical fisherman’s paradise. Organising a publicity stunt in which journalists and industry guests are asked to board a boat to an unknown destination backfires spectacularly when a reporter, Chun Nam-seok (Choi Yoon-seok), becomes extremely upset and insists on turning the boat around on learning they will be heading towards the mythical island. Nam-seok accuses of the hoteliers of appropriating local culture, while even the boat’s captain expresses dismay at the thought of breaking such a strong taboo. Seon-woo offers to settle the matter with a drinking contest, eventually passing out during which time Nam-seok “falls” off the boat, leaving him the prime suspect in the man’s death. Convinced that Nam-seok must have taken his own life, he determines to investigate the case himself with the help of Nam-seok’s editor (Park Am).

Seon-woo’s quest takes him to the nearby island where Nam-seok was born, Parang – a place inhabited solely by women which all men must leave on having a child. Parang is a place where tradition reigns and superstition is prevalent. Guided to the local shamaness (Park Jeong-ja) by a timid widow, Seon-woo and the editor are told that Nam-seok’s family were under an ancestral curse in which all the men of previous generations were eventually taken by the “Water Ghost” of Ieodo, including Nam-seok’s own father. After his mother died of grief, Nam-seok tried to escape, but now, the villagers seem to believe, he too has returned to embrace his fate proving that the Water Ghost will always take what is hers by right.

In order to get around the lack of menfolk, the women practice what a friend of Nam-seok’s calls “both the most primitive and the most modern” form of marriage in which they copulate with men of their choosing during a candlelight ritual. Having sworn off having children himself, at least on the island owing to the curse, Nam-seok takes up with the wealthy widow Mrs. Park (Kwon Mi-hye) who finances his unusual business venture – an abalone farm designed to bring prosperity back to the island where the traditional diving business has begun to flounder thanks to the corruption of the modern world.

The fish in the ocean are dying because of industrial pollution – itself a problem produced by the thoughtless capitalism of the Park Chung-hee’s authoritarian regime and its relentless drive forward into economic dynamism at all costs. Watching his seed fall on stony ground (literally and figuratively), Nam-seok becomes enlightened to environmentalism, bemoaning that the ancestors of humanity cared for the planet for thousands of years only for recent generations to destroy it. It’s the end of the world, he says, everything is rotting. Which might, after a fashion, explain why everyone seems to be finding it so difficult so have children.

Nam-seok’s attempts to artificially breed abalone link straight back to Seon-woo’s inability to father a child with his wife whom, we are told in the very beginning, eventually died without ever giving birth. We’re told that sperm survives its host, that the sperm of a man who froze to death on the mountains was found to be perfectly viable once defrosted and that, therefore, Seon-woo himself is a largely irrelevant presence in his his wife’s ongoing quest to have a child. The island women too who do things the “traditional” way, had also stumbled on a way to conceive children in the absence of men, or at least in the absence of “living” men in realising that sperm could often be harvested from the dead and applied by means of ritual.

Kim returns to his favourite themes of sex and death as two literally become one. “All fears disappear when men and women unite”, the mysterious barmaid (Lee Hwa-si) tells an increasingly confused Seon-woo who has come to embody for her the soul of the lost Nam-seok whom she believes to be her spiritual husband. “Everything is only momentary”, he answers her, “eternity is a word which deceives us”. Seon-woo admires “the incredible energy of women who risk their lives to have children”, but if the island is to survive it can only be in the absence of his destructive male energy. Like countless men before him, he must leave, not for the paradise of Ieodo, but for the rapidly declining modern society, while a woman remains behind alone – the sole guardian of a child who is also, of course, the future.

Ieodo was screened as part of the 2019 London Korean Film Festival. It is also available on English subtitled blu-ray courtesy of the Korean Film Archive in a set which also includes a complete script (Korean only) bilingual booklet, commentary by critic & director Chung Sung-ill, commentary featuring critic Kim Young-jin and director Oh Seung-uk (not subtitled), an interview with actress Lee Hwa-si, and clips of Lee Hwa-si with Jeong Beom-sik, and Park Jeong-ja with Lee Yoon-ho (no subtitles).