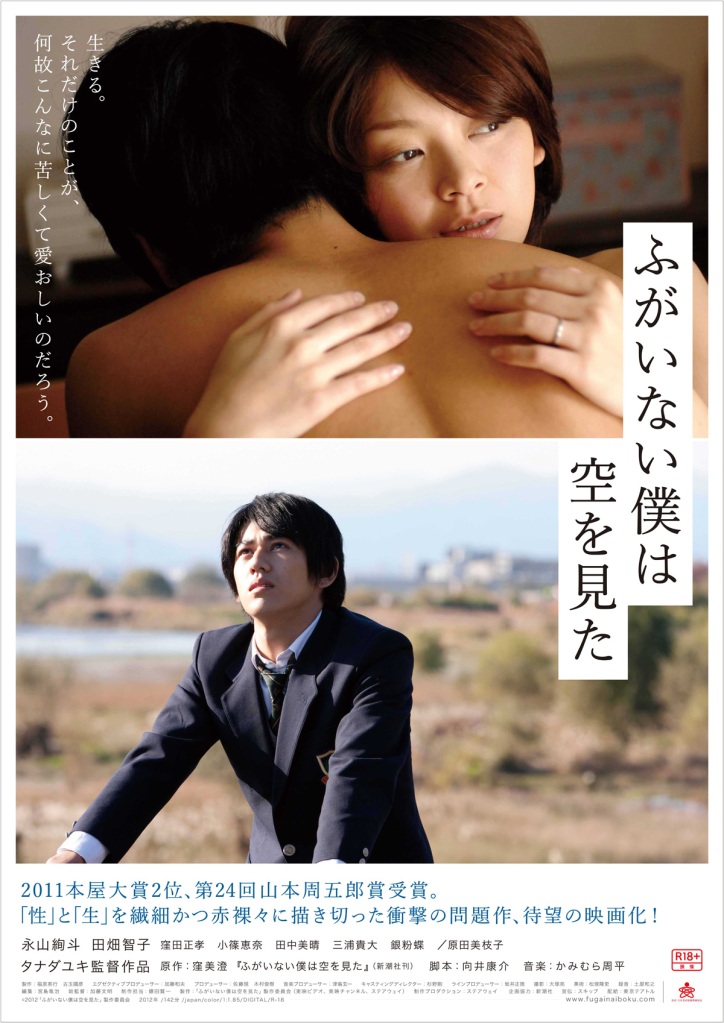 The work of director Yuki Tanada has had a predominant focus on the stories of independent young women but The Cowards Who Looked to the Sky sees her shift focus slightly as the troubled relationship between a middle aged housewife who escapes her humdrum life through cosplay and an ordinary high school boy takes centre stage. Based on the novel of the same name by Misumi Kubo, The Cowards Who Looked to the Sky (ふがいない僕は空を見た, Fugainai Boku wa Sora wo Mita) also tackles the difficult themes of social stigma, the power of rumour, teenage poverty, elder care, childbirth and even pedophilia which is, to be frank, a little too much to be going on with.

Told in a non-linear, overlapping structure the central spine of the film follows unfulfilled housewife Satomi who likes to dress up as her favourite character from the retro anime Magic Girl. Whilst dressed as its heroine, Anzu, she spots a high school boy at a convention who looks eerily like the anime’s hero, Muramasa. Takumi is only at the convention with a friend and has no particular interest in anime but as the two live in the same area “Anzu” convinces Takumi to come and try on a Muramasa outfit at her place. One thing leads to another and the pair embark on a proxy affair which takes the form of role-play between the two anime characters carefully scripted by Satomi. However, Satomi’s hitherto disinterested husband begins to notice a change in her behaviour and has spy cameras installed catching the hot cosplay action for all to see. When he uploads the video to the internet it causes a serious problem for the young and impressionable Takumi.

Actually, there’s a third person in Satomi’s marriage to her feckless husband Keiichiro in the form of his overbearing mother. So far, the couple have no children despite having been married for some time and this has distressed Michiko to the point that she’s the one dragging the couple in for IVF treatment and getting upset when it doesn’t work. Her son, Keiichiro, has weak swimmers and actively doesn’t want children but this doesn’t stop Michiko taking all her frustrations out on Satomi whom she brands as “defective” and gives the impression that she’d like to “fire” her if she could. A shy woman and probably quite bored as a stay at home housewife, Satomi retreats into fantasy by cosplaying as the familiar character from her favourite childhood anime Magic Girl. Becoming Anzu and having an affair with Muramasa isn’t quite cheating, after all, and perhaps she even hopes to have the child that her mother-in-law so desperately wants her to have even if her husband and medical science won’t help her.

Among the younger generation, Takumi lives with his mother, Sumiko, in a residential maternity clinic that she runs where pregnant women can come and be looked after in a more natural and homely environment than the comparatively cold and sterile hospital. Takumi is best friends with a boy who lives near by who, like him, has no father but unlike Takumi his mother is also an absent figure too so Ryota must work part-time at the combini whilst also looking after his grandmother who is suffering with dementia.

Sumiko tries to support Ryota by giving him occasional food parcels but as a young man Ryota sometimes finds this a little embarrassing and is offended by the idea of receiving charity. When it comes right down to it, he resents Takumi’s happy relationship with his mother and their relative financial security. The manager at the store brands Ryota a “ghetto kid” and even blames him for the increase in shoplifting by kids from the estate. He has little time to study even if he wanted to, but all he sees for his future is a great big dead end. Another worker at the store who previously worked as a teacher offers to help Ryota improve his grades and maybe even try for a university scholarship but turns out to have a dark side of his own.

Simply put, there are far too many plot strands in rotation here and the screenplay never manages to corral them into any kind of satisfying arrangement. There is a moment of unity where Ryota’s story meets Takumi’s but it’s a fairly brief point of intersection (though a hugely important one both in terms of themes and storyline) leaving Ryota’s entire subplot feeling like a distraction to the main high school boy meets damaged older woman narrative. That’s without all of the goings on at the clinic, the brief appearance of Takumi’s father and the disappearing act of Ryota’s deadbeat mother who makes off with all his savings. The film’s scope and ambition is admirable but it ultimately fails to unify its disparate plot strands into a convincingly focused form.

That said, other than running too long the The Cowards Who Looked to the Sky does have a lot of interesting elements and is always beautifully shot showing off a rarely seen side of suburban Tokyo. The performances are also of a high quality particularly given the film’s frank erotic content which is played with refreshing realism by the veteran former child actress Tomoko Tabata and the comparatively less experienced Kento Nagayama as the confused high school boy caught in the fire of his first affair. At once too superficial and too deep, The Cowards Who Looked to the Sky spreads itself too thin to make a lasting impact though does offer enough rewards to justify its lengthy running time.

Reviewed as part of the Japan Foundation Touring Film Programme 2016.