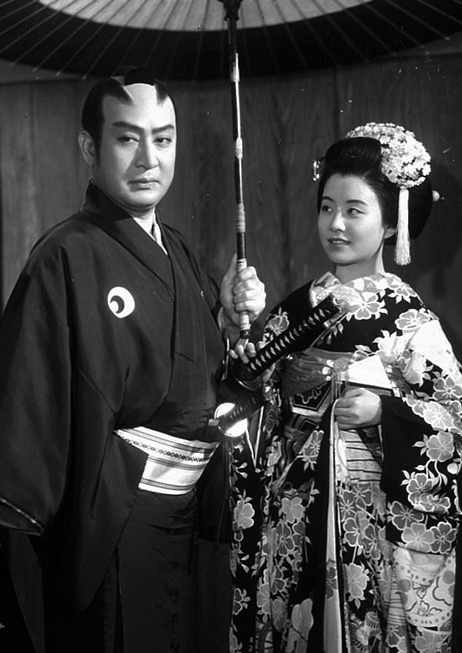 In the midst of post-war confusion, Japanese cinema increasingly looked back to Meiji in all of its chaotic possibility in order to ask what went wrong and what lessons it might have for a second kind of revolution as the nation tried to rebuild itself after decades of militarist folly and chastened wartime defeat. “Tsukigata Hanpeita” (月形半平太) is a “legendary” fictional character first imagined for a kabuki play in 1919 who finds himself swept up in Bakumatsu intrigue as he tries, along with daring revolutionaries Sakamoto Ryoma and Katsura Kogoro, to forge an alliance between the clans of Choshu and Satsuma in order to take on the corrupt shogun in defence of the Emperor and foster a new era of peace in an increasingly uncertain world.

When we first meet him, Tsukigata Hanpeita (Utaemon Ichikawa) is on the run from Kyoto-based special police force the Mimawarigumi but also making time for his mistress, Umematsu (Chizuru Kitagawa) – a geisha. This in particular is a problem which has left him dangerously exposed, even the Mimawarigumi leader Okudaira (Joji Kaieda) seems to be aware of the relationship and is apparently not above using it to his advantage. Meanwhile, he’s not only threatened by shogunate defenders, but by his own side – both by those who remain unconvinced by Sakamoto’s (Jotaro Togami) internationalist philosophy, and by those who simply hold a grudge against Satsuma because of a previous conflict and regard Tsukigata as a traitor for daring to talk to them at all. Despite everything, Tsukigata hides in the shadows and commits himself to living, and if necessary dying, to bring about a better world free of shogunate oppression.

Unlike other revolutionary legends, however, Tsukigata’s fervour has not made him cold or cruel even if he must sometimes act in ways which are mysterious and confuse those around him. Meeting a young man on a bridge, he applauds his studious nature, agreeing that “nothing is more important than to understand advanced civilisation”, and is as polite as he could be when the man tells him he has just joined the Mimawarigumi. Rather than attack or berate him, Tsukigata cheerfully wishes the young man well, allowing him the space to see that his present allegiance to the shogunate is perhaps misguided and out of line with his personal beliefs.

Indeed, his compassion extends even to Okudaira – his mortal enemy. Offering his condolences to a grieving Somehachi (Isuzu Yamada), Tsugikata laments that in a better world he and Okudaira may have been friends, that he had no personal grudge against him despite the fact that they clearly lived on different sides of an ideological divide. He could perhaps even harbour a kind of professional respect for him in his dogged defence of his duty for all he believes it to be misguided. “It’s so unfortunate”, he exclaims, “We have to make the world a better place”.

His desire to change the world is what keeps Tsukigata alive. Several times he faces certain death, but declares but he cannot die now with his great work left unfinished. He is not afraid of death and would gladly give his life in the service of his cause, only not just yet. “Would you please spare my life until I change the world?” he begs of someone he fully believes has a right to kill him, eventually winning their support and unexpected allegiance solely through his guileless goodness.

Yet for all that, his moral austerity does at times perhaps cause him problems in giving rise to emotional confusion. So it is that he winds up in an accidental love triangle with the smitten Somehachi – a former geisha turned madam whose patron is none other than Okudaira, and Umematsu an ageing courtesan with whom he has developed a more or less settled relationship. This is clearly the story of Tsukigata Hanpeita, but more than that it’s the story of the three women who support him without whom the revolution may even be impossible. Somehachi, despite her allegiance to Okudaira, has been a longstanding Tsukigata ally several times helping him escape from the oncoming Mimawarigumi, while Umematsu provides him with safe harbour and occasional message carrying services which is where teenage geisha Hinagiku (Hibari Misora) comes in, acting as a revolutionary go-between with deep-seated political passion.

Speaking strongly of female solidarity, the fallout from the love triangle is eventually minimised by the sisterly geishas who later bond in their shared support of Tsukigata and resolve to put past pettiness behind them. Meanwhile, Tsukigata is deceived by male treachery, only to finally receive the message he’s been waiting for which seems to make everything worthwhile. “I can see the dawn of a new era”, he exclaims, “the new era will be peaceful”. Suddenly he’s not just talking of himself anymore, but directly to the post-war era as he begins to see the way out of a “chaotic society” towards a prosperous future in the faces of his friends united in mutual support and the belief that his better world will soon be a reality.

A legendary screen actress, Kinuyo Tanaka completed only six films in her career as a director. The last film that she would ever make, Love Under the Crucifix (お吟さま, Ogin-sama), is the only one to be set in the historical past taking place against the backdrop of turbulent late 16th century politics just forty years or so before the nation would embark on 200 years of self imposed isolation undertaken in the name of preserving the national character while solidifying a political regime. As in her other films, however, Tanaka employs a standard melodrama narrative in order to subvert it. Her heroine defies all “for love”, but not so much in itself as for the right to it and to the legitimisation of her feelings as a human woman with all the rights and freedoms that ought to entail.

The film begins in the 15th year of Tensho (or 1587). Toyotomi Hideyoshi (Osamu Takizawa) is attempting to solidify his command over a Japan which is in a state of constant warfare. Meanwhile, foreign trade and influences, including Christianity, are flooding into the nation. There is growing suspicion among Hideyoshi’s advisors that Christian converts are nothing more than foreign spies working to undermine the social order and cannot be trusted. Therefore, Christianity is a spanner thrown in the works of Hideyoshi’s plans for peace and unification, only no one is quite sure as yet what to do about it except disapprove.

Meanwhile, our heroine, Ogin (Ineko Arima), is the step-daughter of prominent tea master Rikyu (Ganjiro Nakamura). She has long been in love with Ukon (Tatsuya Nakadai) – a young lord who has converted to Christianity and is in fact already married. Despite the impossibility of her love, Ogin holds fast to its purity and has refused all entreaties to marry. However, she is placed in a difficult position when it is made clear that a prominent suitor affiliated with the local lord desires her. Rikyu affirms that he will follow Ogin’s will, but Mozuya (Hisaya Ito) is too important a man to be refused out of hand and the consequences of turning him down may be severe. Ogin searches for a sign from Ukon, but he coldly tells her to marry, refusing any confirmation of the feelings which she believes to exist between them.

The film’s English title, Love Under the Crucifix, reminds us that this is not so much a story of religious freedom as social oppression. Divorced form its Christianising context, the crucifix was in this era the primary punishment for sexual transgression, most often for both men and women committing adultery or daring to love in places where society would not approve. Thus Ogin lives her life under it in being reminded of the potential costs of her inappropriate emotions. Even so, observing a young woman tied to the cross (Keiko Kishi) and apparently electing to go to her death rather than become the concubine of the local lord against her will, Ogin sees in it not censure but defiance and path towards personal empowerment if only in ultimate negation.

The literal crucifix becomes a noose around Ogin’s neck in the form of the necklace given to her by Ukon. Ogin remains unconvinced by Ukon’s religiosity even if she respects it but later resents the austerity it provokes in him while wondering if his friendship with her was only ever a pathway to conversion. Ukon’s troubles are multiple, not only is he oppressed by the social strictures of his time but also by an additional burden of Christianising morality which instructs him that his feelings are sinful and must be rejected.

Later, Ogin berates Ukon insisting that all of this suffering and the predicament they now find themselves in might have been avoided if only he had not kept his feelings hidden. Ukon’s religiosity obliges him to behave in ways which are cruel and selfish, and which ultimately bring him little other than additional suffering and unhappiness. This emotional tension has also played into the hands of the ruling regime who are content to use their feelings, and the prevailing tendency towards properness, against them as a plot against Rikyu and to prevent Ukon’s return as a military rival.

Despite Rikyu’s best efforts, Ogin has indeed become a pawn in the hands of men. Rikyu, as we’re reminded at the film’s conclusion, fell from favour and committed ritual suicide at the age of 70. Like Ogin, he remained true to himself even when politically unwise, advancing his philosophies of simplicity and respect for the natural world in the face of what he saw as Hideyoshi’s increasingly gaudy superficiality. Thus he councils Ogin that there is nothing wrong in her feelings and her only duty to him or to anyone else is to try to live happily even if that means she must live in hiding with the less courageous Ukon who refuses to abandon his faith but struggles to find the courage to fight for love, or more specifically for the right to love, as Ogin has done all her life.

Ogin is, in a sense, already on the cross as she continues to suffer not for faith but for faith in love and in her own right to her individual feelings and agency. Faced with being forced to surrender her body to a man she does not love because of a cruel game played by men for men, Ogin prefers death and finds in it the ultimate expression of her personal freedom and emotional authenticity.