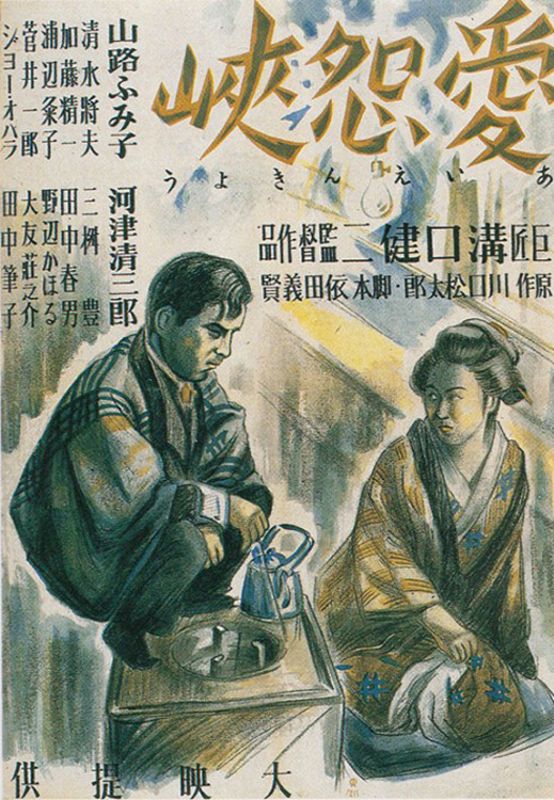 “Tokyo is a dangerous city that traps innocent people like you” the heroine of Kenji Mizoguchi’s 1937 melodrama The Straits of Love and Hate (愛怨峡, Aien kyo) is told, but it’s not so much the darkness of the city streets as the world’s cruelty which threatens to consume her soul. Loosely inspired by Tolstoy’s Resurrection, then particularly popular in Japan and a frequent source for adaptation in the silent era, Straits of Love and Hate is a familiar tale of an innocent maid seduced and betrayed by the weak willed son of her social superiors, but rather than see her beaten by a broken heart Mizoguchi allows to her to find new strength in the determination to move forward in a direction of her choosing.

Kitchen maid Ofumi (Fumiko Yamaji) is in love with Kenkichi (Masao Shimizu ), the son of local hotel owners. Now that he’s finished his studies, his parents were expecting him to take over the inn so they’re not exactly pleased when he tells them he plans to go to Tokyo to become a teacher, nor would they be very happy about the idea of him marrying a lowly maid. After arguing with his father, Kenkichi more or less gives up on the idea of leaving, deciding to postpone until his parents come round or perhaps going on his own and sending for Ofumi when he’s financially stable. Twin pressures, however, force him to accept that it’s now or never. Ofumi is a few months pregnant and will soon be showing so his hand is in a sense forced. Meanwhile, Ofumi is keen to leave as soon as possible because her uncle, Murakami (Seiichi Kato), has turned up extremely drunk and is talking to her employers about taking her away to join his troupe of travelling players which she is desperate to avoid because she remembers her mother telling her he was no good and would sell her to a brothel as soon as look at her.

Kenkichi relents and the pair elope to Tokyo, but once there his general fecklessness resurfaces. The couple have begun to outstay their welcome at the apartment of a friend whose wife is becoming thoroughly fed up with Kenkichi who lounges about all day not looking for work, while an increasingly pregnant Ofumi is out job-hunting alone in the unforgiving city. A naive bumpkin, she’s nearly scammed by a street pimp who claims to be saving her from someone in fact just like him, but is rescued by Yoshi (Seizaburo Kawazu) – a wandering accordion player regarded by all as a petty thug. Kindhearted by nature, Yoshi takes pity on her and sets Ofumi up with a job in a cafe but is soon arrested for stabbing the pimp who was bothering her. Meanwhile, the irritated wife of Kenkichi’s friend has wired his dad who promptly arrives to retrieve his son. Spineless, Kenkichi walks out on his pregnant girlfriend leaving her only with a note that says “sorry, good luck with the rest of your life”, and an insultingly small amount of compensation money.

It’s easy enough to think that Kenkichi wasn’t really invested in his romance, got cold feet, or simply rejected adult responsibility, but the truth is more that he’s just as trapped by patriarchal social codes as Ofumi is and no more free even with his comparatively comfortable class background. He lacks the will to defy his father, and is simply too lazy to consider living an ordinary life in the city with a regular job where no one calls him “young master”. Ofumi, by contrast, fights for love. She breaks the class barrier, naively believes that Kenkichi’s parents will accept her because they cannot reject their grandchild, and forgives Kenkichi’s fecklessness because she truly believes in him. One word from his father, and he crumbles. Left alone Ofumi is forced to send her son out to foster parents and has no other choice than to become a bar hostess.

Unlike Kenkichi, Yoshi is patient and kind. He truly means to protect Ofumi and her son, but also has a self-destructive violent streak as manifested in his over the top attack on the pimp and later altercation with a remorseful Kenkichi. Ironically enough, Uncle Murakami whom she so feared becomes an unlikely source of salvation, inviting Ofumi and Yoshi to join the company as a standup double act. Witnessing Ofumi reenact her romantic tragedy on stage as part of a routine forces Kenkichi to confront his moral cowardice. While the intervening years have seen Ofumi become cynical and bitter, still angry and resentful, Kenkichi has become weary and resigned. His parents have moved to the country, and he now runs the hotel, but he’s still not free. Hoping to convince Ofumi to come back, he invites his dad to meet their son but it becomes clear to her that Kenkichi will never change. He lacks the strength to reject his father’s authority, and as he’s abandoned her before he will likely do so again.

Kenkichi, perhaps meaning well, offers to take the child, pointing out that growing up among travelling players is an inauspicious start in life whereas he can bring the boy up with all the advantages of middle-class comfort. Ofumi is guilty in her immediate refusal, acknowledging that she may be denying her son a “better life” than she can give him, perhaps selfish in her reluctance to be parted from her child, but equally certain that she doesn’t want her son to grow up like Kenkichi, a spineless product of a patriarchal social order unable to stand up to his father or seize his own agency. She tells Kenkichi that she’s fallen in love with Yoshi because theirs is a partnership of equals, they understand and support each other, moving forward as one. He won’t abandon her by choice, but he isn’t perfect either and his foolish self-destructive impulses and selfless nobility threaten his new hope for the future as he embarks on a high risk strategy to prompt Ofumi to accept the “better life” that Kenkichi can offer her. Nevertheless, the point is that the choice is finally hers – no man is going to make it for her, not even her son. What she chooses is a kind of independence, stepping boldly forward into a future that’s entirely of her own making.