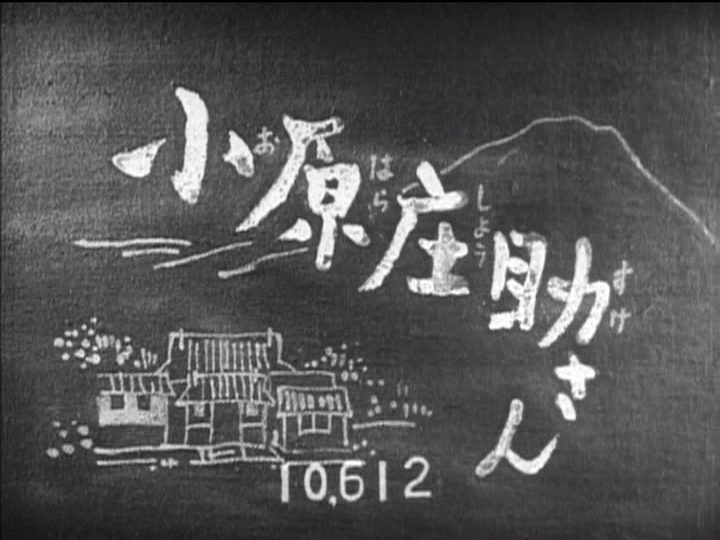 Ohara Shousuke-san (小原庄助さん) is the name of a character from a popular folk song intended to teach children how not to live their lives. The Ohara Shosuke-san of Aizu Bandaisan has lost all his fortune but no one feels very sorry for him because it’s his own fault – he spent his days in idleness, drinking, sleeping in, and bathing in the morning. The central character of Hiroshi Shimizu’s 1937 film has earned this nickname for himself because he also enjoys a drink or too and doesn’t actually do very much else, but unlike the character in the song this a goodhearted man much loved by the community because he’s a soft touch and just can’t refuse when asked for a favour. An acknowledgement of the changing times, Shimizu’s Mr. Shousuke Ohara is a tribute to the soft hearted but also an argument for action over passivity.

If you turn up one day and ask for directions to the Sugimoto household, everyone will look at you with confusion but if you ask for Mr. Shousuke Ohara everyone will gladly walk you over and introduce you. Saheita Sugimoto (Denjiro Okochi) is the head of a once proud samurai household but his fortunes are far from those of his ancestors. Despite his pecuniary difficulties, Sugimoto is good hearted man who wants to help everyone that he can (out of a sense of altruism rather than duty or vanity). Consequently he is deeply in debt and nearing bankruptcy yet he can’t give up any of his three vices – drinking, gambling, and generosity.

The nature of the changing times is at the centre of this 1949 film. As Sugimoto is fond of telling people, his noble house used to stand for something but all of that historical influence is next to meaningless now. Though Western dress is not uncommon, the village is pretty much as it’s always been – children play in the fields and Sugimoto travels everywhere by donkey. Other than the tale of Sugimoto’s fall from grace, the central narrative concerns an election for a new village chief. Yoshida, a youngish man, wants Sugimoto’s support for his election campaign. His main campaign policy is modernisation – the introduction of electricity, modern transportation and communications, as well as greater cultural involvement starting with opening Western style ballroom dance classes for the children. Unfortunately his policies are not that firm and his motto seems to be “I’ll do that first!” to all aspects of his plan which is not very encouraging but still the desire is very much to move away from old fashioned village life towards a more sophisticated urbanism.

This of course also means an end to the inherited influence of idle nobleman such as Sugimoto. Though he’s a kind man who likes nothing other than helping other people, Sugimoto has been a passive steward, more consumed with his own idle pursuits than with making an active attempt at leading the village. This passivity has contributed to his downfall as he’s neglected the business of maintaining his own fortune. After taking out numerous loans which he only ever uses to help the villagers, Sugimoto has let the estate which ancestors founded, and which he was supposed to look after in the names of all that have gone before and all were to come after him, slip away. The ultimate failure and a disgrace to his ancestors, this loss of the ancestral home is an unforgivable betrayal yet there is something in Sugimoto which seems to regard it as right and proper that it should go.

Change is coming to the village, even if it isn’t coming with the speed that a young man like Yoshida may be hoping for. Change is also coming to Japan which is in the progress of rebuilding itself anew following long years of folly followed by confusion. There is no room for genial idleness anymore. “If you can work honestly with your hands you can make a living”, Sugimoto tells two would-be-burglars that he invites in for a drink as a apology for not having anything left for them to steal, but means the advice more for himself than anyone else. It’s time to say goodbye to Shousuke Ohara and the burden of inherited privilege and chart a new course as Seihata Sugimoto. Finishing on another of Shimizu’s much loved road shots, Sugimoto, like his nation, walks confidently along the road to an uncertain future yet he is not alone as he goes and may make something of himself yet. 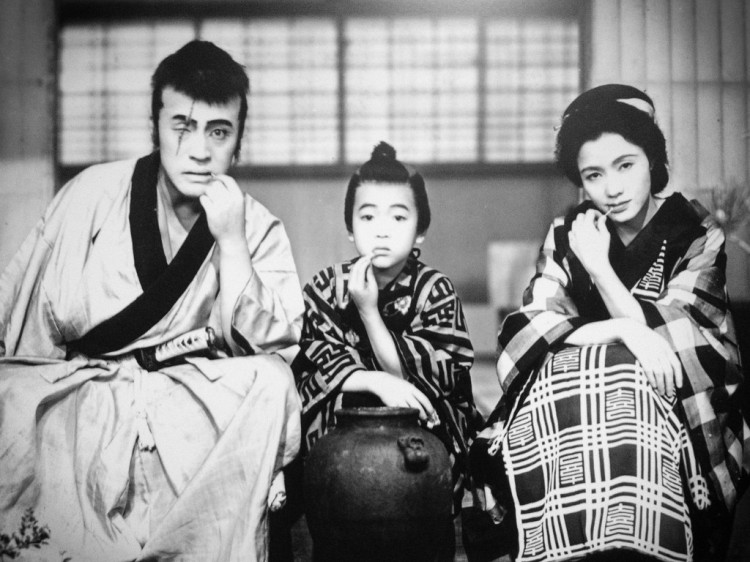 Sadao Yamanaka had a meteoric rise in the film industry completing 26 films between 1932 and 1938 after joining the Makino company at only 20 years old. Alongside such masters to be as Ozu, Naruse, and Mizoguchi, Yamanaka became one of the shining lights of the early Japanese cinematic world. Unfortunately, this light went out when Yamanaka was drafted into the army and sent on the Manchurian campaign where he unfortunately died in a field hospital at only 28 years old. Despite the vast respect of his peers, only three of Yamanaka’s 26 films have survived. Tange Sazen: The Million Ryo Pot (丹下左膳余話 百萬両の壺, Tange Sazen Yowa: Hyakuman Ryo no Tsubo) is the earliest of these and though a light hearted effort displays his trademark down to earth humanity.

The plot turns on the titular one million ryo pot when the local feudal lord inconveniently discovers that an ugly vase with a weird monkey pattern is actually a hidden treasure map just after he’s palmed it off on his younger brother as a kind of family heirloom. The brother, Genzaburo, is both angry and insulted that his vastly wealthy brother has given him such a worthless gift rather than the money which he feels he is owed. An underling is dispatched to try and get the pot back but Genzaburo is so annoyed about it that the pot gets sold before he finds out its value. The peddlers who buy it don’t know either so they give it to a little boy to keep his pet goldfish in. Eventually the boy comes into contact with Tange Sazen who is a popular character of the time known for the scar across his eye and lack of one arm. Round and round the pot goes but where it stops, no one knows – though in the end, it’s not the pot or even the treasure that really matters.

There’s something quite amusing about the central irony that this whole mess started with a stingy rich old man accidentally cheating himself out of a vast amount of money that he really didn’t need in the first place. Genzaburo does seem more like the impoverished and subjugated kind of samurai, but still he’s not exactly starving and has a large staff to support him. His concern is more with the humiliation he feels in the way he is treated by his brother. Truth be told, Genzaburo is a feckless and clumsy man who knows he has little talent or ability and continues to sulk about it. He’s even subjugated by his wife at one point after she discovers how much time he’s been spending at the local geisha house leading to another embarrassment when he tries to sneak back in late at night and is beaten up by his own servants who assumed he was a thief.

Indeed, Genzaburo repeatedly utters that finding the pot could take ten or twenty years – like a noble quest for justice! The truth being that he loses interest in the idea of actually finding it because it would mean an end to his life of “looking for the pot” which allows him to spend all his time shooting arrows with the ladies at the bar. In essence, Genzaburo is the harmless, childish kind of second tier samurai who complains about harsh treatment and lack of status but at the same time enjoys a life of leisure, indulging his personal whims and ignoring his feudal responsibilities as well as his family home.

Tange Sazen, by contrast, is well known from various other kinds of media as a loose cannon swordsman and wandering ronin gambler but here he’s more of a gruff but goodhearted ne’er do well. He seems to be in a fairly solid but perhaps unofficial relationship with the no nonsense owner of the archery-parlour-cum-geisha-palace, Ofuji, and together (more or less, after a lot of arguing and refusing) they take in the orphaned little boy, Yasu, who, unbeknownst to all, is keeping his prized goldfish inside the very pot which everyone is looking for. In fact, Genzaburo and Tange Sazen have been sitting next to it all along but entirely failed to notice.

This is just one strand of the film’s deeply felt humour as everyone fails to see what is staring them right in the face. Yamanaka proves far ahead of his time employing comedic techniques including frequent uses of what would later become know as a “bicycle joke” in which a character swears they’ll absolutely never do something only for the film to cut to them doing exactly that. Tange Sazen and Ofuji bicker endlessly – particularly about Yasu whom they’ve both become quite attached to despite their claims to the contrary. In addition to the frequent wipes and dissolves, Yamanaka’s direction is resolutely forward looking and inventive which, coupled with a more naturalistic acting style, lend it an oddly modern air for a film completed in 1935. Humorous and heartwarming with a little social commentary thrown in, Tange Sazen: The Million Ryo Pot is a wonderfully put together ensemble comedy which still proves hugely entertaining eighty years later.