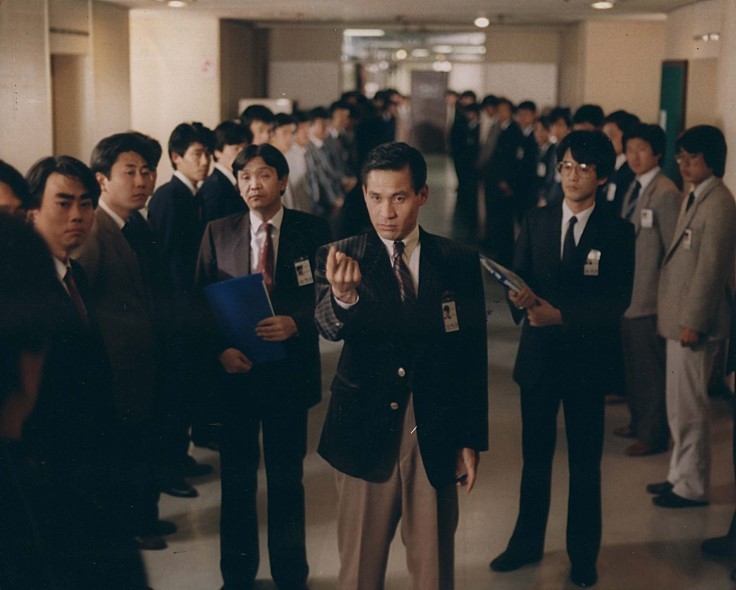 “Love only matters when you can sell it” in the nihilistic world of Jang Sun-woo’s The Age of Success (성공시대, Seonggong shidae). The Korea of 1988 was one of increasingly prosperity in which the recently democratised nation looked forward to a new era of freedom, hosting the Olympic Games as a calling card to the world stage. Like everywhere else in the ‘80s however it was also a time in which greed was good, time was money, and compassion was for suckers. Jang’s narcissistic hero worships Hitler and offers a nazi salute to a mockup of a high value note with his own face on it as he leaves for work every morning, but his relentless pursuit of “success” is destined to leave him empty handed when he realises the only commodity he can’t sell is sincerity.

The executives of Yumi Foods, a subsidiary of Mack Gang (Mighty) corporation, are looking for a bright new face through a series of individual interviews. The panel asks each of the prospective new hires to prove their sales ability by convincing them to buy something inconsequential they happen to have in their pockets. Each of the young men fails, until the sharply suited Kim Pan-chok (Ahn Sung-ki), whose name literally means “sales promotion”, dazzles them with a show of intense charisma. He simply offers to sell them whatever is inside his clenched fist. Such is his conviction, the CEO finds himself emptying his wallet, pouring out his credit cards, and eventually borrowing from his friends until Pan-chok is satisfied he’s getting all he could possibly get at point which he opens his fingers and reveals his empty palm. The bosses are annoyed, but quickly convinced by Pan-chok’s explanation that what he’s sold them is “sales spirit” which is, after all, the most valuable thing of all (not to mention exactly what they were looking for). Pan-chok is hired.

Later, we find out that Pan-chok’s routine is an ironic inversion of his childhood trauma. A poor boy abandoned by a mother who became fed up with his father’s fecklessness, he waited alone every day for his dad to come home with something to eat. But his dad was an irresponsible drunkard who could never hold down a job. Like Pan-chok, he held out his fist and told the boy to open his fingers but he was always empty-handed. Hating his father’s incompetence, laziness, alcoholism, and violence, Pan-chok decided that he had to be strong. “Poverty makes you low and pathetic”, he insists. Love, pity, and mercy are for people with no power. “The important thing is to be strong, to win, succeed, possess, and to dominate. Only then will I be happy”.

Pan-chok is a corporate fascist wedded to ultra capitalist ideology in which the only thing that matters is strength and the ability to dominate. He lies, and cheats, and misrepresents himself to pull every underhanded trick in the book to try and get ahead. He goes to war, quite literally, with industry rival Gammi, intent on completely destroying them in order to dominate the market by whatever means possible. Coming up with signature product Agma, he irritably tells his development team that none of their work really matters because the quality of the product is largely irrelevant. Just as in his interview, all Pan-chok is selling is false promise wrapped up in marketing spin. His rival goes on TV to talk the value of tradition to defend himself against a smear campaign Pan-chok has engineered to suggest his products are a health risk, but eventually gets the better of him by playing him at his own game and making a late swing towards ultra modernity.

Pan-chok’s main gambit is seducing a local bar hostess, Song Sobi (Lee Hye-young), lit. “sexual consumption”, and using her as a spy to get info on Gammi’s latest products, but Sobi falls in love with him only to have her heart broken when she realises Pan-chok will discard her when he decides she is no longer useful. He tells her that love is only worth something when you can sell it, but is confounded when she later turns the same logic back on him after selling her charm to seduce the son and heir of the Gammi corporation as a kind of revenge.

Proving that he never learns, Pan-chok’s last big idea is that the only way to beat Gammi’s technological solution is to commodify nature, to repackage and sell back to the people the very things he previously rejected in human sensation. By this point, however, he is so thoroughly discredited that few will listen. His new boss has an MBA from an American university and no time for Pan-chok’s scrappy post-war snake oil salesman tactics. “Only success can set you free”, Pan-chok was fond of saying, but it belied a desperation to escape post-war penury. What he wanted was freedom from hunger, anxiety, and subjugation. He wanted to be a big man, not a small one like his father who always came home empty-handed, so that no one could push him around. What he became was a man without a soul, empty-hearted, consuming himself in pursuit of the consumerist dream. Korea, Jang seems to say, should take note of his lesson.

The Age of Success was screened as part of the 2019 London Korean Film Festival.

Jang Sun-woo, a former political activist and underground filmmaker, is best remembered for formal experimentation and pointed social commentary, but his third feature The Lovers of Woomook-Baemi (우묵배미의 사랑, Umukbaemi Eui Sarang) stands out in his filmography in its fiercely naturalistic portrayal of working class life on the margins of a society in flux. Based on a novel by Park Yeong-han, The Lovers of Woomook-baemi is a classic melodrama with infidelity at its core but it’s also a story of futility, the destructive effects of patriarchal social codes and toxic masculinity, and the frustrated promises of a new era for those excluded from its various benefits.

Jang begins his tale in the middle as Bae Il-do (Park Joong-hoon), a frustrated husband, returns home late to a troubled “wife” (Yoo Hye-ri) who promptly kicks him out again. Complaining furiously, Il-do dreams of another woman, Gong-ryae (Choi Myung-gil), with whom he had a brief affair, idly thinking that he might have been happy if he hadn’t got his current partner pregnant and got himself stuck with her for life even if they aren’t technically “married” in the legal sense.

Moving backwards, we see Il-do, having failed in Seoul, returning to his home village with his common-law wife Sae-daek and infant child after an offer of work in a small seamstressing firm. The only man among a room full of mostly elderly women, Il-do is something of a novelty but is also taken by the woman on the machine next to him, Gong-ryae, who he later learns is also unhappily married and intensely lonely in her small town existence. After some initial indecision, the pair embark on an affair (still illegal at the time of the film’s release) but their prospects for future happiness seem slim given the restrictive quality of their lives.

The world that Jang depicts, for all its naturalistic flair, is intensely misogynistic. Il-do’s early recollections of Gong-ryae revolve around her bad marriage to an impotent man (Lee Dae-Geun) who mercilessly beats her – indeed, we later see her turning up for work after suspicion has arisen about her relationship with Il-do with a black eye and bruises on her face while the other women giggle over the obvious awkward gossip. Domestic violence is, however, just a part of life in the village and the older women in particular view it as a sign of a healthy marriage. One woman even exclaims that she wishes she had a man to beat her but thinks she’s unlikely to find anyone given her age and the fact that she already has numerous children.

Il-do, by contrast, proves somewhat popular among the ladies at the shop because of his relative lack of machismo. Like Gong-ryae, Il-do is also a victim of domestic violence – his wife beats, slaps, and attacks him verbally, later even dragging home home by the testicles along a very public walk of shame. He is not above violence or aggression but as in much of Jang’s work, male violence is a sign of weakness rather than strength and each of Il-do’s violent episodes is more to do with defeat and repressed emotion than it is about strength or conquest. This also seems to be true for Gong-ryae’s husband whose violence and jealously is perhaps a reaction to his impotence, but when we later meet him we find a man much like Il-do. Chastened, Gong-ryae’s husband politely asks the man who bedded his wife if he knows where she is and if he sees her to please tell Gong-ryae that he’s sorry and wants her to come home.

As he does with Gong-ryae’s husband, Jang plays with our sympathies and allegiances, switching perspective to reveal to us that villains and victims are often one and the same. Sae-daek originally seems like our villain – a shrewish, henpecking “wife” who won’t let our hero go despite the evident toxicity of the pair’s non-marriage, but seen from her point of view we understand her plight. After running away from a violent home environment she winds up a bar hostess in the city where she builds up a spiky relationship with Il-do which goes south when he gets her pregnant. Despite this being the age of illegal adultery, it’s not so much a marriage certificate that binds a man and a woman together for good or ill but a child. As a neighbour puts it, a woman might leave her husband, but what sort of woman leaves a child? Sae-deok cannot care for her child alone and she cannot abandon it with Il-do and so she must keep him no matter how much personal suffering she must endure as the common law wife of a no good philandering ne’er do well.

Il-do likes to drift off into philosophical reveries in which he idly remarks on the futility of his existence, but in a very real sense he’s not wrong. He tried life in the city but it didn’t want him and he came home. Sae-deok, oddly enough, likes it in the village with its sense of community especially among the other put upon and oppressed women who attempt to support each other (whilst accidentally supporting the mechanisms which continue to oppress them), but there’s no pretending there’s anything more to life in Woomuk-Baemi than work and drink. Il-do knows this, as does Gong-ryae, and it’s their mutual sense of existential ennui which finally forces them together in an impossible attempt to rebel against the futility of their existence through transgressive sex and an attempt at emotional connection.

In the end, Il-do is dragged (by the short and curlies) back into the past – literally, as Sae-deok takes him back to his mother’s house to complain about the terrible way she’s been treated. Creating a scene outside, Sae-deok eventually manages to get through to her mother-in-law who had previously rejected her because of her lowly peasant background and history of sex work, enabling the two women to bond in their shared disappointment with Il-do who has now failed as a “man” on every possible level. Briefly reuniting with Gong-ryae in the greenhouse in which they used to meet, now reduced to ruins, Il-do declares that his love is like a mummy – wrapped so well it will endure for thousands of years without decay, but it’s already too late. Choices have been made, implicitly, which cannot be reversed. Jang leaves his protagonist where he started – frustrated and inert, suffering without hope in an oppressive environment which he knows, in his heart, he does not possess the courage to resist.