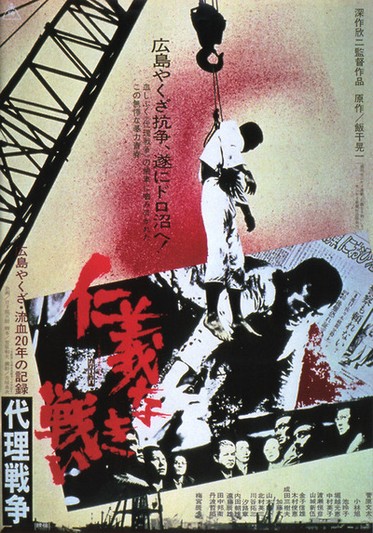 Three films into The Yakuza Papers or Battles Without Honour and Humanity series, Fukasaku slackens the place slightly and brings us a little more intrigue and behind the scenes machinations rather than the wholesale carnage of the first two films. In Proxy War we move on in terms of time period and region following Shozo Hirono into the ’60s where he’s still a petty yakuza, but his fortunes have improved slightly.

It’s now 1960 – almost 15 years since Hirono came home from the war. The young people who are just coming of age grew up in the turbulent post-war era but probably don’t remember much of the conflict itself. These days the problem is the ANPO treaty and the wider world’s pre-occupation with communism. Russia and America are engaged in various “proxy wars” across the world in what would come to be known as the cold war. This tactic of indirect warfare has also taken root in the yakuza world as gangs and gang members form covert alliances, hatch secret plots to take out rivals, or otherwise try to manipulate the situation to their advantage. When the head of the Muraoka crime syndicate is assassinated in broad daylight and his underling, Uchimoto, does nothing, it kickstarts a chain of petty vendettas as each of the ambitious crime bosses vie to fill the power vacuum with the snivelling Uchimoto not least among them.

Bunta Sugawara returns to centre stage again with Hirono at the forefront of the action. One of the few yakuza guys who’s pretty happy with his lot and not seeking a higher position he’s in the perfect spot to become a very important player when it comes to supporting other people’s bids for power. Having originally backed Uchimoto he’s at something of a disadvantage following Uchimoto’s cowardly flip-flopping. However, having found himself back under the aegis of former boss Yorimoto, it does afford Hirono the possibility of finally getting revenge against him. Gangs merge several times while fracturing on the inside as the lower bosses try to get their guys in line whlst picking sides as to whom they support in the leadership battles (some with more of an eye on their own futures) but this time the action is a little more cerebral than the audacious violence of the immediate post-war period.

Changing up his style slightly, Fukasaku keeps the overall documentary approach with the news reel voice over relating the salient political and historical details plus the initial captions explaining the names and allegiances of the major players but reduces the freeze frame death announcements. The action is still frenetic with ultra naturalistic handheld camera and occasional strange angles but this time he opts for a muted colour effect in the final shoot out which increases the shocking nature of the scene. Blow for blow there’s less overt violence here though there is a fairly graphic and unpleasant rape scene which feels a little out of place though it does add to Fukasaku’s argument about the nature of aggression.

Once again the ruined the dome looms large over everything, reminding us that this isn’t just a story of gang warfare but a critique of the senselessness of a violent life. As the film says, young men are the first to die when the battles begin but their deaths are never honoured. Like Hiroshima Death Match, Proxy War also leads to the death of a youngster in pointless gang violence – another young man who ended up in the criminal underworld through lack of other options. The futility of the cycle of violence is becoming wearing – as is perhaps the point. One gang boss falls, another rises – only the names have changed. There’s no rest for an honest yakuza like Hirono when the less scrupulous are willing switch allegiance without a second thought. The only victory is staying alive as long as you can.

Proxy War is available on blu-ray in the UK as part of Arrow Video’s Battles Without Honour and Humanity: The Complete Collection box set.