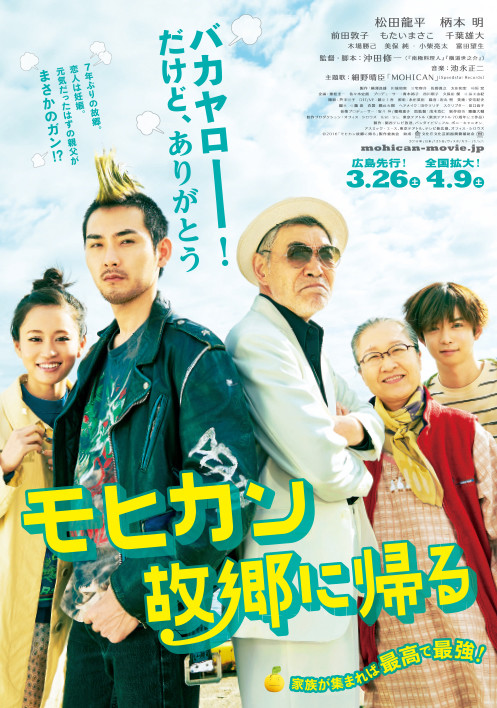 Japan may be famous for its family dramas, but there is a significant substrain of these warm and gentle comedies which sees a prodigal child return to their childhood home either to rediscover some lost aspect of themselves or realise that they no longer belong in the place which raised them. Shuichi Okita’s The Mohican Comes Home (モヒカン故郷に帰る, Mohican Kokyo ni Kaeru) includes an obvious reference in its title to Keisuke Kinoshita’s colourful 1954 escapade Carmen Comes Home which cast legendary actress Hideko Takamine somewhat against type as a ditsy airhead show girl eager to show off all her city sophistications to the rural backwater she abruptly ran out of some years before. Like Carmen, the hero of Mohican Comes Home makes an unexpected trip to visit his family in the picturesque Hiroshima island village where he grew up only to find not very much has changed but an equally unexpected tragedy prompts him into a wider consideration of his past and future as he faces life’s two extremes in the very same moment.

Eikichi (Ryuhei Matsuda) left his island home some years ago for the bright lights of Tokyo where he fronts a punk band by the name of Grim Reapers. The band has some moderate underground success, but the guys are getting old for the punk scene and finding themselves with real world responsibilities from healthcare costs to the prospects of supporting wives and children. Eikichi, sporting a prominent bleached mohawk, feels this more than most as he’s soon to become a father and is intending to marry his pregnant girlfriend, Yuka (Atsuko Maeda), if only he had the money. He’s been promising to take his future wife to meet his parents for some time but so far they’ve never actually made the trip.

This time, things are different and so Eikichi makes a shocking return after seven years only to wander in during an awkward scene as his mother and younger brother try to manoeuvre his drunken father into a more convenient position whilst protecting his precious white suit from alcohol born ruin. Eikichi’s family own the village liquor store but his father’s passion is for music and he also coaches the local middle school band. A devotee of legendary Hiroshima born superstar Eikichi Yazawa, Osamu (Akira Emoto) insists the kids play his favourite tune ad nauseam to much eye rolling from the youngsters forced to associate themselves with such an uncool and old fashioned song.

Eikichi’s homecoming has not got off to the best start, especially after his father begins to sober up and recommends a hair cut and real job, both of which Eikichi resolutely refuses. Things take a more serious turn when Osamu realises his son is being financially supported by his girlfriend whom he has also got pregnant but is not yet married to. Experiencing extreme moral outrage at his responsibility shirking son, Osamu chases him around the table in what appears to be a scene often repeated during Eikichi’s childhood but the situation soon ends in an unexpected way foreshadowing Osamu’s decline into ill health.

Deciding to stay a little longer than intended, Eikichi and Yuka blend into the family home trying to help mother Haruko (Masako Motai) and boomerang younger brother Koji (Yudai Chiba) adjust while Osamu is in the hospital. The contrast between town and country, traditional and modern is never far from view whether in Yuka’s kindhearted decision to finish off preparing the family dinner though she has to consult a youtube video to find out how to gut fish, or in her astonishment at the very ordinary way in which her future in-laws met (i.e. simple propinquity). While the women begin to bond over their shared concern for their men as Haruko decides to teach Yuka some home style tips and tricks, Eikichi and his father spar with each other warmly as Eikichi takes charge of a band rehearsal and allows them to let loose on the much hated song with an energised punk fuelled twist.

Despite a strained relationship with his father, Eikichi is a good person who also wants to offer some kind of comfort to the old man in his final days. Going to great lengths to track down a particular pizza Osamu suddenly requests (the last time he ate pizza was on his 60th birthday) or eventually pretending to be Yazawa himself whom Osamu is very proud to have made eye contact with during a Tokyo concert in 1977, Eikichi comes to a kind of understanding of the man his father was as well as the man he is. Full of warm, naturalistic humour giving way to two elaborately constructed set pieces, The Mohican Comes Home is a typically well observed family drama from Okita which neatly undercuts its essentially melancholy set up with a layer of stoical perseverance.

Screened as part of the Japan Foundation Touring Film Programme 2017.