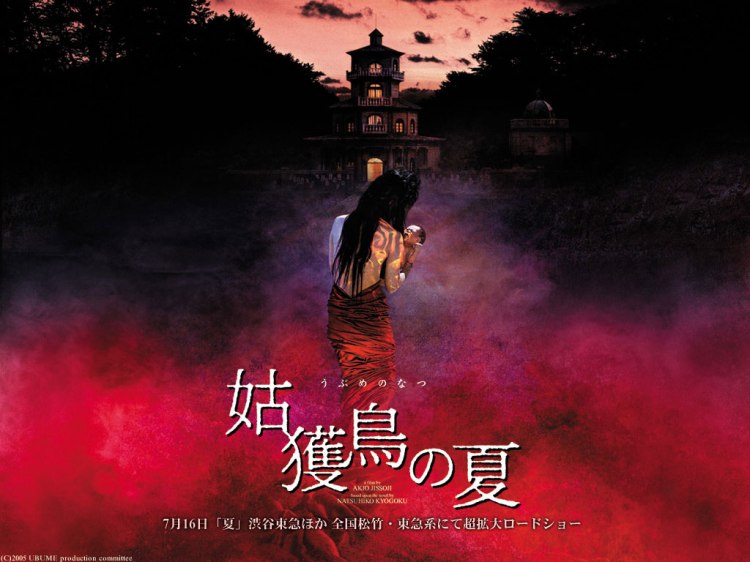 Akio Jissoji has one of the most diverse filmographies of any director to date. In a career that also encompasses the landmark tokusatsu franchise Ultraman and a large selection of children’s TV, Jissoji made his mark as an avant-garde director through his three Buddhist themed art films for ATG. Summer of Ubume (姑獲鳥の夏, Ubume no Natsu) is a relatively late effort and finds Jissoji adapting a supernatural mystery novel penned by Natsuhiko Kyogoku neatly marrying most of his central concerns into one complex detective story.

Freelance writer Tatsumi Sekiguchi (Masatoshi Nagase) and occult expert Kyogokudo (Shinichi Tsutsumi) become intrigued by the bizarre story of a woman who has apparently been pregnant for twenty months. If that weren’t enough weirdness, the woman’s husband also went missing a year ago and now her sister has approached the pair hoping they can investigate and figure out what’s really going on. Unbeknownst to him, Sekiguchi has a longstanding connection with several of the people involved and himself plays a role in the central mystery. Demons foreign and domestic, past trauma, infanticide and multiple personality disorder are just some of the possible solutions but as Kyogokudo is keen to remind us, there is nothing in this world that is truly strange.

The mystery conceit takes the form of a classic European style detective story complete witha drawing room based finale in which each of our potential suspects is assembled for Kyogokudo so that he can deliver his final lecture and tick them all off the list as he goes along. The tale takes place in the summer of 1952 and so the spectre of Japan’s wartime past, as well as its growing future, both have a part to play in solving this extremely complex crime. The original supernatural question concerns two otherworldly entities which have become conflated – the Chinese Kokakucho which abducts children, and the Japanese Ubume which offers its child to passersby. Needless to say, the answer to all of our questions lies firmly within our own world and is in no small part the result of relentless cruelty masked as tradition.

The opening scene includes a lengthy discussion between Kyogokudo an Sekiguchi debating the nature of reality. We only experience the world as we perceive it, seeing and unseeing at will. Everybody, to an extent, sees what they need to see, therefore, memory proves an unreliable narrator when it comes to recalling facts which may run contrary to the already prepared narrative.

Jissoji brings his trademark surrealist approach to the material which largely consists of interconnecting flashbacks often intercut with other dreamlike imagery. Filming with odd angles and unusual camera movements, Jissoji makes the the regular world a destabilising place as the strange mystery takes hold. The canted angles and direct to camera approach also add to a slight hardboiled theme which creeps in around the otherwise European detective drama though this mystery is much more about solving a series of puzzles than navigating the dangerously dark world of the noir. That said this is a very bleak tale which, for all its frog faced children weirdness, has some extremely unpleasant human behaviour at its roots.

Supernatural investigator Kyogokudo quickly dispenses with the demonic in favour of the natural but the solutions to this extremely complicated set of mysteries are anything but simple. Making space for the original novel’s author to show up as a travelling picture storyteller with some Shigeru Mizuki inspired illustrations on his easel, Summer of Ubume is not entirely devoid of whimsy but its deliberately arch tone is one which it manages to make work with its already bizarre set up. The enemy is the unburied past, or more precisely the unacknowledged past which generates its own series of ghosts and phantasms, always lurking in the background and creating havoc wherever they go. Occasionally confusing, Summer of Ubume is a fascinating supernatural mystery which takes its cues much more from European detective stories and gothic adventure than from supernatural horror or fantastical ghost story.

Natsuhiko Kyogoku’s source novel is available in an English translation by Alexander O. Smith (published by Vertical in the US).